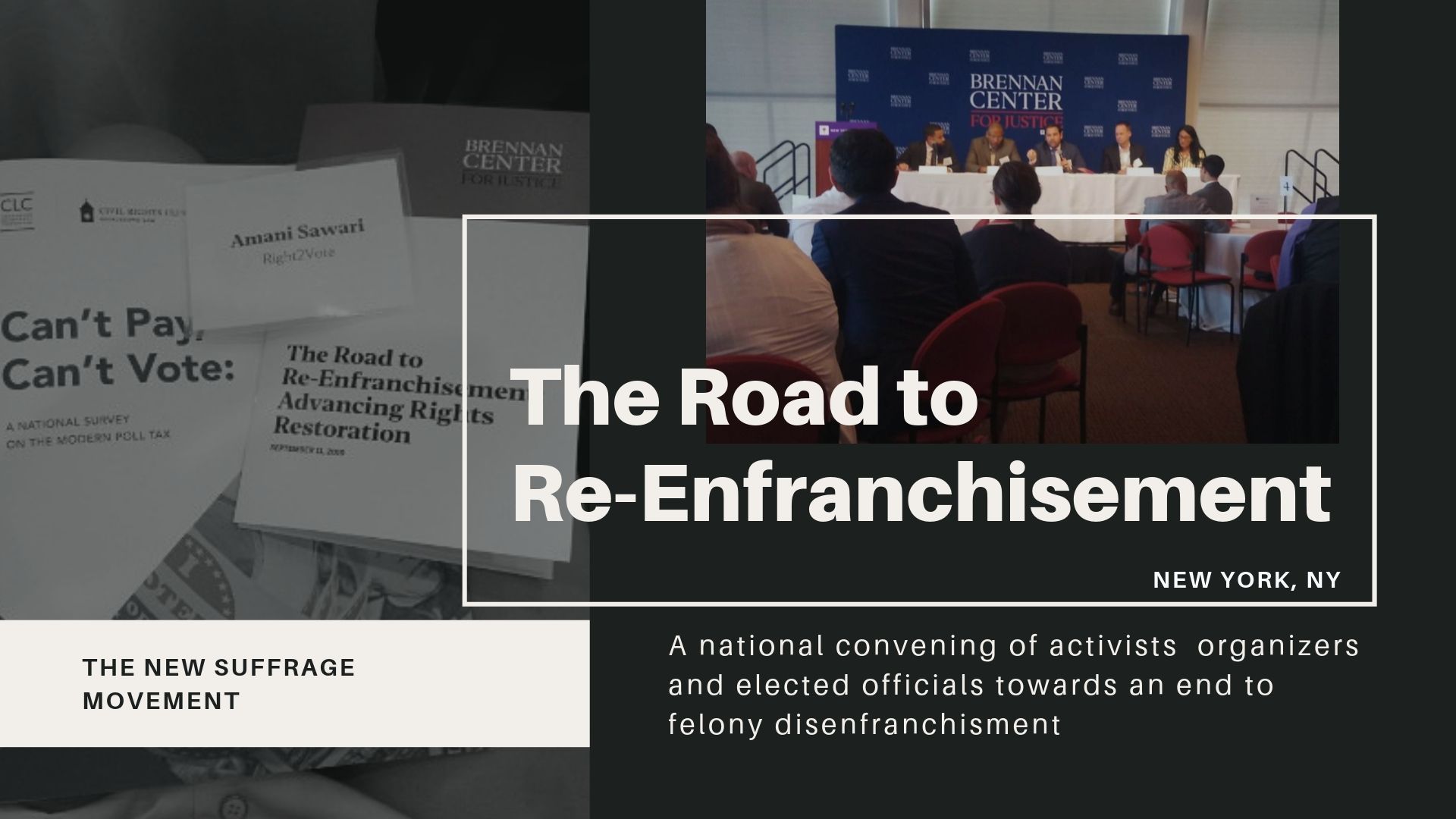 This week was called by Jailhouse Lawyers Speak (JLS) to be Unchain the Vote Week focused on bringing attention to the unconstitutional, dehumanizing act of felony disenfranchisement that plagues 48 of the 50 United States. During this week outside organizers hosted and attended events in solidarity with inside organizers’ call. One of the events I attended was the Brennan Center’s Voting Rights Symposium, The Road to Re-Enfranchisement: Advancing Rights Restoration. The event was a closed invite only collaboration between New York and New Jersey attended by aligned organizations across the country including grassroots organizers like Initiate Justice, Emancipation Initiative and Millions for Prisoners (all of which are apart of the Right2Vote Campaign) as well as larger organizations like Demos, the Vera Institute and Common Cause. The Brennan Center created space or people across the country to share ideas in favor of ending felony disenfranchisement as well as to evaluate the outcomes from Florida’s Amendment 4 that passed in November. The event included three panels, a keynote speech by New Jersey Governor Phil Murphy and a final closed session for impacted persons.

What is the legislative intent of the law?

I appreciated the Brennan Center’s bringing together voices from a wide range of perspectives as panelists to speak on the issue. The first panel, How to Bring Everyone Along, included Anthony Dixon Director of Community Engagement for the Parole Preparation Project (NY); Arthur Rizer Director of Criminal Justice and Civil Liberties for R Street Institute (KY); Pastor Jim Liske, founder of Movement.org; and Sarah Walker, founder of the Minnesota Second Chance Coalition. This panel focused on the importance of making sure that everyone’s voice is heard within our society regardless of their past. Dixon described voting rights as, “the epicenter of all rights”, emphasizing the fact that without voting rights there is no citizenship. This is especially true for one living in a democracy that is founded on the principal of every citizen’s voice being heard. The lack of one having the privilege of making contributions on the legislation that governs them equates to a complete lack of citizenship. With this new understanding for many residents living in this democracy the title “citizen” is just an empty label. Incarcerated citizens in 48 states, paroled citizens in 25 states, citizens on probation in 23 states, and convicted felons in up to 8 states that are without voting rights are essentially not citizens at all. This population of invisible citizens equate to more than 6 million people that are not equipped with the rights that would validate their citizenship within a democracy. The panel posed these questions to everyone in the room, “What is the legislative intent of the law” and “Should civil rights stop at the prison door?” When we ask ourselves these questions there is where we will find our validation or lack thereof for felony disenfranchisement.

The Brennan Center did an incredible job highlighting the experiences of impacted people by not only inviting them to the conference but by also ensuring that they were on center stage. Every panel included someone who was formally incarcerated and questions were directed toward them with a focus on how restored voting rights had a positive impact on their reentry journey. The second panel, Watch Out for Carve Outs, included Rachel J. Anderson, General Council for the office of the Nevada Attorney General where legislation recently re-enfranchised 70,000 formally incarcerated people; Alexes Harris a professor from the University of Washington; Bruce Reilly Deputy Director for Voice of the Experienced, a now robust outside organization that was initiated during his incarceration at Angola Prison and Andrew Warren from the 13th Judicial Circuit State Attorney.

This discussion focused on cautioning organizers of the types of comprises that legislators attempt to make when deciding whether to pass restoration legislation. The most popular types of carve out, which were also included in Amendment 4, are populations with homicide or sexual assault convictions. As an advocate for full enfranchisement, the type of crime that someone is convicted of should not play any factor in their voter eligibility. The carve out discussion was unsettling for me because it seemed as though there was an acceptance by some for the necessity of craving out certain populations in order to save others. There was certainly a divide in the room, people who saw carve outs as a strategy toward achieving a larger goal and others who viewed carve outs as a lazy compromise.

Should civil rights stop at the prison door?

An effective resolution to the issue of carve outs would be, organizers changing their initial ask. Many states are introducing bills to restore voting rights to formally incarcerated populations, those on probation and parole, with the hope of it passing though congress as is. However, many controversial issues, especially in within the realm of criminal justice reform never pass as is, there will most likely be some type of compromise. In negotiations, knowing that we want a lower price for an item we will always ask for much less than we’re willing to pay hoping that the seller will meet us in the middle. With that understanding, we need to ask legislators much more than they’re willing to give in order for them to meet us in the middle. If we ask for partial restoration, our middle ground will have carve outs. Those carve outs will be difficult for us to restore in years to come and it could take much longer than we expect in order to restore the rights of those populations.

In order to address this I suggest we introduce bills for full enfranchisement with the restoration of prisoners voting rights along with that of those on probation and parole, using Vermont and Maine as examples. This way we present our end goal, the intent of the people and any compromise would most likely be partial restoration of released populations without any carve outs. When we ask for more we will get more and the final end goal is full restoration so why not ask for it? The 10th demand of the National Prison Strike, for which many were inspired, called for the rights of prisoners to be restored so rather than going piece meal we need to get discussions happening in our state legislatures now. Our country is more focused on criminal justice reform than it has ever been, now is the time to capitalize on this moment.

January. Congress, in partnership with the New Jersey Institute for Social Justice answered the call with an even greater ask, a complete end to felony disenfranchisement all together. Murphy did not address that ask of organizers during his keynote. He praised New Jersey as a leading state as, “a proving ground for progressive ideals” with the strongest gun laws in the nation, willing to provide government funding to dreamers seeking a higher education. The Governor called felony disenfranchisement, “a needless prohibition that prevents successful integration”.

In alignment with Governor, the Brennan Center’s did not publicly endorse prisoners voting rights being restored but they did not dismiss it and embraced conversations about full enfranchisement by panelists during the third panel, Next Generation Fights,  panelists included Justin Allen, a community organizer with Millions for Prisoners’ New Mexico Chapter; Juan Cartagena, President of the Latino Justice PRLDEF; Patty Kuderer Washington State Senator from the 48th Legislative District who introduced SB 5056 to restore people’s voting rights once they’re released from prison. Allen, who’d been incarcerated for 17 years expressed his frustration with the fact that there is nothing that one learns in prison that is useful in the outside world. There is a code of silence in prison that is enforced by disenfranchisement that he called a “civic death”. Catagena made an appoint to respond to Governor Murphy’s claim that New Jersey was a leading state saying that with already 17 states having enfranchised probationers and parolees, doing so at this point would not make New Jersey a leader, but embracing S2100 as is and ending felony disenfranchisement entirely would support that claim. Murphy was no longer in the room, but the message was clear. New Jersey has a unique and timely opportunity that many states with closed sessions do not and the legislature should capitalize on it. New Jersey can be a leader as the first state to restore prisoners voting rights in American history (Maine & Vermont never took away prisoners voting rights) and end felony disenfranchisement that was imposed in 1844.

How Do We Engage Conservative Perspectives?

The Brennan Center gave activists, organizers, politicians and elected officials the unique opportunity to come together and discuss one of the most critical political issues of our time, a conversation that was not even considered even five years ago. There was a meeting of the minds between conservatives, liberals and abolitionists in the shared space that built collaborative relationships within this New Suffrage Movement. One of the most significant takeaways was a new understanding in the way that support is shaped from the conservative perspective. Rizer, a former prosecutor, police officer and member of the Conservative Libertarian Movement expressed his frustration with the fact that disenfranchisement makes us less safe as a society. Constitution embracing right-wingers can recognize the unconstitutionality of felony disenfranchisement. They also understand that when formally incarcerated people are further marginalized civilly, they’re more likely to engage in crime. With regret Rizer shared that during both his 9 years as a prosecutor and 20+ years as a police officer he never once visited a prison. Like he, many working on the prosecution side never see the consequences of their decisions at any point during their career. There is a dangerous disconnect between those who inflict the pain of prosecution and those who are forced to endure it.

Along with this, I also valued the perspective Pastor Liske shared with his own failure as a leader in the faith community to the injustices of incarceration. Liske did not feel the need to participate as an activist until his own nephew was incarcerated. It was then that he began to mobilize communities of faith including Christian, Catholic and Muslim houses of worship, against the prison industrial complex. Liske’s story is one that I hear often from people who have the privilege of ignoring mass incarceration until it hits home. It’s a sad reality that many choose to turn a blind eye to mass injustices that they’re aware of just because they aren’t directly impacted. “The spark of divine is in every individual” Liske said and that is a source of dignity that we should not deny any person, regardless of their conviction. It shouldn’t take being swept up by the system or a loved one being held captive in order to want to fight against its injustices.