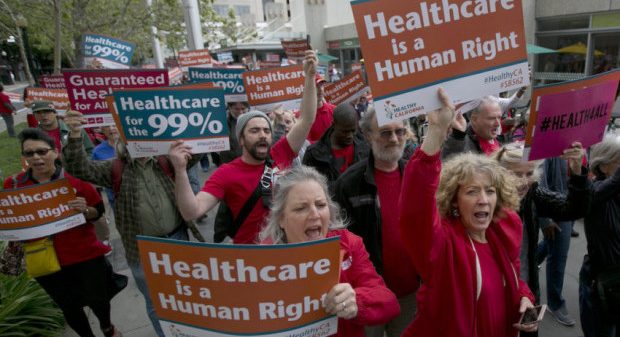 Russell Mokhiber, of Corporate Crime Reporter and Single Payer Action, wrote an article published in Common Dreams, Advocates Call on Jayapal to Release Draft Text of House Single Payer Bill, (published below) about Health Over Profit for Everyone’s call for a transparent and participatory process for the rewriting of HR 676. See, Letter to Congresswoman Jayapal – Release the text of HR 676.

HOPE created a tool for you to use to Call Rep. Jayapal and urge her to release the text. When you contact her office, let them know about how the Green New Deal draft legislation has been made public.

She should also understand that people are angry that a small group of insiders and her staff are writing a bill that will impact every person in the United States and if she does not make the text public quickly, that protests are sure to follow. The single payer movement wants to be allies with Rep. Jayapal and will build the movement to pass the bill, but it cannot do so if we are shut out of the process. The movement needs a bill we can fully support.

“We are being asked to mobilize support for the new HR 676, but we cannot support a bill we have not seen.”

Single payer advocates are calling on Congresswoman Pramila Jayapal (D-Washington) to share the draft text of HR 676 with the single payer movement for review and input.

Jayapal is the new lead sponsor of HR 676, which for the past fifteen years was sponsored by former Congressman John Conyers (D-Michigan).

“We urge you to release a draft copy of the new legislation before the end of the year so people can have input before it is made final,” they wrote. “We are being asked to mobilize support for the new HR 676, but we cannot support a bill we have not seen.”

“We understand that you are rewriting HR 676 before you introduce it in 2019. It is important to us that HR 676 not be weakened in this process, but be made stronger. We ask that you release a draft of the text of the revised HR 676 so that longtime single payer advocates can read it and share our views with you before the bill is introduced.”

“Transparency matters greatly to us as does getting the policy right. HR 676 must be strong from the outset so that as it goes through the legislative process, we can be sure the final bill will solve the healthcare crisis in the United States.”