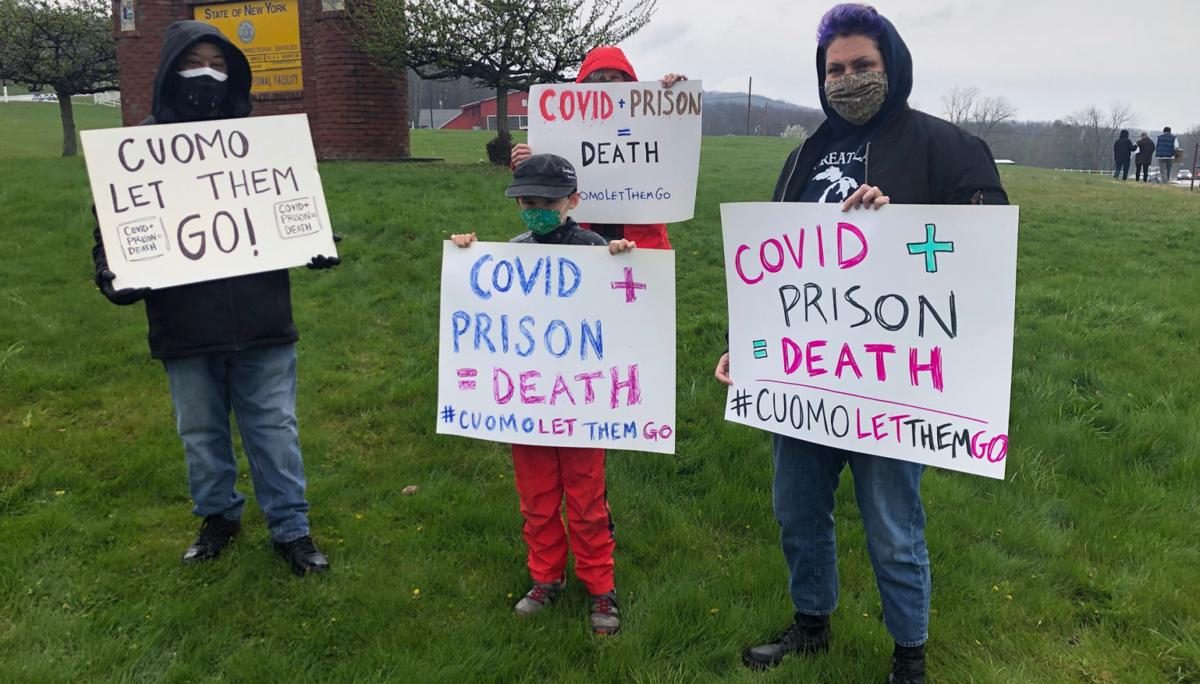 Albany – Advocacy groups are urging the state to release more inmates from prisons in an effort to stem the spread of COVID-19 in correctional facilities.

Supplies of personal hygiene products such as soap, hand sanitizer and face masks are in short supply, advocates said.

Prison reform advocates met Tuesday in a Zoom teleconference call to campaign for changes in the correctional system in response to the outbreak.

“COVID-19 is ravaging communities across the state, across the country, and across the globe, and causing devastation like many of us have never seen before. This is especially so in prisons, jails and detention facilities where rates of infection are higher than that of the general population, where social distancing is near impossible, and where little attention has been paid, especially here in New York,” said moderator Rodney Holcombe, from the advocacy group FWD.us.

There were 401 confirmed COVID-19 cases among inmates in state prisons as of May 4, according to the state Department of Corrections and Community Supervision website. Of those, 202 have recovered and were released from isolation. Twelve inmates and four staff members have died from the virus.

More needs to be done to protect inmates at state-run facilities, advocates said.

“Thousands of vulnerable New Yorkers incarcerated in state prisons are subject to dangerous and in many cases deadly conditions during this pandemic, and little is being done to ensure their release or to see that there are improved conditions for those inside,” Holcombe said.

On April 26, Cuomo questioned releasing violent prisoners or inmates who recently started their sentence. Nonviolent inmates with less than a year remaining on their sentence are eligible for release.

“That’s what we’ve been doing,” Cuomo said. He would not elaborate when pressed about the topic.

The Legal Aid Society sent a letter to Cuomo on April 28 demanding he and DOCCS immediately release 10 pregnant women incarcerated at Bedford Hills Correctional Facility in Westchester County to protect them from COVID-19. All are serving sentences for nonviolent crimes and are set to be released within a year, according to the society.

Advocates urge the governor to do more.

“My daughter was sentenced to 15 years to life. That doesn’t mean 15 years to death,” said Donna Robinson from Release Aging People in Prison Campaign.

Assemblywoman Carmen De La Rosa, D-72, was one of 46 Assembly and Senate representatives who penned a letter to the governor calling for more inmates to be released in light of the public-health crisis.

“The rules that apply to us all do not apply to the people that are incarcerated,” she said.

“The governor has identified merely 1% of those who could have clemency in our state. We are calling for him to do more,” De La Rosa said.

“Public-health experts across the country have been very clear that the only way we will be able to effectively curb the spread of coronavirus in our prisons is to get people out,” Lewin said.

Prisons are not equipped to handle the growing number of coronavirus cases, said Dr. Robert Cohen, a commissioner with the New York City Board of Corrections.

“There is a fundamental public-health approach to COVID-19 in confined spaces like New York state’s prisons, and that is to get as many people out as possible, as quickly as possible,” Cohen said.

Social distancing and having enough personal protection equipment, or PPE, are critical, he said.

He predicted the number of cases will ultimately “overwhelm” the prison system.

There has also been concern over staff members contracting COVID-19. As of May 4, there were 1,117 staff at correctional facilities who tested positive.

“For weeks we lobbied DOCCS to provide all staff with PPE’s,” Miller said. “On April 1, DOCCS allowed staff to bring their own PPEs into the facilities in situations where DOCCS didn’t provide them. Shortly after that decision, DOCCS agreed to provide all staff with PPEs. The union also purchased over 100,000 surgical masks for members to supplement what the department was providing.”

Beginning April 9, all inmates have been issued handkerchiefs to serve as face masks during the outbreak, according to DOCCS.

“Incarcerated individuals subject to quarantine are issued a surgical-type mask to further reduce the risk of any secondary transmission of COVID-19. The general population can now use state-issued handkerchiefs as masks,” according to DOCCS.

Advocates have protested in Albany to plead their case. Protestors gathered outside Cuomo’s Albany residence, the Governor’s Mansion on Eagle Street, on April 21, demanding the governor grant mass clemencies to imprisoned New Yorkers in COVID-19’s most vulnerable populations — senior citizens and people with underlying conditions or compromised immune systems.

“He [Cuomo] wants to release people 55 years and older who don’t have violent crimes or haven’t completed a sex offense,” Thomas Kearny with the RAPP Campaign said outside the mansion. “The governor has to go a hell of a lot farther than that. His guidelines discount 98% of the elders in prison.”