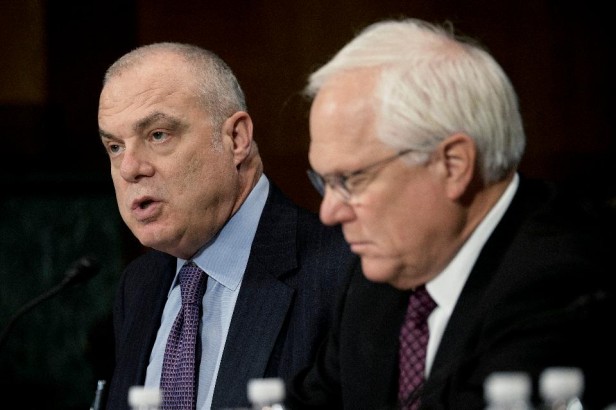 Aetna Will Abandon Obamacare Patients In More Than 500 U.S. Counties

There are lots of ads mixed in that you have to take out of the posting.

Note: The decision of Aetna and other large insurers to leave the Affordable Care Act public exchanges shows that the country needs to move rapidly to an improved Medicare-for-All single payer system. The desire for extreme profits by the insurance industry makes massive government subsidies and large increases in people forced to buy insurance inadequate for this voracious industry. Furhter, we do not need the insurance industry. It is a middleman that adds nothing to healthcare but makes up 30% of the cost of healthcare from its own overhead and the bureaucratic complexity it creates for hospitals, doctors and other providers. These problems will persist until lawmakers face up to the insurance industry, pharmaceutical industry and investor-based for-profit hospitals.

Aetna said it will reduce by more than 500 U.S. counties its participation in public exchanges under the Affordable Care Act in the face of hundreds of millions of dollars in losses.

In 2017, Aetna said it will be in just 242 counties, down from 778.  Aetna will remain on-exchange in just four states: Delaware, Iowa, Nebraska and Virginia, compared to 15 states where it operates this year.

Monday night’s announcement comes after Aetna AET -0.20% said earlier this month that it would evaluate all of its individual plans in 15 states. Humana HUM +0.00% has already said it is pulling off most ACA exchanges for next year. And rival UnitedHealth Group UNH -0.38%, too, is scaling back to three states, leaving Anthem WLP +%and Blue Cross and Blue Shield plans as the main Obamacare providers across the country.

“Following a thorough business review and in light of a second-quarter pretax loss of $200 million and total pretax losses of more than $430 million since January 2014 in our individual products, we have decided to reduce our individual public exchange presence in 2017, which will limit our financial exposure moving forward,” Aetna chairman Mark Bertolini said in a statement. “More than 40 payers of various sizes have similarly chosen to stop selling plans in one or more rating areas in the individual public exchanges over the 2015 and 2016 plan years, collectively exiting hundreds of rating areas in more than 30 states. As a strong supporter of public exchanges as a means to meet the needs of the uninsured, we regret having to make this decision.”

Aetna said it will continue to offer “off-exchange” individual products in “the vast majority of counties” where it offers “on-exchange” products currently. Aetna said it would be informing its individual customers this fall during open enrollment when they can choose new benefits for 2017.

Despite the decision, Bertolini said he was encouraged by last week’s announcement by the Obama administration that it was taking steps to shore up risk pools. Insurance have complained not enough healthy and young people are buying policies to cover the mounting costs of sick Americans buying policies on the exchange. Therefore, the risk pools are unstable and triggering major losses, insurers say.

Still, the Obama administration said Monday night it remains confident in the future success of the public exchanges despite Aetna’s move.

“Aetna’s decision to alter its marketplace participation does not change the fundamental fact that the Health Insurance Marketplace will continue to bring quality coverage to millions of Americans next year and every year after that,” Health Insurance Marketplace CEO Kevin Counihan said in a statement. “It’s no surprise that companies are adapting at different rates to a market where they compete for business on cost and quality rather than by denying coverage to people with preexisting conditions. But the ACA Marketplace is serving more than 11 million people and has helped America reach the lowest uninsured rate on record.”

Prior to the Justice Department’s decision last month to challenge Aetna’s acquisition of Humana, Bertolini was offering up suggestions on how to improve the risk pools. And the Obama administration last week said it was prepared to alter the so-called “risk adjustment.”

“We are encouraged by a recent announcement that the U.S. Department of Health and Human Services will explore new options to modify the risk adjustment program, and remain hopeful that we can work with policymakers from both parties on a sustainable public exchange model that meets the needs of the uninsured,” Bertolini said.

“We are committed to a health care marketplace that gives every American the opportunity to access affordable, high-quality care,” Bertolini added. “We will continue to evaluate our participation in individual public exchanges while gaining additional insight from the counties where we will maintain our presence, and may expand our footprint in the future should there be meaningful exchange-related policy improvements.”