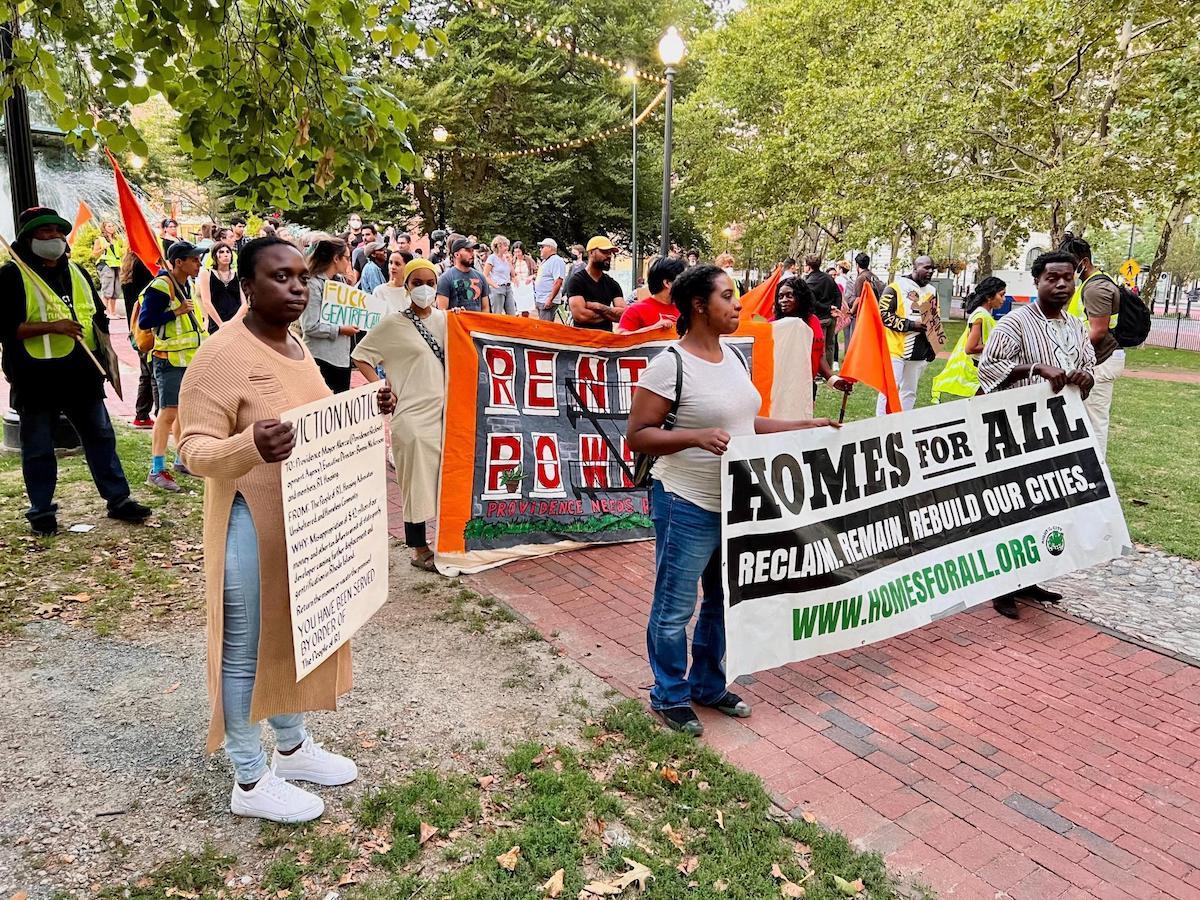 Above Photo: Protesters line up to march from Burnside Park to the Providence city hall and the Superman building. Liberation Photo.

Providence, Rhode Island – Around 90 people gathered in Burnside Park in Providence, Rhode Island on Sept. 1 to protest a development plan for so-called “affordable” housing. The plan would give millions in government subsidies and tax breaks to a private real estate developer to convert The Industrial National Bank Building into luxury apartments.

Like the rest of the country, Rhode Island is in the midst of a statewide housing crisis where truly affordable housing is almost impossible to find, and evictions and rent hikes run rampant. Protesters called on the government to fund public, affordable homes while protesting the gross misuse of a building which could house hundreds of families.

The rally was called by DARE — Direct Action For Rights And Equality. Terri Wright, an organizer with DARE’s Tenant and Homeowner Association, told the crowd that “A lot of this plan is about luring rich people in, and pushing poor people out of the city.” She added, “They take our money when we come down here and shop, they take our dollars — but we can’t afford to live down here.”

‘Affordable’ housing for whom?

The Industrial National Bank Building, colloquially known as the Superman Building, stands at the heart of downtown Providence and is the tallest building in Rhode Island. The 26-floor building was constructed in 1928 by the Industrial Trust Company, and was occupied by banks until 2013. It is currently owned by a Massachusetts based real estate company, High Rock Development LLC.

Since 2013 the building has remained vacant, while the owner of High Rock has requested public funds to redevelop it. In April of this year the Rhode Island state government announced a $220 million dollar redevelopment plan to convert the Superman Building into 285 residential apartments. The redevelopment plan includes $41 million in state and city funding and tax credits, and a 30-year tax treaty — the terms of which have not yet been made public.

According to that proposal, 228 of those apartments will be market rate apartments, and only 57 units will be affordable housing. But calling these units “affordable” is a misnomer, since they require 80 to 120% of the area’s median income for anyone to afford them. With more and more wealthy people moving into Providence, 80% AMI amounts to $54,150 for a household of one. Only fourteen units — including studios and one- and two-bedroom apartments — are marked for that price point. The rest are more expensive.

Christian Torre of the Party for Socialism and Liberation spoke about the inhumanity and irrationality of a system where the building, which could have housed hundreds of people, was kept empty during a homelessness crisis because profit could not be made. “Before the pandemic started,” Torre said, “Rhode Island was already in a housing crisis, with the highest eviction rate in New England. Since the pandemic, the crisis has only gotten worse.”

Torre branded the current plan as government-aided hoarding and price gouging. “They’re pricing us out of our city, and they’re spending our tax dollars to do it! We won’t let that happen. Poor and working people have a right to a home! It is our sweat, our labor and our work that run this city, not the politicians, not the developers, and certainly not High Rock!”

“If the state wants to ‘breathe life back into this city,’ those tax credits need to be put back into infrastructure and to house those that need it,” Kendra, a member of the THA, said. “We need housing not for the minority, but the majority of our community.”

In addition to opposing the redevelopment plan, organizers voiced general demands to ensure at least 33% of units in any new housing development be reserved for low-income housing and called for city-wide rent stabilization.

Olivia, an organizer with the Tenant Network, stressed the need to form tenant unions, saying that “market based approaches that prioritize profit over human lives have absolutely failed us.”

Barbara Fleury of the George Wiley Center told Liberation News that she came to the protest because the plan is “an incorrect allocation for luxury housing in the name of affordable housing.”

Anna, who heard about the event from a local reading group, attended the rally because “Housing is a right! It’s frustrating that using the name of affordable housing is being used for something else.”

Ryan, a member of a local socialist group, said, “capitalism does not consider housing as a human right.” Another protester, Kat, said, “big buildings are being turned into luxury housing. Who is this city actually working for?”

‘We need to out-organize them!‘

The rally was followed by a march which stopped first at Providence City Hall, where protesters served an eviction notice to those responsible for the deal: the Mayor, the Planning Director and Executive Director of the Providence Redevelopment Agency, and members of Rhode Island Housing. The crowd then marched to the Superman Building across the street, chanting, “Whose city? Our city! Whose building? Our building!”

With the slogan “Superman Won’t Save Us,” organizers spoke to the need for a movement to win real housing justice. “We need to learn how to help one another to stand up for one another,” said Brenda Taylor of the THA.

“We need to be organized,” Torre said. “The rich have the politicians, the real estate builders, the so-called foundations, the police. And they use them all in a highly organized manner to enrich and bail themselves out. But they don’t have the numbers. We, working people, have the numbers. And we need to out-organize them!”