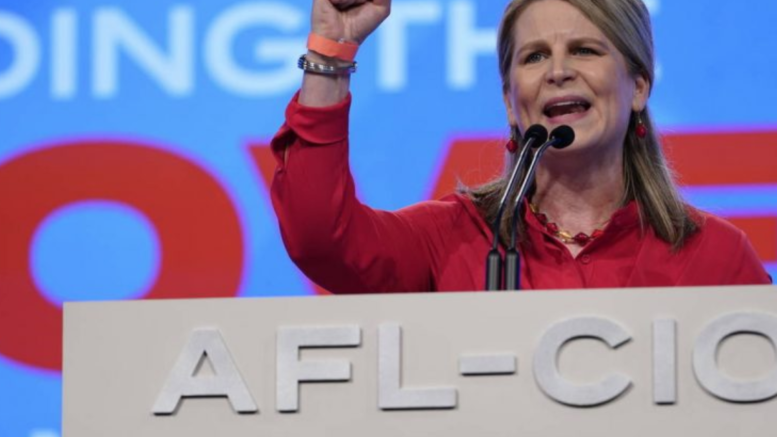 Greetings from Philly, where it’s been a busy day of interviewing and networking with people at the AFL-CIO Convention. We will have some stories coming out in the next couple of days, but in the meantime, here are a few things we saw on the convention floor.

Earlier today, many were unexpectedly locked out of the AFL-CIO convention after the Secret Service closed the doors for the arrival of President Joe Biden. The lockout infuriated activists and delegates who had arrived early to see Biden, but many also saw it as a metaphor for how people are being excluded from the convention as a whole.

Shockingly, the AFL-CIO did not invite the Amazon Labor Union, since it’s an independent union and doesn’t belong to the AFL-CIO. Nor did the convention invite members of the SEIU-affiliated Starbucks Workers United.

“It’s just petty,” one senior union official told Payday Report. “Starbucks and Amazon are two of the most exciting campaigns in recent memory, and we don’t even have anyone here from those campaigns to learn lessons from these campaigns.”

Debate on Democratizing the AFL-CIO is Blocked

Prior to the convention, the Vermont AFL-CIO submitted a motion that would allow for every member of the labor movement to vote on electing the leadership of the national AFL-CIO. Many unions, such as the Teamsters, the UAW, the Steelworkers, and NewsGuild allow their rank-and-file members to vote on leadership. In contrast, the leadership of the AFL-CIO is selected by a body of 500 delegates.

The Executive Council blocked the motion from being considered in an open debate. Instead, only motions that passed by unanimous votes were brought to the floor.

“If we’re going to have members willing to go the extra mile, we’re gonna have an engaged rank-and-file who’s willing to do what needs to be done. To build this kind of power, they need to feel ownership of the organization,” says Vermont AFL-CIO President David Van Dussen. “The Vermont AFL-CIO strongly believes that we need to not just talk about democracy as an external thing, but something that’s internal to unions. We can’t build the power we need unless we achieve that.”

However, the AFL-CIO did offer some criticism of itself. New AFL-CIO President Liz Shuler said the union would invest more resources into organizing,

pledging one million new members in the next decade.

“We have to firm up the structure and the financing. We want to concentrate our resources on organizing,” Shuler told a roundtable of reporters yesterday. “The federation’s muscle on organizing has not been as robust” as it should be.