ST. LOUIS – The AFL-CIO convention here passed yesterday a political resolution that calls for a break with “lesser of two evil politics” but came up short when it comes to projecting a clear path to how that will be accomplished.

“The time has passed when we can passively settle for the lesser of two evils,” reads the main political resolution passed Tuesday by the AFL-CIO convention delegates. Lee Saunders, chair of the AFL-CIO’s political committee and president of AFSCME, and Randi Weingarten, president of the American Federation of Teachers, introduced the resolution. They lead the labor federation’s two largest unions. Convention managers yoked the resolution to another measure it also approved discussing a labor party, though not by name.

The two measures, adopted October 24, followed a late Monday-evening meeting of supporters of reviving the Labor Party idea. It attracted about 50 delegates to an upstairs meeting room at the convention’s lead hotel. Their contention: Both the Democrats and the Republicans are under corporate domination.

The prime mover of a Labor Party motion at the convention, Postal Workers President Mark Dimondstein, has been calling for such a new formation since the passage of NAFTA in 1993, which he said showed both Democrats and Republicans were in the pockets of the corporate class.

Dimondstein made many of the same arguments for a Labor Party on the convention floor that he voiced in the meeting the night before, when Baldemar Velasquez of the Farm Labor Organizing Committee, Mark Dudzic of Labor’s Committee for Single Payer, and Donna DeWitt, former president of the South Carolina AFL-CIO, joined him.

Meeting participants differed over whether the nascent party should first build an organization and concentrate on issues, or get into political races, running the risk of becoming “spoilers” in the current political system, rigged in favor of the two existing parties.

“We had a vision to build a party of the working class. You have to have the labor movement at the table from the beginning,” of the effort, “or you’re building sand castles,” Dudzic explained. He was a leader in the original Labor Party effort of the late 1990s and early 2000s. Participants in the meeting agreed. “We cannot build a party of labor when the working class is in retreat,” he added. The question was how to move forward.

“We have to crawl before we walk, we have to walk before we run and we have to run before we sprint,” one attendee, Professional and Technical Engineers President Greg Junemann, said.

Velasquez contended pro-Labor Party members should participate in electoral politics, but starting at the local and state levels. But all agreed, as he put it, the Democrats “are not doing us any favors, never have and never will.”

Several unions meanwhile drew delegates to another meeting off the main convention floor – a meeting of Labor for Our Revolution. Seven national unions called on their member delegates to attend that meeting Monday, across the street from the convention hall to, in their words, continue the movement that grew out of the Sanders challenge in last year’s Democratic primaries.

The unions that called that meeting were the Amalgamated Transit Union, the American Postal Workers Union, the Brotherhood of Maintenance Way Employees, the Communications Workers of America, the International Longshore and Warehouse Union, National Nurses United, and the United Electrical Workers. They were joined by the Massachusetts and South Carolina AFL-CIOs.

The Our Revolution organization they are backing claims more than 300 local chapters in the US and four state-wide chapters in Texas, Massachusetts, Wisconsin, and Maryland.

Communications Workers of America previous president Larry Cohen is the chair of Our Revolution and has been asking union leaders to become part of the local groups.

Rand Wilson, a leader in SEIU’s Local 888, is a steering committee member for Labor for Our Revolution. He explained at the group’s meeting here that unions getting involved in Our Revolution gives labor the ability to influence it so it has significant focus on the working class. “It also gives us the opportunity to organize our own members around broad, working class issues,” he said.

The group is pushing a number of bills in Congress including Medicare for All and Free College tuition.

The AFL-CIO is not actually pulling the plug on the Democrats, although their politics resolution, which doesn’t mention the party by name, is a clear warning to Democrats that labor support will not be taken for granted.  The labor leaders who introduced the independent politics resolution, Saunders and Weingarten, are both members of the Democratic National Committee.  The main resolution declared that for the 2018 elections labor would “define a pro-worker agenda…to hold as a joint standard for all officials, regardless of party.”

That resolution also commits the federation to establish a communications framework to send the agenda to unions and their allies, “prioritize year-round member-to-member communication” and greater internal organizing, mobilizing non-union workers and opposing suppression of union, young, old, female and minority-group voters. 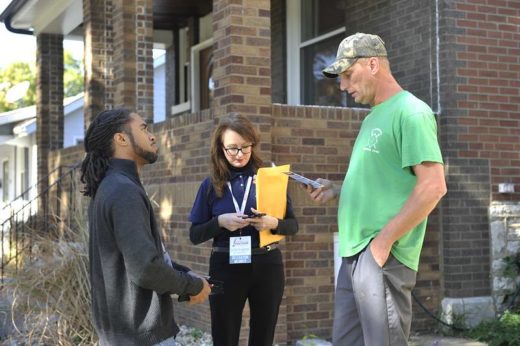 AFL-CIO convention delegates went out into St. Louis neighborhoods to door-knock for a Right to Work education campaign. | AFL-CIO

The Labor Party supporters at the convention made the argument that the massive grassroots mobilization for the Democratic presidential primary candidacy of Sen. Bernie Sanders, Ind-Vt., and the later GOP triumph of Donald Trump – powered in part by defecting working class voters in key Great Lakes states – “showed the working class is done with the status quo.” Dimondstein made that point in both the upstairs session and on the convention floor. Sanders drew tens of thousands of union volunteers and many more union voters.

“We can’t take half a loaf, a quarter of a loaf, an eighth of a loaf, or even crumbs,” Dimondstein added.

He received applause when he pointed out on the convention floor that even when the Democrats gained total control of the presidency and Congress, in the 2008 election, they not only didn’t follow through on labor law reform and other top progressive and worker priorities, but instead produced the Trans-Pacific Partnership “free trade” pact and similar measures. “The Democratic Party was not delivering anything,” he said, “even when it had control of the White House, the Congress and the Senate.”

Constructing a Labor Party, Dimondstein admitted, will be a long-range project and needs both community and labor support. “What would be wrong would be to confine this movement” for a Labor Party “to the institution of the two-party system.”

“Continuing to follow the same model, expecting a different result, is not a solution,” a delegate from Vermont said in the meeting.