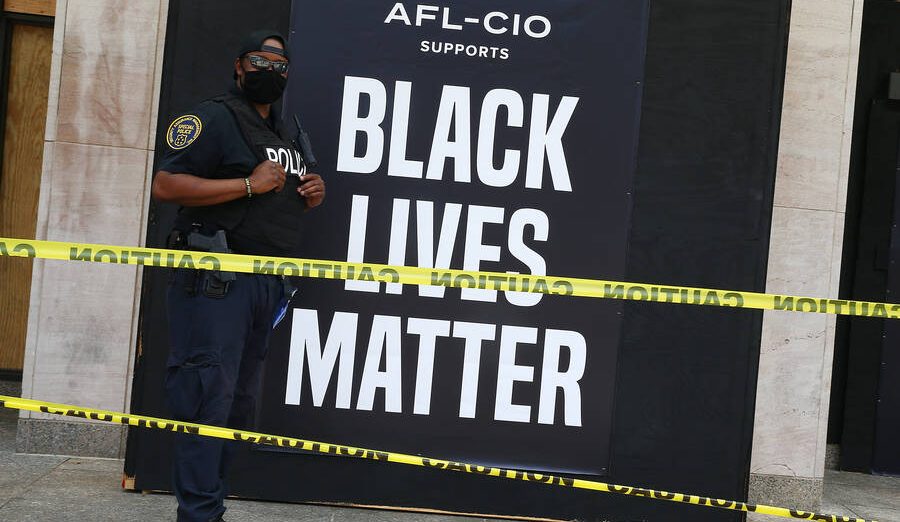 The long-awaited draft report is an explicit rejection of calls for the labor movement to separate itself from police.

On July 2020, a month after protests over racial injustice and police violence set the AFL-CIO headquarters on fire, America’s largest union coalition formed a ​“Task Force on Racial Justice” as a signal that it was taking the issues seriously. A subcommittee of that task force was charged with producing a report on the touchy issue of the labor movement’s relationship to police unions. In These Times has obtained a copy of that committee’s draft report, which is currently circulating within the group before being released to the public. As it stands, the report amounts to a definitive rejection of calls for the labor movement to separate itself from police unions, and a clear statement that the AFL-CIO intends to stay closely aligned with its police members.

The subcommittee on policing that produced the report is being led by United Steelworkers vice president Fred Redmond and by Liz Shuler, the AFL-CIO’s second-in-command, who is widely seen as a possible successor to current AFL-CIO president Richard Trumka. The committee is made up of representatives from 13 unions that have police members, along with the Teamsters and SEIU — neither of which are in the AFL-CIO, but were invited to participate. Among those included is the International Union of Police Associations (IUPA), the only all-police union in the AFL-CIO. The makeup of the committee therefore lends the imprimatur of the AFL-CIO’s top leadership to a group made up exclusively of those already obligated to represent police.

Since the murder of George Floyd by Minneapolis police officer Derek Chauvin in May of 2020 and the subsequent wave of Black Lives Matter protests, the left wing of the labor movement has made calls for the AFL-CIO to kick out police unions altogether. Last June, the Writers Guild of America East, an AFL-CIO member union, called on the federation to disaffiliate from IUPA. [Disclosure: I am on the council of the WGAE and voted in favor of that resolution.] A number of local branches of various unions passed similar resolutions, and the Seattle police union was kicked out of the county’s central labor council in June 2020. Mary Kay Henry, the head of SEIU, vowed that the expulsion of police unions from the labor movement would have ​“to be considered” if those unions didn’t change.

Yet the top leadership of the AFL-CIO stood behind police unions’ place in organized labor, even in the face of harsh criticism from IUPA itself — the head of the police union called Trumka ​“disgraceful.” Last June, as the clamor over the issue reached its peak, Liz Shuler suggested that rather than kicking out police unions, the AFL-CIO should have them adopt ​“codes of excellence” to change police behavior from within.

And that is exactly what the draft of the long-awaited AFL-CIO report on policing says. The 13-page draft report, titled ​“The Labor Movement’s Public Safety Blueprint for Change,” is not final and presumably could still change before being made public. But it is the product of many months of work, and is currently being considered inside the subcommittee. The draft report’s introduction makes clear that it is written from the perspective of police unions themselves: ​“Union public safety professionals, and our unions, have a duty to call out the wrong doers and actions that damage people in these communities and, in doing so, the integrity of our profession. We can no longer stand idly by when those who fail to uphold their oath and duty take actions that stain the work of law enforcement,” it says. ​“We must also advocate to protect the right of all working people to have a voice on the job and bargain collectively with their employer.” (The insistence on protecting collective bargaining for police is not an idle issue — days ago in San Antonio, voters narrowly rejected a ballot proposition that would have rescinded that police department’s collective bargaining rights.)

The draft report lays out a series of recommendations for police unions and police departments. The cornerstone of these is the ​“Union Law Enforcement Accountability and Duty Standards (U‑LEADS) Program,” a program ​“developed, owned and instituted” by police unions ​“to train local unions to have the ability to weed out wrongdoers from union membership.” Thus, Shuler’s suggestion of ​“codes of excellence” inside police unions would form the backbone of the AFL-CIO’s response to the past year of protests against the police.

The draft report does not describe the substance of the U‑LEADS training program in detail. But it does seek to distance police unions from the actions of bad police officers. ​“Police unions have little or no control over the hiring process, and we do not possess the ability to choose who will be given a badge and the duty of protecting and serving,” it says. ​“It is the union’s responsibility through collective bargaining to ensure fair processes for our members and fair treatment from the employer. Decisions on pre-employment standards, background checks, training and hiring are made at the sole discretion of the employer and management designees.”

The draft report also serves as an explicit rejection by the AFL-CIO of the demand from racial justice advocates to defund the police. It calls for more, not less, investment in police and public safety.

“We hear the calls coming from communities across the United States to abolish or defund the police. And we hear demands for reforms and stronger accountability in the wake of unarmed people losing their lives in interactions with law enforcement. While we do not believe that defunding or abolishing the police is a solution, it is clear we must make changes in law enforcement to build a sense of mutual respect, trust and accountability,” it says. ​“The way to improve public safety systems and services actually requires greater investment. This is no different than many other ​‘basic’ government services, including education, water, sewer and roads.”

Other recommendations in the draft report include a ​“differential response model” of policing aimed at focusing police more on crime and not on work that would be better handled by EMTs or social workers; streamlined hiring processes and more professional development for police officers; better mental health services for police; more training for police, including in aspects of community policing, implicit bias, and de-escalation; incentivizing higher education for police; and paying police more.

One noticeable omission in the draft report is the word ​“racism.” Despite coming out of the AFL-CIO’s Task Force on Racial Justice, the subcommittee’s draft report consistently portrays police as functionaries in a system that must be improved, rather than as part of the problem. The draft report calls for ​“understanding cultural impacts, as well as implicit, conscious and unconscious biases,” for diversity in police hiring, and for a variety of training programs in ​“topics such as implicit bias, fair and impartial policing, cultural competency, and other areas that help build trust and legitimacy in diverse communities.” But nowhere does the report grapple directly with the possibility that police officers or their unions might be responsible for any racial oppression. Indeed, even its language acknowledging the unpopularity of police unions portrays those unions as helpless victims: ​“The labor movement recognizes that the lack of mechanisms for local unions to hold wrongdoers accountable and protect the profession has contributed to the public’s poor view of police unions and tarnished the reputation of the profession.”

When asked about the AFL-CIO’s efforts on police reform, the coalition’s communications director Tim Schlittner said there was not an exact timeline for release of the report, but that the subcommittee was ​“far along” in its work. Schlittner would not respond to a list of specific questions about the draft report, or make Shuler available for an interview, saying ​“We are not going to comment on a leaked document that is still in draft form.”

If the AFL-CIO does release the draft report in something close to its current form, it will be the clearest statement yet that the labor federation sees police unions as an important part of the labor movement, and that the most powerful union coalition in America believes that the labor movement is responsible for protecting the interests of police union members. Last July, Richard Trumka said that ​“The labor movement is committed to being the tip of the spear in the fight to bring long overdue racial justice to our country.” As a test of that commitment, the draft report is an ominous sign.

Hamilton Nolan is a labor reporter for In These Times. He has spent the past decade writing about labor and politics for Gawker, Splinter, The Guardian, and elsewhere. You can reach him at Hamilton@​InTheseTimes.​com.