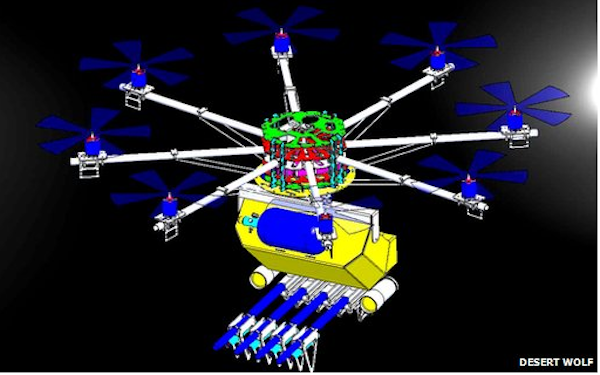 The maker of a drone that fires pepper spray bullets says it has received its first order for the machine.

South Africa-based Desert Wolf told the BBC it had secured the sale of 25 units to a mining company after showing off the tech at a trade show.

It is marketing the device as a “riot control copter” that can tackle crowds “without endangering the lives of security staff”.

But the International Trade Union Confederation is horrified by the idea.

“This is a deeply disturbing and repugnant development and we are convinced that any reasonable government will move quickly to stop the deployment of advanced battlefield technology on workers or indeed the public involved in legitimate protests and demonstrations,” said spokesman Tim Noonan.

He added that the ITUC would now try to identify which company had ordered the drones. 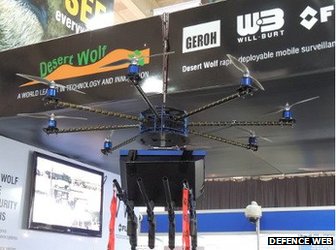 “We will be taking this up as a matter of urgency with the unions in the mining sector globally,” he added.

Desert Wolf’s website states that its Skunk octacopter drone is fitted with four high-capacity paintball barrels, each capable of firing up to 20 bullets per second.

In addition to pepper-spray ammunition, the firm says it can also be armed with dye-marker balls and solid plastic balls.

The machine can carry up to 4,000 bullets at a time as well as “blinding lasers” and on-board speakers that can communicate warnings to a crowd.

Although the firm’s site only features a graphic showing the machine’s design, the Defence Web news site has published a photo of the drone after it was unveiled at a security trade show near Johannesburg in May.

“We cannot disclose the customer, but I am allowed to say it will be used by an international mining house.

“We are also busy with a number of other customers who want to finalise their orders.

Mr Kieser said that he now planned to invite potential clients to see demonstration flights that would be held in Africa, Europe and the Americas over the coming months.

“We designed and developed the Skunk because of a huge safety risk that had to be addressed,” he added.

“We cannot afford another Lonmin Marikana and by removing the police on foot, using non-lethal technology, I believe that everyone will be much safer.”

Lonmin Marikana is a reference to a violent strike over pay in 2012 that resulted in 44 deaths at a South African platinum mine. Most of the deceased were workers, but local police were also among the casualties.

Mr Kieser noted that Lonmin was not the customer in question.

Guy Martin, the editor of Defence Web, said he believed the drone was unique.

“The Skunk unmanned aerial vehicle with its four paintball guns, loudhailer and cameras is only a logical next step in the development of UAVs, but nevertheless it is a watershed moment in their evolution and goes to show that UAVs have almost unlimited uses,” he said.

“I predict that we will see a whole new wave of UAVs emerging with payloads more unusual than tasers, dart guns and paintball guns.”

A Texas-based firm has developed a drone fitted with a stun gun, but it is not for sale

But Noel Sharkey, chair of the International Committee for Robot Arms Control campaign group, is concerned that the deployment of such drones risks “creeping authoritarianism and the suppression of protest”.

“Firing plastic balls or bullets from the air will maim and kill,” he said.

“Using pepper spray against a crowd of protesters is a form of torture and should not be allowed.

“We urgently need an investigation by the international community before these drones are used.”