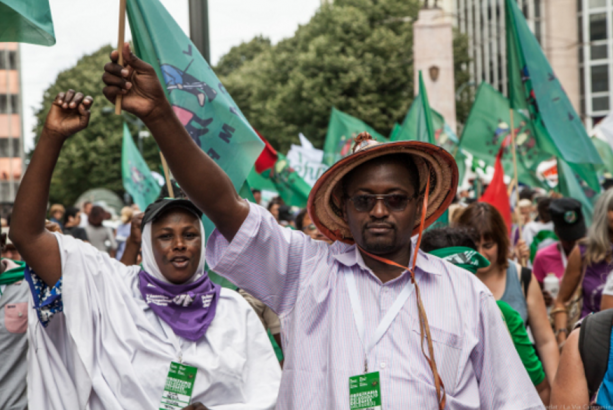 Above Photo: Photo from viacampesina.org

(Derio, Basque Country) Peasants across Africa are intensifying their struggles against land grabs and other harmful policies that promote industrial agriculture. At a recent international conference organized by the world’s largest peasants movement, Via Campesina, African peasants had opportunities to share their experiences of struggle and to learn.

“It is amazing to see how linked our struggles are”. With a countenance showing enthusiasm and eagerness, Nicolette Cupido could not conceal her emotions. There are two main reasons for her excitement. It was the first time she attended a global conference of peasants’ movements starting July 16 in Derio, in the outskirts of Bilbao, Basque Country. Her movement, the Agrarian Reform for Food Sovereignty Campaign (FSC), South Africa, was among the new organizations accepted into membership of Via Campesina.

A community organizer and a member of the FSC, Nicolette engages in food production at home and community gardens in Moorreesburg, a village in Western Cape, 120Km away from Cape Town.

She grows a variety of vegetables, that is the way she contributes in building food sovereignty. “I plant tomato, unions, beetroot, cabbage and carrots. The struggle for food sovereignty has to be practical, too”, she said.

Like Nicolette, about 20 other African peasants representing movements from Mozambique, Zimbabwe, Niger, Mali, Senegal and Ghana attended the conference.

This conference happens at a time when Africa is undergoing a harsh moment, as indicated by Ibrahima Coulibaly from the National Coordination of Peasant Organizations (CNOP) in Mali. Almost everywhere in Africa the elite and corporations are undertaking efforts to capture and control people’s basic means of production, such as land, mineral resources, seeds and water. These resources are increasingly being privatized due to the myriad of investment agreements and policies driven by new institutional approaches, imposed on the continent by western powers and Bretton Woods institutions.

“Democracy is under attack. Repression of protests and murder of political leaders is escalating, but we have to continue to build alternatives”, said Coulibaly.

Elizabeth Mpofu, from the Zimbabwe Smallholder Farmers Forum, is a small-scale farmer who had access to land after she took part in the radical land occupation that resulted in the fasttrack land reform in the early 2000s. According to her, building alternatives is to take direct action.

“I was a landless woman. Through our courage and determination we stood up and took action. Now I have land and I do agroecology farming”, she said.

Relations between the state, corporate power and the peasantry have always been exploitative. This characterizes the agrarian question in Africa. As some academics have argued, these relations have been coercive.

The perception that Africa is  a vast  “underutilized” area and, therefore, available  for large-scale agricultural investment, continues even today particularly among some western governments and foreign investors.

The African peasantry has, however, always resisted capital penetration in the countryside. “Africa has taught us many centuries of struggle and resistance”, remarked Eberto Diaz, a peasant leader from Colombia during the opening session of the 7th Conference of La Via Campesina. Elizabeth Mpofu shares the belief: “I think that our historical and present struggle experiences in Africa could inspire comrades from other countries”.

Domingos Buramo, from the Mozambique Peasants Union (UNAC), brought to the conference the experience of the Mozambican peasants and other civil society organizations against land grabbing and large-scale investment projects in Mozambique. He mentioned that the resistance to ProSavana, a large-scale agricultural project proposed for Mozambique, is an example of how transformative articulated struggles could be. “Now the government is changing its vision as a result of our work. We can change our societies”, he said.

In South Africa, landless black people are engaging in various forms of protest to access to land, water and development resources. “We do various social actions such as protest marches, pickets, sit-ins and even land occupations”, said Tieho Mofokeng, from the Landless Peoples Movement in Free State, South Africa.

Africa – including the Maghreb region – was the last continent to be part of Via Campesina. Since 2004 the number of African peasant movements joining La Via Campesina has been increasing. African movements consider their membership to the peasant movement as a strategic process of amplifying their struggles and reinforcing internationalism.

Via Campesina International Conference is the highest and most significant decision-making space of the movement.