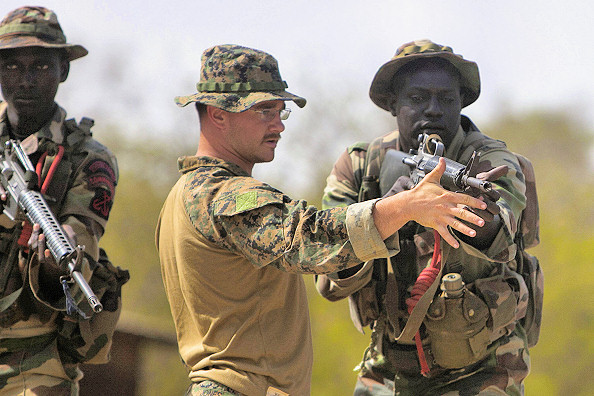 AFRICOM: Ready To Sabotage The Revolution

The U.S. Military Command in Africa, AFRICOM, is the West’s standing army on the continent, guardian of multinational corporations and the natural and human resources that keep the North America and Europe on top. AFRICOM claims its mission is “anti-terrorism” – a catch-all, “convenient excuse for AFRICOM to interfere with legitimate efforts to achieve African self-determination.”

“These days imperialist business must be conducted with finesse, subtlety, calculated distortions and when necessary, blatant lies.”

“…AFRICOM must continue to work with national and international partners to disrupt these transnational [terrorist] threats and prevent the export of terror on the continent, in the region and ultimately to our homeland.”

It’s that type of rhetoric that may have led Colby College Professor Laura Seay to ask in a Washington Post column: “Is AFRICOM all that bad?”

Seay readily acknowledges Africans’ suspicions, noting: “The history of United States policy in Africa is largely its Cold War history, and for Africans in particular, memories of those engagements are not often happy ones. Whether propping up dictators in the name of containment or turning a blind eye to human rights abuses by anti-communist forces, the United States earned a reputation for meddling and causing problems for Africa and its people throughout the Cold War. For many observers, it is hard to see how AFRICOM could be anything other than simply the latest iteration of neo-imperialist engagement by yet another bunch of shady, secretive white men sporting khakis, polo shirts and crew cuts.”

But Seay goes on to say: “The world has changed, though, and the environment in which AFRICOM and other U.S. security engagement occurs in Africa is vastly different from the one America’s Cold Warriors imagined.” Seay reaches no conclusions about the virtues or vices of AFRICOM, acknowledging only that “it’s complicated.”

“AFRICOM was already present in northern Africa where it was able to coordinate “Operation Odyssey Dawn,” the first stages of NATO intervention in Libya.”

In one respect, Seay is correct in that conditions have changed. To succeed, imperialism has always had to coordinate a seamless global network of governments, capital, mass media, and military resources. Long gone, however, are the days when this complex of industrial, intelligence and military forces can arrogantly flaunt not only its hegemony, but also its agenda. These days imperialist business must be conducted with finesse, subtlety, calculated distortions and when necessary, blatant lies.

If asked, AFRICOM says it is motivated solely by an interest in defeating terrorism, stabilizing Africa’s governments and economies, and providing humanitarian assistance. It is not an entirely untruthful response because doing business in the midst of turmoil is never appealing to major corporations. But on a deeper, more fundamental level, the maintenance of a 21st century empire demands a quiet, unnoticed presence in select geopolitical regions, not to openly and notoriously exploit, but to simply have a presence there “just in case.”  Kwame Ture used to say his organization, the All-African People’s Revolutionary Party, was “ready for the revolution.”  AFRICOM now stands ready to try and stop it. As just one example, in 2011, because of a perceived threat to the U.S. Empire coming out of Libya, western powers were no doubt pleased that AFRICOM was already present in northern Africa where it was able to coordinate “Operation Odyssey Dawn,” the first stages of NATO intervention in Libya.

The purported reason for intervention was that endangered Libyan civilians required protection. However, earlier this year, Foreign Policy Journal reported that Hillary Clinton’s emails show that, in addition to the West’s lust for Libya’s oil, the actual reasons for NATO intervention in Libya included a plan by Muammar Gadhafi to establish a gold-backed African currency. Such a currency would create new possibilities for African economic independence from imperialism. This “threat” had to be eliminated, and the U.S. not only intervened in Libya but also supported insurgency against the Gadhafi government. The fact that many of these rebel forces were openly anti-black and committed to purging black people from Libya was apparently of no concern to the U.S. which supported these racists until they cornered Gadhafi and shoved a bayonet into his rectum. After hearing the news of Gadhafi’s demise, then-U.S. Secretary of State Hillary Clinton cackled and said: “We came, we saw, he died.”

“To succeed, imperialism has always had to coordinate a seamless global network of governments, capital, mass media, and military resources.”

Events like the destruction of the Gadhafi government demonstrate how fighting “terrorism” can be a convenient excuse for AFRICOM to interfere with legitimate efforts to achieve African self-determination. Those who understand this do not ask “Is AFRICOM all that bad?”  They instead take note of the great restlessness among Africa’s young, laborers, the poor, and the continent’s socialist movement. Because the reward for Gadhafi’s quest for an African currency was violent overthrow and death, AFRICOM has similar plans for others who achieve the capacity to strike damaging blows against Africa’s current neo-colonial reality.

AFRICOM must maintain a continuing presence in Africa “just in case.” For that reason, AFRICOM stands as a continuing threat to Africa’s revolution, and it really is as bad as we have all believed it to be.

Mark P. Fancher is an attorney who writes frequently about the U.S. military presence in Africa. He can be contacted at mfancher@comcast.net.