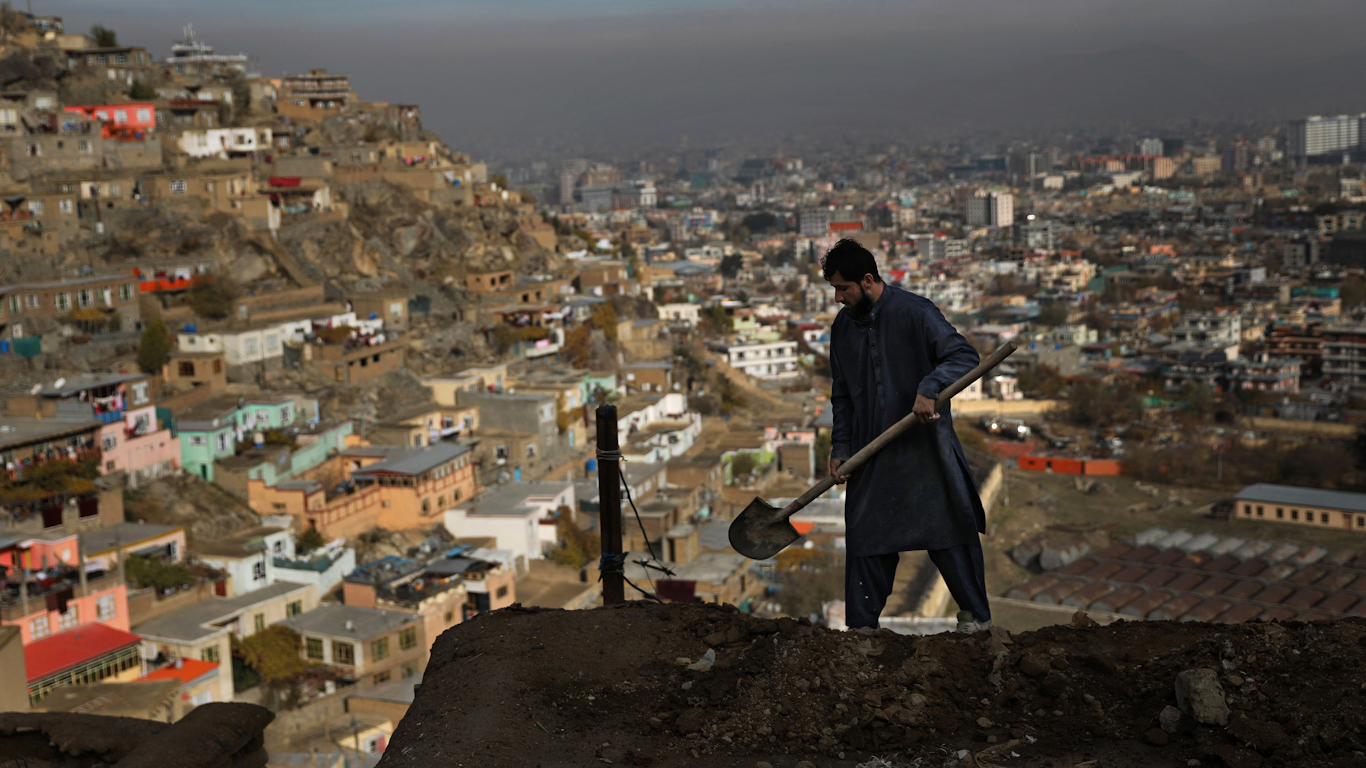 Above Photo: Feature photo | A man repairs the roof of a house on the hills surrounding Kabul, Afghanistan, Nov. 25, 2019. Altaf Qadri | AP

Since the 2001 occupation of Afghanistan began, fighting has not stopped, destroying the country and leading to the U.S. spending an estimated $2 trillion on the war.

American polling firm Gallup has found that Afghans are the saddest people on earth, finding that nearly nine in ten respondents are “suffering,” in their own words, with zero percent claiming that they are currently “thriving.” When asked to rate their life out of a score of ten, Afghans gave an average answer of 2.7, a record low for any country studied. Worse still, when asked to predict the quality of their life in five years, the average answer was even lower: 2.3.

As the study mentioned, “the unprecedented finding highlights Afghans’ near-universal lack of optimism.” In more than a decade of data collection around the world on the topic, this is the first time that any population predicted that their future lives would be worse than their current ones. This, to Gallup, was “all the more notable” due to Afghanistan’s very young population; two-thirds of those interviewed were aged 35 or under. Less than half of the country said they experienced enjoyment or were treated with respect in the previous day, while 52 percent admitted to worrying for much of the day, up 10 percentage points from 2016.

Remarkably, the study does not mention the 18-year U.S.-led invasion and occupation of the country as a potential explanatory factor for their suffering. In fact, it explicitly warns against an American withdrawal, arguing that it would “strengthen the Taliban’s grip” over the country, thus, tacitly endorsing the U.S. government and presenting the military as a force for good in the region.

The United States attacked Afghanistan in October 2001, invading just weeks after the September 11 attacks on New York City and Washington D.C. It justified the decision on the inaccurate claim that the Taliban were not willing to negotiate handing over top suspect Osama Bin Laden. Since 2001, the occupation and fighting have not stopped, destroying the country in the process and leading to the U.S. spending an estimated $2 trillion on the war. The U.S. military and its allies are the number one killers in the country. Despite this, the Taliban is now in a stronger position than at any time in the last two decades, controlling more territory than it did in 2001.

The human cost of the conflict is clear but quantifiable statistics are sparse. The World Bank estimates that the number of Afghans living in poverty rose from 9.1 million in 2007 to 19.3 million in 2016. The average income is less than 2,000 U.S. Dollars per year, one of the lowest of any country in the world.

This is not the first time that Gallup has downplayed its explosive findings that imply a strongly anti-imperialist message. In 2014, it surveyed world public opinion on which country they believed was the greatest threat to world peace. The overwhelming number one choice was the United States, with a quarter of those polled selecting the U.S. out of nearly 200 countries.  Even in closely allied states like Germany, fear of America was highest. Pakistan was a distant second, buoyed by a large Indian vote in the survey. Gallup decided not to ask the question again. A December poll from the Pew Research Center also showed a majority of Mexicans consider the U.S. the greatest threat to their country.

In December, the Afghanistan Papers were leaked to the Washington Post. In what political commentator Kyle Kulinski described as the worst media failure of 2019, the documents revealed that high-level military officers believed that the war was unwinnable, but that knowledge was kept from the public by the government who deliberately misled the public since the invasion. Kulinski decried the near “total lack of coverage” of the news. “We were lied to all throughout the war, every step of the way” he said; “18 years we’ve been at war…no good has come from it.”

The debacle in Afghanistan is only one case in a fundamentally flawed U.S. policy with worldwide consequences. New quasi-governments installed by U.S. “regime change” in country after country have proven more corrupt, less legitimate and less able to control their nation’s territory than the ones the U.S. has destroyed.

She argued that there is a single premise that Washington “refuses to learn”: that the underlying fault is not in how the U.S. tries to change societies through regime change, but in the “fundamental illegitimacy of regime change itself.” While the Trump administration has made a few noises about a withdrawal from Afghanistan, successive regimes before it have made similar proclamations. And with the recent deployment of 4,000 extra troops to Iraq, it doesn’t appear that the Middle East will have anything to smile about any time soon.