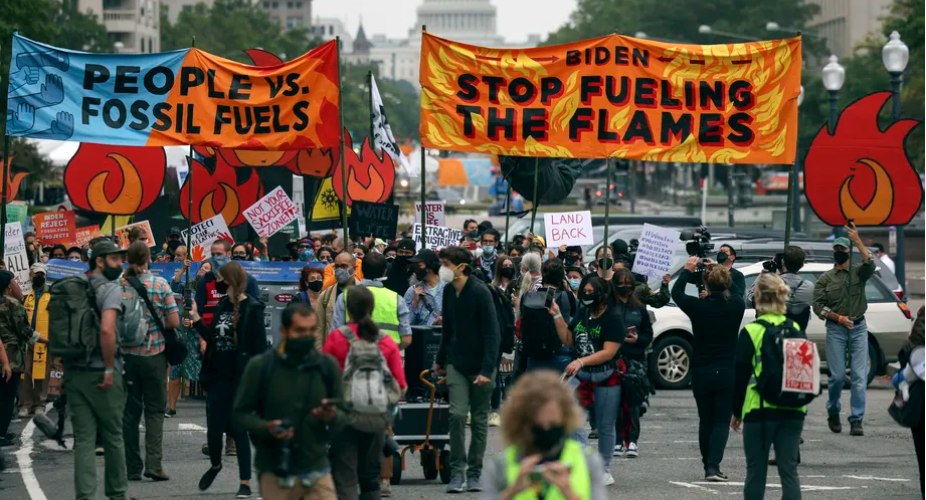 After A Year Of Biden, Why Do We Still Have Trump’s Foreign Policy?

Above photo: Climate protesters march to the White House on October 12, 2021 in Washington, DC. Photo by Kevin Dietsch/Getty Images.

President Biden and the Democrats were highly critical of President Trump’s foreign policy, so it was reasonable to expect that Biden would quickly remedy its worst impacts. As a senior member of the Obama administration, Biden surely needed no schooling on Obama’s diplomatic agreements with Cuba and Iran, both of which began to resolve long-standing foreign policy problems and provided models for the renewed emphasis on diplomacy that Biden was promising.

Tragically for America and the world, Biden has failed to restore Obama’s progressive initiatives, and has instead doubled down on many of Trump’s most dangerous and destabilizing policies. It is especially ironic and sad that a president who ran so stridently on being different from Trump has been so reluctant to reverse his regressive policies. Now the Democrats’ failure to deliver on their promises with respect to both domestic and foreign policy is undermining their prospects in November’s midterm election.

Here is our assessment of Biden’s handling of ten critical foreign policy issues:

1. Prolonging the agony of the people of Afghanistan. It is perhaps symptomatic of Biden’s foreign policy problems that the signal achievement of his first year in office was an initiative launched by Trump, to withdraw the United States from its 20-year war in Afghanistan. But Biden’s implementation of this policy was tainted by the same failure to understand Afghanistan that doomed and dogged at least three prior administrations and the U.S.’s hostile military occupation for 20 years, leading to the speedy restoration of the Taliban government and the televised chaos of the U.S. withdrawal.

Now, instead of helping the Afghan people recover from two decades of U.S.-inflicted destruction, Biden has seized $9.4 billion in Afghan foreign currency reserves, while the people of Afghanistan suffer through a desperate humanitarian crisis. It is hard to imagine how even Donald Trump could be more cruel or vindictive.

2. Provoking a crisis with Russia over Ukraine. Biden’s first year in office is ending with a dangerous escalation of tensions at the Russia/Ukraine border, a situation that threatens to devolve into a military conflict between the world’s two most heavily armed nuclear states–the United States and Russia. The United States bears much responsibility for this crisis by supporting the violent overthrow of the elected government of Ukraine in 2014, backing NATO expansion right up to Russia’s border, and arming and training Ukrainian forces.

Biden’s failure to acknowledge Russia’s legitimate security concerns has led to the present impasse, and Cold Warriors within his administration are threatening Russia instead of proposing concrete measures to de-escalate the situation.

After a decade of unprecedented U.S. military spending and aggressive military expansion under Bush II and Obama, the U.S. “pivot to Asia” militarily encircled China, forcing it to invest in more robust defense forces and advanced weapons. Trump, in turn, used China’s strengthened defenses as a pretext for further increases in U.S. military spending, launching a new arms race that has raised the existential risk of nuclear war to a new level.

Biden has only exacerbated these dangerous international tensions. Alongside the risk of war, his aggressive policies toward China have led to an ominous rise in hate crimes against Asian Americans, and created obstacles to much-needed cooperation with China to address climate change, the pandemic and other global problems.

4. Abandoning Obama’s nuclear agreement with Iran. After President Obama’s sanctions against Iran utterly failed to force it to halt its civilian nuclear program, he finally took a progressive, diplomatic approach, which led to the JCPOA nuclear agreement in 2015. Iran scrupulously met all its obligations under the treaty, but Trump withdrew the United States from the JCPOA in 2018. Trump’s withdrawal was vigorously condemned by Democrats, including candidate Biden, and Senator Sanders promised to rejoin the JCPOA on his first day in office if he became president.

Instead of immediately rejoining an agreement that worked for all parties, the Biden administration thought it could pressure Iran to negotiate a “better deal.” Exasperated Iranians instead elected a more conservative government and Iran moved forward on enhancing its nuclear program.

A year later, and after eight rounds of shuttle diplomacy in Vienna, Biden has still not rejoined the agreement. Ending his first year in the White House with the threat of another Middle East war is enough to give Biden an “F” in diplomacy.

5. Backing Big Pharma over a People’s Vaccine. Biden took office as the first Covid vaccines were being approved and rolled out across the United States and the world. Severe inequities in global vaccine distribution between rich and poor countries were immediately apparent and became known as “vaccine apartheid.”

Instead of manufacturing and distributing vaccines on a non-profit basis to tackle the pandemic as the global public health crisis that it is, the United States and other Western countries chose to maintain the neoliberal regime of patents and corporate monopolies on vaccine manufacture and distribution. The failure to open up the manufacture and distribution of vaccines to poorer countries gave the Covid virus free rein to spread and mutate, leading to new global waves of infection and death from the Delta and Omicron variants.

Biden belatedly agreed to support a patent waiver for Covid vaccines under World Trade Organization (WTO) rules, but with no real plan for a “People’s Vaccine,” Biden’s concession has made no impact on millions of preventable deaths.

6. Ensuring catastrophic global warming at COP26 in Glasgow. After Trump stubbornly ignored the climate crisis for four years, environmentalists were encouraged when Biden used his first days in office to rejoin the Paris climate accord and cancel the Keystone XL Pipeline.

But by the time Biden got to Glasgow, he had let the centerpiece of his own climate plan, the Clean Energy Performance Program (CEPP), be stripped out of the Build Back Better bill in Congress at the behest of fossil-fuel industry sock-puppet Joe Manchin, turning the U.S. pledge of a 50% cut from 2005 emissions by 2030 into an empty promise.

Biden’s speech in Glasgow highlighted China and Russia’s failures, neglecting to mention that the United States has higher emissions per capita than either of them. Even as COP26 was taking place, the Biden administration infuriated activists by putting oil and gas leases up for auction for 730,000 acres of the American West and 80 million acres in the Gulf of Mexico. At the one-year mark, Biden has talked the talk, but when it comes to confronting Big Oil, he is not walking the walk, and the whole world is paying the price.

7. Political prosecutions of Julian Assange, Daniel Hale and Guantanamo torture victims. Under President Biden, the United States remains a country where the systematic killing of civilians and other war crimes go unpunished, while whistleblowers who muster the courage to expose these horrific crimes to the public are prosecuted and jailed as political prisoners.

Twenty years after it set up an illegal concentration camp at Guantanamo Bay, Cuba, to imprison 779 mostly innocent people kidnapped around the world, 39 prisoners remain there in illegal, extrajudicial detention. Despite promises to close this sordid chapter of U.S. history, the prison is still functioning and Biden is allowing the Pentagon to actually build a new, closed courtroom at Guantanamo to more easily keep the workings of this gulag hidden from public scrutiny.

8. Economic siege warfare against the people of Cuba, Venezuela and other countries. Trump unilaterally rolled back Obama’s reforms on Cuba and recognized unelected Juan Guaidó as the “president” of Venezuela, as the United States tightened the screws on its economy with “maximum pressure” sanctions.

Juan Guaidó is now the least popular opposition figure in Venezuela, and genuine grassroots movements opposed to U.S. intervention are bringing popular democratic and socialist governments to power across Latin America, in Bolivia, Peru, Chile, Honduras – and maybe Brazil in 2022.

9. Still supporting Saudi Arabia’s war in Yemen and its repressive ruler. Under Trump, Democrats and a minority of Republicans in Congress gradually built a bipartisan majority that voted to withdraw from the Saudi-led coalition attacking Yemen and stop sending arms to Saudi Arabia. Trump vetoed their efforts, but the Democratic election victory in 2020 should have led to an end to the war and humanitarian crisis in Yemen.

Instead, Biden only issued an order to stop selling “offensive” weapons to Saudi Arabia, without clearly defining that term, and went on to okay a $650 billion weapons sale. The United States still supports the Saudi war, even as the resulting humanitarian crisis kills thousands of Yemeni children. And despite Biden’s pledge to treat the Saudis’ cruel leader, MBS, as a pariah, Biden refused to even sanction MBS for his barbaric murder of Washington Post journalist Jamal Khashoggi.

Donald Trump was flagrant in his disdain for Palestinian rights, including tranferring the U.S. Embassy from Tel Aviv to a property in Jerusalem that is only partly within Israel’s internationally recognized border, a move that infuriated Palestinians and drew international condemnation.

But nothing has changed under Biden. The U.S. position on Israel and Palestine is as illegitimate and contradictory as ever, and the U.S. Embassy to Israel remains on illegally occupied land. In May, Biden supported the latest Israeli assault on Gaza, which killed 256 Palestinians, half of them civilians, including 66 children.

Each part of this foreign policy fiasco costs human lives and creates regional–even global–instability. In every case, progressive alternative policies are readily available. The only thing lacking is political will and independence from corrupt vested interests.

The United States has squandered unprecedented wealth, global goodwill and a historic position of international leadership to pursue unattainable imperial ambitions, using military force and other forms of violence and coercion in flagrant violation of the UN Charter and international law.

Candidate Biden promised to restore America’s position of global leadership, but has instead doubled down on the policies through which the United States lost that position in the first place, under a succession of Republican and Democratic administrations. Trump was only the latest iteration in America’s race to the bottom.

Biden has wasted a vital year doubling down on Trump’s failed policies. In the coming year, we hope that the public will remind Biden of its deep-seated aversion to war and that he will respond—albeit reluctantly—by adopting more dovish and rational ways.

Nicolas J. S. Davies is an independent journalist, a researcher with CODEPINK and the author of Blood on Our Hands: The American Invasion and Destruction of Iraq.