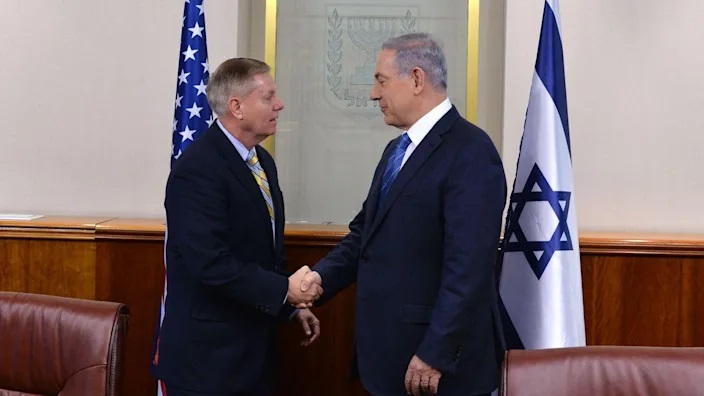 After Gaza Slaughter, Israel Wants Another $1 Billion Out of the US

Above Photo: From Yahoo News.

After an 11-day bombing campaign in Gaza that killed at least 256 Palestinians, including 67 children, Israel has its hand out to its greatest ally for an additional $1 billion in “emergency” military aid, on top of the $3.8 billion Washington provides each year.

Sen. Lindsey Graham (R-SC) confirmed that Israel will make the request a day after he met with Israeli Prime Minister Benjamin Netanyahu in Jerusalem. “There is going to be a request made by the Israelis to the Pentagon on Thursday for $1 billion in aid to replenish Iron Dome batteries,” Graham told Fox and Friends on Tuesday.

The Iron Dome is one of Israel’s US-funded missile defense systems. After Israel and Hamas agreed to an Egyptian-brokered ceasefire, President Biden promised that he would “replenish” the Iron Dome, a sign that getting the $1 billion out of Washington will not be very hard for the Israelis.

The fact that the Iron Dome needs replenishing could be the reason why Netanyahu agreed to the ceasefire with Hamas after 11 days. Israel rejected an earlier ceasefire proposal from Hamas that was offered only two days after the bombing started in Gaza. The initial truce offer received very little coverage in Western media.

Throughout the 11-day slaughter, the US refused to condemn the Israeli killing of Palestinian children and gave the Israelis political cover by blocking UN Security Council statements calling for a ceasefire. In a pathetic attempt to pretend that the Biden administration cares about the suffering Israel is causing, Secretary of State Antony Blinken announced additional aid for the Palestinians after the truce was reached. The assistance includes about $5.5 million to rebuild Gaza, a pittance compared to what the US is poised to give Israel.

In an interview with Israel’s Channel 12, Blinken somehow claimed that Israel took “significant steps” to avoid killing civilians in Gaza. This ignores the deliberate targeting of civilian homes. In one Israeli air raid, bombs hit a residential building in the al-Shati refugee camp in Gaza, killing 10 people; two women and eight children.

Besides killing over 250 Palestinians, the bombing campaign wounded 2,000, about 600 of which were children, and destroyed critical civilian infrastructure. The violence was not limited to Gaza. In the West Bank and East Jerusalem, at least 29 Palestinians were gunned down by Israeli security forces. In Israel, at least 12 people were killed by rockets fired out of Gaza, including two children.

As usual, throughout the slaughter, US officials made sure to repeatedly say that they support Israel’s “right to defend itself.” Israel’s bombing campaign started after rockets were fired out of Gaza in response to violence against Palestinians in East Jerusalem, particularly Israeli forces storming al-Aqsa mosque and wounding hundreds with tear gas and rubber bullets.

Because rocket fire from Gaza came before Israeli airstrikes, it’s easy for Western media to frame Israel’s response as “defensive.” But this ignores that the status quo — the Israeli blockade of Gaza and the military occupation of the West Bank and East Jerusalem — is an act of war against the Palestinians. While it doesn’t justify indiscriminate rocket fire, under international law, Palestinians have the right to defend themselves against their occupier.

But these details are lost — or purposely ignored — in Washington, and unfortunately, they are also lost with the majority of the American people. Although the tide does seem to be turning, as poll after poll shows more young Americans are becoming more critical of Israel — even young evangelical Christians.

In Congress, there is some opposition to unconditional US support for Israel. While it is only a handful of progressives, and most like Senator Bernie Sanders (D-VT) are quick to back down, the fact that US arms sales to Israel do not breeze right through Congress anymore is significant.

But as things stand with Joe Biden in the White House, an extra $1 billion in US taxpayer dollars for Israel will be viewed as just a drop in the bucket. In 2013, as vice president, Biden made it clear just how favorably he views Israel. “If there were not an Israel, we would have to invent one to make sure our interests were preserved,” he said. “America’s support for Israel’s security is unshakable, period. Period, period.”

Lindsey Graham said Tuesday that the additional $1 billion for Israel would be a “good investment for the American people.” But US support for Israel has only hurt the American people, creating enemies who would never have a beef with Washington if it wasn’t for US funding of the displacement, occupation, and slaughter of the Palestinians. With continued US military aid, it’s only a matter of time before another Israeli bombing campaign begins.