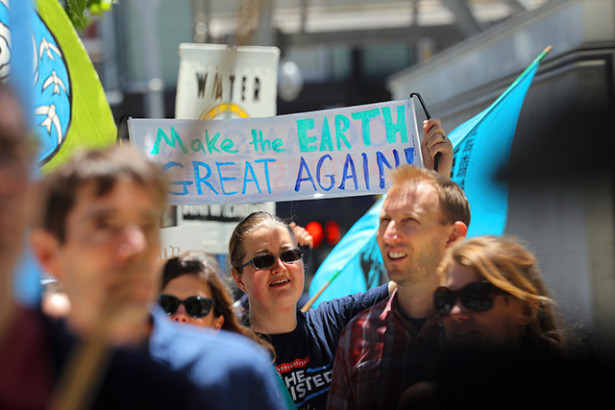 After Paris Pullout, Spread An Ethic Of Love And Cooperation

As we are barraged with constant bad news about climate science and climate politics at the national and global level, the US climate movement has really important opportunities to hold our ground and build momentum through local and state level actions. When Donald Trump announced last week that he was pulling the US out of the Paris climate agreements, 211 city mayors and 10 state governors immediately responded by committing to upholding their end of the bargain. The speed of that response is a testament to the critical value of the local climate organizing that has already been done across the country. This opening for political leadership adds to the many ways that the struggle against global climate change is fought on local turf.

The fight against fossil fuel infrastructure and extraction has always been centered on local organizing.

The fight against fossil fuel infrastructure and extraction has always been centered on local organizing. Countless communities have fought off power plants, pipelines, fracking, drilling, mining, export facilities and compressor stations. The combination of these fights has probably been the single biggest factor in the deceleration of carbon emissions over the past few years. Even where these campaigns have failed to stop a project, their fierce resistance helped send a signal to investors and politicians that there is strong opposition to fossil fuels. As front-line struggles like the Standing Rock resistance to the Dakota Access pipeline have demonstrated, these specific fights can also have impacts that resonate far beyond the climate movement. Now that we can virtually guarantee that the federal government will green-light any fossil fuel project for the foreseeable future, those projects will have to be stopped at the local level.

State and local communities have also been the testing ground for climate solutions. From community solar to carbon pricing, states and municipalities have experimented with the kinds of alternatives that will have to become standards for a sustainable energy economy. These small-scale efforts have shown what is possible if we create the political will at larger levels. Not only are these efforts achieving physical and policy gains, they are also often more enjoyable because the campaigns operate at a human scale that builds relationships and communities.

However, we should remain conscious of the larger picture even as we act on a local level. It can be tempting to allow ourselves to focus entirely on local issues as a means of escapism. The news of terrifying national politics and escalating global climate impacts can be despairing and overwhelming. I’ve been helping to build a community garden here in my neighborhood of Pawtucket, Rhode Island, and I’d much rather just do that than tackle seemingly impossible national challenges. I know how to push a wheelbarrow, but I frankly don’t know how to overthrow a fascist regime. Neither do any of the organizations in the climate movement, nearly all of which were designed for community organizing or lobbying.

We can’t turn away from the many communities that don’t have the luxury of escaping into their local concerns because their localities are directly and immediately under threat.

But the fact that we don’t know how to solve a problem does not mean that we can ignore it. When we use a local focus as escapism, we lose sight of the ways that our local organizing can build leverage for larger needs. And we can’t turn away from the many communities that don’t have the luxury of escaping into their local concerns because their localities are directly and immediately under threat from corporate exploitation or climate catastrophe. As Jonathan Smucker writes in his new book, Hegemony How-To: A Roadmap for Radicals, “It is selfish to jump ship when there are not enough lifeboats for everyone. We must conspire to take the helm.”

The necessity of taking the helm means that even when most of our work is on a local or state level, we need to constantly be looking for ways that our small-scale efforts can impact the crises at larger levels. This spring I took my first crack at authoring legislation and wrote a civil resistance resolution for Rhode Island. The bill, RI H5545, recognizes the illegitimacy of the Trump administration and encourages civil resistance by any public officials tasked with carrying out Trump’s immoral, unconstitutional and apocalyptic orders. It’s a stalled resolution in the smallest state in the country, but it strives toward the goal of legitimizing the moral agency that is increasingly necessary.

The emerging leadership of mayors and governors provides a new opportunity to leverage our local efforts. By stepping into the void of leadership left by Trump, some of those mayors and governors may be able to directly engage with international leaders. Those of us who have established some degree of access to those officials should be encouraging them to push Europe and China to place economic sanctions on US states that do not abide by the Paris agreements.

Even if we don’t know what to do to directly address the crises on those larger levels, it is still valuable to stay present to their reality. Earth Guardians and other youth-led climate organizations have launched an effort called Floods and Fires that involves a ritual of grieving for climate suffering. That kind of practice brings clarity to our thinking and reminds us of our connection to others beyond ourselves.

The biggest battleground now is the social realm in which there are no official channels of authority.

In a sort of mixed blessing, the biggest battleground now is the social realm in which there are no official channels of authority. This is the question of whether climate catastrophes turn us toward one another with love and cooperation or against one another with fear and violence. The goal of limiting climate change to 1.5°C was not reasonably possible at the time the Paris agreements were negotiated, and any remaining pathways to a 2°C limit defy political plausibility. While that level of disruption will likely collapse what we know as global industrial civilization, whether or not it destroys our humanity is determined by our social response. The public presence of Donald Trump is summoning the ugliest demons of our nature, but on this social battleground we can impact our communities just as powerfully as Trump. With all of our direct interactions in our local communities, we shape how our society will respond to the inevitable hardships that lie ahead. That work of spreading an ethic of love and cooperation has never been more urgent or critical, and it begins right outside our doors.