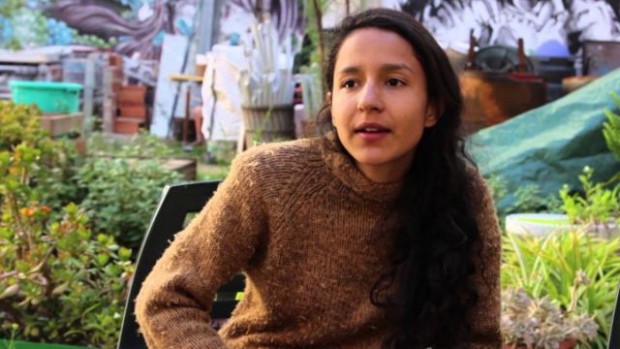 Centrist Democrats are bragging that they don’t need progressives to win in November. But the partnership works both ways.

It’s morally useful to look at American politics through the eyes of Laura Zuñiga Cáceres. Just before the Democratic National Convention in Philadelphia, the daughter of slain Honduran activist Berta Cáceres arrived in Philadelphia, where she stayed, spoke, and, with thousands of others, protested the convention.

For Cáceres, the political is personal: Hillary Clinton’s State Department acted at least passively in favor of the Honduran regime change that has been associated with the violence that killed her mother. Clinton herself has demonstrated an awkward and, to put it mildly, ignorantly privileged understanding of the forces that overthrew Manuel Zelaya and, in the end, cost Berta Cáceres her life.

Through a translator, Laura told me she believes that the U.S. bears responsibility for the “climate of repression that we feel on a daily basis in Honduras. The U.S. continues to support a government that has been incapable of dealing with the basic rights and needs of its people.”

Democratic National Committee apologists will ask what Honduras has to do with Philadelphia. Some will laugh and mock the assertion that Cáceres belonged in Philly at all. To those who don’t laugh or mock, her presence is an argument about the system that makes both Clinton and Trump possible. In the minds of many American progressives, the moral force and historical validity of that argument is part of a deep, fiery motivation in this hot pre-election summer of 2016: Honduras, fracking, climate change, racism, neoliberalism, capitalism, Trumpism.

Here is the problem: While millions will vote for Hillary Clinton in order to “stop” Donald Trump, Clintonism won’t defeat Trumpism. Given particular sets of assumptions, it’s completely rational to draw a line in the sand with Trump, and it’s equally rational to believe that’s not nearly enough, that it’s deceptive and oversimplifying, and that Trumpism is a symptom of the neoliberal disorder Clinton tries to put a happy face on. Over the past few months I’ve met many people fully aware of the second and doing the first. Can we blame them?

“What worries me deeply,” former Socialist presidential candidate David McReynolds recently said on Facebook, “is that ‘Trumpism’ will not vanish even if he is defeated. The forces of bigotry and hatred which he has unleashed have entered American life for a long visit.” Put more scientifically, it will take structural entrenchment of economic justice to defeat Trumpism. But right now, the tools we have are a combination of popular movement and electoral politics, and the forces we’re pushing against have more money than we do. What is to be done?

Here’s a solution: With the resources we have, create and implement a policy agenda that pushes back against both neoliberalism and incipient fascism – and be willing to work with anyone who agrees with that agenda. That’s what large sections of left Democrats, Greens, socialists and others have been doing since the People’s Summit in Chicago in June, where 3,000 people gathered to discuss policies, strategies, tactics, and values. Two weeks ago, at the People’s Convention in Philadelphia, the process that began in Chicago culminated in a series of comprehensive resolutions and specific actions, both electoral and systemic.

In fact, Bernie Sanders supporters, Greens and socialists have been talking and colluding at an accelerated pace since Sanders began his campaign, and they had firm roots from which to grow their partnerships. Following Sanders’s inspiring endorsement on Aug. 2, Washington State Sen. Pramila Jayapal, an ally of socialist Seattle City Councillor Kshama Sawant, won the nomination for the U.S. House seat in that state’s 7th District, previously occupied by progressive Jim McDermott. She is now favored to win in the general election.

As a woman of color, a progressive Democrat, an ally of a socialist, and a fellow traveler with Greens, Jayapal represents a growing movement that rejects the limits of traditional party politics and simply doesn’t care what the DNC thinks of outspoken leaders like Kshama Sawant. Writer and activist Jennifer Nix, who attended the People’s Summit in Chicago, said the growing movement sees “#DemExit as one strategy of dissent among many, for people who feel they must conscientiously object to the DNC’s bias and the way the nomination process was handled, and for those who do not feel represented by Clinton.”

But others, she told me, can stay in the Democratic Party, and insiders can work with outsiders to elect progressive candidates. Those on the “inside” and the “outside” can be allies.

REVOLUTIONARY – BUT NOT THE REVOLUTION

It’s not the glorious revolution, maybe because revolutionary politics ain’t what they used to be. When trying to engage with the rules of corporate politics by themselves, left Democrats, Greens and other economic justice warriors are square pegs. Their arguments seem too theoretical and systemic in the face of stopping Donald Trump: too gloom-and-doom to some voters, too optimistic to others. The Greens are experiencing the awkwardness of suddenly being under constant attack, and the unmanageability of the pluralism that is their membership. Even if the party and its presidential candidate Jill Stein were flawless (and no party or campaign ever is), it’s tough to hold your own against presidential candidates who have roughly 130 times as much money as you.

But as part of a coalition, Greens are helping plot policy agendas and shaping candidates, with one foot in the party and the other in principle. Some of their local candidates for office are spectacular. With the party’s call for single-payer health care and an aggressive climate strategy, the Greens’ policy platform can become a template for progressive candidates regardless of party affiliation. If candidates are willing to work cross-party, as they continue to do in Seattle, each faction will have strength beyond its numbers.

Nix, founder of the art and activism collective ModNomad Studio, suggested to me that activists are reaching out to one another because their working relationships are more real – and important – than the media messaging we consume.

“There has been so much confusion and cognitive dissonance this cycle, so much establishment misinformation and outright lies,” Nix said. “Many of us are still trying to get our bearings. We can’t expect that a solid, organized coalition has happened quite yet, but it feels like we are becoming more organized and galvanized than ever before.”

When she attended the People’s Summit in Chicago, the California primary had just ended and “as you can imagine, I expected to walk into a rather depressed affair. What I encountered was an energized and inspiring event centered on tangible tactics and new coalition-building that transcends old divisive frames and party affiliations.”

In fact, the People’s Convention was a “highly participatory process,” according to David Cobb, outreach director of Move to Amend, which is pushing for a constitutional amendment to overturn Citizens United, and a former Green Party presidential candidate. Cobb was awed by the “Democrats, Greens, socialists,” and others who shared the podium while co-created a “revolutionary” progressive platform.

“I have never seen this level of commitment to non-sectarian principles,” he said. The platform includes ranked choice voting for mayor, governor, president and other single-winner elections; guarantees of economic freedoms such as housing, health, food and adequate income; universal health care; solving the material and legal contexts of racial discrimination; and a full transition to an ecological, climate-friendly economy. None of these will be electorally possible without amending the Constitution to ban corporate entities from the rights of personhood, and regulating the financing of political campaigns, added Cobb, who invited readers to read the proposed constitutional amendment.

The agenda coheres nicely with the new policy agenda proposed by Black Lives Matter, deep in economic justice and restructuring as well as redistribution of goods. The Sanders Institute and a growing number of like-minded organizations will also provide support for this electoral and policy movement.

WHO KNOWS WHERE WE’RE GOING?

Nix and Cobb both described a sense of not knowing what precise form the new pluralist progressivism would take down the road. Nix said it might snatch the Democrats “from the corrupt and willfully paralytic elites, or build a new, bigger and better political party. We can’t know yet what it will be until we continue to build, strengthen and network some of our own institutions for the grass roots, electoral and media work to be done.”

For Cobb, “a new level of progressive left unity is emerging. I don’t know whether there will be a political party to represent it, [and] I hope it will be the Green Party. But social change in this country has always required both social movements and an electoral wing. Our hope is that it will be a movement capable of taking on not only corporate power but corporate rule.”

Some entrenched establishment Democrats will be tougher to take down than others. (In spite of her national troubles, Debbie Wasserman Schultz still leads her Sanders-supported challenger Tim Canova by eight points, with the primary just a few weeks away). The DNC has withstood progressive movements before.

I asked Jennifer Nix what she thought was required to continue to push forward, independent of party guardians. “Funding,” she said, “legal and policy support,” and an “effective media to tell our stories.” Also, “language that keeps all of us from talking past each other,” and “we need to bring in some disillusioned right-leaning independents and Republicans.” Most importantly, Nix added, “we can’t alienate people by digging in our heels and attacking all those who are fearful of a Trump presidency.”

“I have been struck by how there are many similarities between our realities in the U.S. and Honduras, from state and police violence to environmental racism to poverty and exclusion from an economic system that only values profit and ignores peoples’ needs and dignity,” Laura Cáceres told me. “We need to continue to create a sisterhood and brotherhood and connection between our people and recognize the similarities of our struggles.”

Here’s a suggestion then: Take whatever interest in the presidential election you want, and vote for who you want, but start devoting five or more hours a week to making your state and local government greener, redder and better. Read about and reach out to the organizations mentioned in this article, and ask yourself what kinds of policies and leaders, and what kind of economics, would honor the Cáceres family.