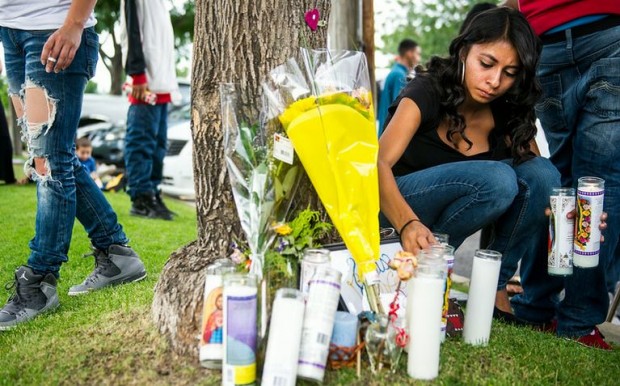 Above: Elizabeth Lopez, of Denver, places lit candles at the base of a tree during a candlelight vigil for Ryan Ronquillo at the parking lot of the Romero Funeral Home on Sunday, July 06, 2014 in Denver, CO. The funeral home parking lot was the site where Ronquillo was killed by the Denver Police. Source: The Denver Post.

Fundraiser Seeks to Raise Money for Funeral, To Challenge Police Killing In Court and Kick off Campaign for Justice and Accountability for Ryan Ronquillo

On July 2, 2014, Denver Police shot and killed 20-year old Ryan Ronquillo, who was unarmed, outside of his friend’s funeral at the Romero Family Funeral Home in Northwest Denver.  Ronquillo was reportedly shot 12 times while in his car after he stepped outside of the funeral to decompress.

The Denver Police Department (DPD) claims that Ronquillo was using his car as a weapon when he put it in reverse, but the family and witnesses have stated this is untrue, saying instead that unmarked police cars sped into the parking lot and that many people who were in attendance at the funeral did not initially understand who was shooting at Ryan.  Witnesses also claim that “Ryan was left to die, choking on his own blood, as police denied medical help at the scene and instead waited for paramedics to arrive before any aid was administered.”

The Ronquillo family, overwhelmed with the grief and distress of Ryan’s murder, has understandably been limiting contact with the press. But Denver resident and community advocate Dave Shapiro, who befriended the Ronquillo family after seeing flyers in the neighborhood demanding justice for Ryan, said that Ryan was a Broncos fan, a pillar for his family, and was his father’s best friend.

Shapiro also explained that the DPD allege that they had Ronquillo under surveillance all morning and were in the process of serving a warrant for “auto theft and other felonies.” He stated that although police considered Ronquillo a “flight risk,” no police officers were under the impression that he was armed and dangerous.  The police claim that approaching Ronquillo at a funeral was “tactically beneficial,” Shapiro stated.

“In the end,” he continued, “instead of a peaceful arrest anywhere else, people who were already in the process of mourning one lost youth had to witness the murder of another.”

With many people and small children at the funeral, many community members have been outraged, saying that DPD’s “tactic” was irresponsible and disrespectful to the already mourning families.

News and outrage about yet another DPD killing of an unarmed man of color spread quickly, and a response is already underway. A group of local activists and musicians from the community came together to organize a fundraiser and concert for Friday, August 8, 2014 at Denver’s historic Atzlan Theater aimed at raising funds to pay for Ryan’s funeral and burial. The group is encouraging as many people as possible to donate, not only to support the Ronquillo family – who are currently facing foreclosure and eviction from their home – but also because excess donations will go towards the cost of hiring an attorney to challenge the police shooting of Ronquillo in court and to defend against the unjust foreclosure.

The fundraiser will include performances from local Denver artists Johnny 5 of the Flobots, Sole, Molina Speaks, Stay Tuned, and more.  The fundraiser organizers explained that they want the event to be a place where the community can network and organize future actions to support the Ronquillo family and to combat police violence.

“We want people to learn more about who Ryan was, we want to show his family solidarity, and also teach the community how they can respond to police terrorism,” Shapiro stated.

Many residents of Denver area worry about the patterns of police violence in their neighborhoods. A community member from nearby Aurora who wished to remain anonymous said, “I am concerned about the paramilitary attitude of the police. Increasingly, we are seeing a belief that the police are just the domestic version of the armed forces. They are not! They are a citizen force, not a force against citizens.”

The artists performing in the August 8th concert agree, saying they are using their art to support the victims of the tragedy and to fight for real accountability for the Denver Police Department, who have a long and shameful record of racial profiling, police brutality, and corruption. Some of the supporting artists have offered their rationale for participating in the fundraiser.

“Today, heading in to work listening to Denver’s most popular radio station/morning show one of the show hosts made a statement how part of the problem with police violence is that folks ‘don’t know how to submit and get arrested.’ This is far from the issue. One’s unwillingness to lose their own freedom shouldn’t ever result in death, ever… not when dealing with law enforcement. There is no regaining freedom from beyond the grave. It is the police’s duty to ‘serve and protect’ all in the name of the law, to uphold the law, and murder itself is one of our most punishable offenses. Yet we find one too many of those whom we’ve given the power to strip our freedoms, take the power to their head, pushing their ego to make them believe they are above the law. This isn’t in the job description, and it isn’t something anyone should be OK with.”

“The DPD operates like an occupying army, they murder with no accountability.  This is not an isolated incident, these murderous militarized police forces do not serve the needs of the population; they are contrary to them.  The story of Ronquillo’s death is heart breaking, tragic, and completely unnecessary.  Why are they arresting people at funerals?  Why are they killing people at funerals?  Why is there no accountability for murderous cops in Denver?  The message we are receiving from the mainstream media and the cops is, ‘If you are a person of color with a criminal record, the cops have the right to kill you.'”

Unfortunately, Ronquillo’s murder at the hands of the DPD is part of a long, tragic trend in Denver. “Denver has a history of police and politicians deeply rooted in the Klan,” Shapiro explained.”Denver Police have a history of killing black and brown men.  Look at Marvin Booker, who was a homeless preacher, Alonzo Ashley who was a middle-aged man at the zoo, they were both killed by the DPD.”

Organizers hope that the fundraiser is just the beginning of what they hope will become a broader effort to make justice for Ryan a part of the larger ongoing effort to hold the DPD accountable for its consistently violent practices and to see the police force transformed into one that serves the public instead of endangering it.

To support the Ronquillo Family with a donation, please visit http://www.gofundme.com/bm8kg8. For more information on the fundraiser concert, visit https://www.facebook.com/events/866129420083409.