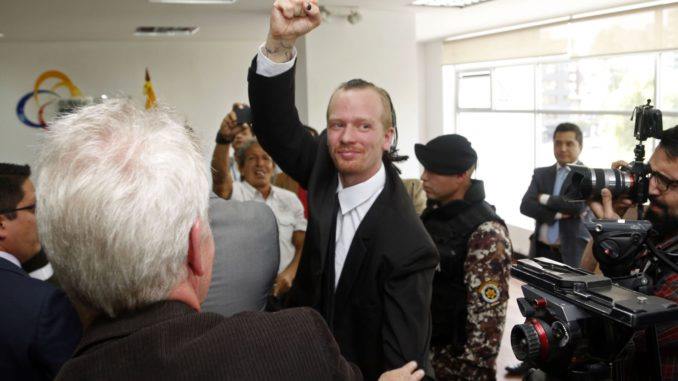 Above Photo: Ola Bini during a legal proceeding related to his case.

According to the defense team representing Ola Bini in Ecuador, the pre-trial process alone was littered with over 65 due process violations.

Rights groups both within and outside Ecuador demand charges be dropped against him.

The trial against Ola Bini, Swedish software developer and digital rights activist, is scheduled to begin on Wednesday, January 19, and continue for three days. The long-awaited trial comes after multiple delays, recusal of judges, documented harassment and surveillance of Bini, and constant shifting of charges from the prosecution leading to serious allegations of political interference in the case.

In the meanwhile, digital rights advocacy groups and progressive media outlets are pushing for the Ecuadorian authorities to ensure a fair trial, that is not only free from political interference, but also made in “accordance with the law and expert technical criteria.”

A group of observers, representing Regional Foundation for Human Rights Advisory (INREDH) and Observatory of Rights and Justice (ODJ), along with a coalition of rights groups and journalists from independent media outlets, will be attending the trial, to make sure that Bini is guaranteed his right to a fair trial.

Tomorrow, after numerous delays, a court in Quito, Ecuador is scheduled to have the trial on Ola Bini’s case. This comes over 2.5 years after his arrest. We call on Ecuadorian authorities to guarantee a fair trial.

Bini was arrested in April 2019 in the Quito airport by Ecuadorian authorities, just hours after the forcible expulsion and arrest of Wikileaks founder Julian Assange from the Ecuadorian embassy in London.

Irregularities in the case can be traced back to his arrest, as the government did not file charges during or immediately after the arrest, and made baseless public allegations stating that Bini had supposedly conspired with Assange to commit cybercrimes and was a “Russian hacker”. Charges were eventually filed against him much after the arrest.

Since his irregular detention and arrest, Bini’s case was marked with a series of due process violations, which led to his release 70 days after his arrest due to a habeas corpus decision which found his detention illegal. The presiding judge in the case had to be recused, after the defense raised concerns of mistrial owing to political interference from the then Lenin Moreno administration.

Before being removed from the case, the judge was able to sanction the trial. The defense and Bini’s supporters have raised questions over the judge’s decision and the reasoning behind the process to sanction the trial. The defense has listed at least 65 due process violations and also argued that the basis of the prosecution’s charges lacks solid evidence. This has been echoed by human rights and computer security advocacy groups as well.

Despite acknowledged due process violations in #OlaBini‘s prosecution, and flimsy allegations against him, the open source developer’s criminal trial will be held from Wednesday to Friday this week. #FreeOlaBini https://t.co/u3c4KRMnfG pic.twitter.com/Kd4mCqd4W8