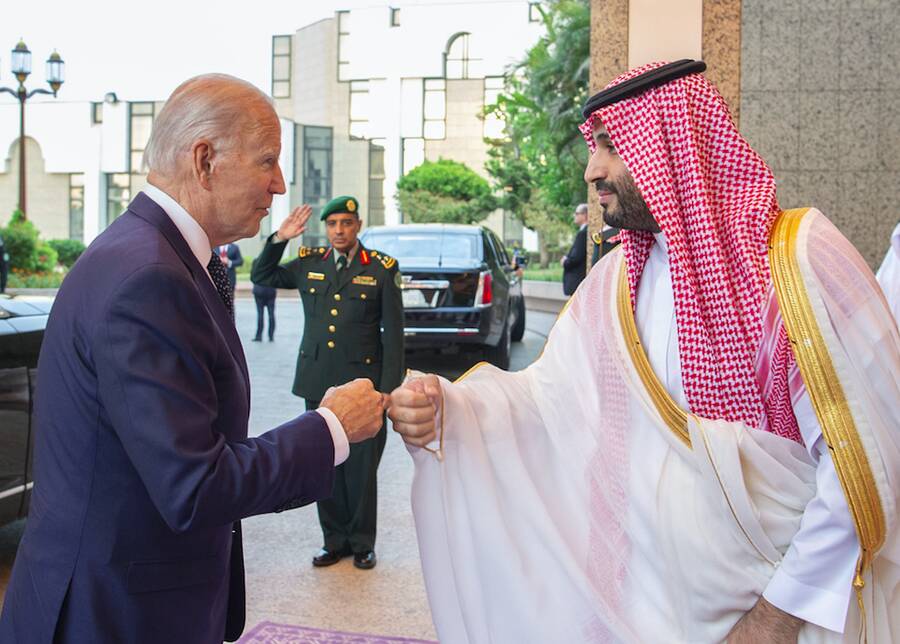 After The Fist Bump

President Biden’s fist bump with Saudi Crown Prince Mohammed bin Salman (MBS), and the president’s up-close-and-personal handshake with former Israeli prime minister Benjamin Netanyahu, sparked outrage and cries of hypocrisy from human rights activists, supporters of Palestinian rights, and defenders of democracy. MBS is, after all, responsible for the murder of journalist Jamal Khashoggi, and the war that has devastated Yemenis. Netanyahu, currently on trial for multiple corruption charges, presided for a dozen years over Israel’s apartheid system, settlement expansion, war crimes in Gaza, and the murders of several journalists even before Shireen Abu Akleh was killed in May.

Outrage was absolutely called for. Symbolism is important. But the fist bump and the handshake were the least of it.

Biden’s first presidential trip to the Middle East had a lot to do with consolidating U.S. power and countering Chinese and Russian influence there, strengthening the Israeli- and Saudi-led anti-Iran coalition under U.S. leadership, and increasing arms sales. The timing had a lot to do with the war in Ukraine, and the price of oil at home, with global shortages and price hikes linked to war-driven sanctions against Russian crude. Biden’s trip had a message for all of that.

MBS and the Israeli leadership have been eager to reaffirm their tight partnerships with the United States, following their strategically consistent but symbolically extreme embrace by Trump. Biden’s greetings made clear that consistency was indeed his agenda, and that apartheid, war crimes and murder of journalists would pose no barriers to those special ties between Washington and its favored Middle East allies. But far more consequential were the actions — what Biden did and didn’t do during his meetings.

He did reaffirm the strategic ties with both Saudi Arabia and Israel, making clear that human rights concerns, even if mentioned, would have no impact on actual relations — and, crucially, no impact on billions of dollars in military aid and arms sales. He did reiterate the pride of place that both Israel and Saudi Arabia hold in the U.S. government’s Middle East policy: Their bilateral ties with Washington, and their no-longer-secret ties with each other, remain at the center of the U.S. strategy to continue as the dominant global power in the region.

The president did say the right words — that human rights matter, that he believes MBS is indeed responsible for the murder of Khashoggi, and that he still supports “equal measures of freedom, security, prosperity, and democracy” for Palestinians and Israelis.

But what didn’t Biden do? He did not condition military sales to Saudi Arabia on ending the war against Yemen, despite the Arms Export Control Act’s requirement that U.S.-provided arms be used for “internal security” or for “legitimate self-defense.” Like all his predecessors, he did not demand that U.S. military aid be conditioned on Israel ending any of its specific human rights violations that keep equality out of reach for Palestinians. He did not announce plans to cut that military assistance, even though the Leahy Law prohibits aid to any military unit that “has committed a gross violation of human rights,” and the U.S. admits the Israeli military was “likely responsible” for killing Shireen Abu Akleh.

Despite his public assertions about human rights, Biden did not announce or make any moves to actually hold either of these key U.S. allies to account for their violations.

When Biden chose Saudi Arabia for his first visit to the region as president, the regime was thrilled, seeing the trip as a chance to reclaim its primacy as Washington’s favorite Arab country. What MBS wanted was, indeed, primarily symbolic — a handshake (or, in this case, the notorious fist bump), a globally televised reminder of his stature meeting the U.S. president as an equal. He wanted the return to normal optics for U.S.-Saudi ties, after Biden’s campaign pledge to treat Saudi Arabia as a “pariah.” The crown prince got all that.

But he also wanted some other things, way beyond the symbolic level. He wanted continued arms deals, U.S. backing for Saudi Arabia’s military dominance as the top U.S. proxy in the Arab world, and a clear grant of impunity for human rights violations, whether war crimes against Yemeni civilians or the assassination of a U.S. resident journalist in the Saudi consulate in Istanbul. And he got all that too.

Biden claimed he pushed back, telling MBS directly that he believed the prince was responsible for the murder of Jamal Khashoggi. Then he left it there, and turned to business as usual. He could have gone on to say, “And because we hold you responsible for that murder, and because you are largely responsible for the worst humanitarian catastrophe in the world today, the war in Yemen, we’re not selling you any more arms until there is some kind of real accountability.”

In fact, Biden said nothing of the kind. His only apparent request, not made publicly, was for Riyadh to increase oil production levels to help replace Russian oil and lower global — and U.S. — fuel prices. What if, rather than urging more oil production, Biden had told MBS that the U.S. instead planned to help provide Europe with massive economic support for a fast transition to sustainable energy to replace its dependence on fossil fuels? (As it turns out, Saudi Arabia has just doubled its imports of cheap Russian oil at sanctions-reduced rates for domestic use, so it can sell its own crude on the global market at today’s sky-high market prices.)

Biden also emphasized both the Saudi and Israeli role in challenging Iran. That meant justifying virtually unlimited weapons sales to Saudi Arabia. For Israel, while some rhetorical disagreements did surface, the U.S. willingness to support Israel’s role at the center of the anti-Iran coalition remained at the top of every statement.

In “The Jerusalem U.S.-Israel Strategic Partnership Joint Declaration,” adopted July 14, the United States reaffirmed its “commitment never to allow Iran to acquire a nuclear weapon.” For Israel, that’s never been enough. Tel Aviv “reserves the right to self-defense and to action against Iran in order to block its nuclear program”—threatening military force against Iran, even though it does not have and is not building a nuclear weapon. The Biden administration, still stalling on efforts to return to the Iran nuclear deal that Trump abandoned in 2018, made up for the “nuclear weapon” versus “nuclear program” distinction by threatening “to use all elements of its national power” to prevent an Iranian weapon — a direct reference to military force.

The distinction between a “nuclear weapon” and “nuclear program” might seem simply rhetorical, but it defines a crucial difference in how each government determines, at least rhetorically, when it is prepared to go to war. Israel says it is prepared to go to war essentially now, since Iran has a program involving nuclear enrichment; the U.S. position is that it would use military force to prevent an actual weapon from being obtained. The difference has been around for years, but Biden felt compelled to reassure his Israeli hosts that despite this slight divergence in conditions, Washington is still prepared to go to war against Iran.

Overall, the joint declaration celebrates the “unshakeable U.S. commitment to Israel’s security.” It includes Washington’s guarantee of Israel’s “qualitative military edge,” and pledges to “preserve and strengthen Israel’s capability to deter its enemies and to defend itself by itself against any threat or combination of threats.” And the declaration even promises more military aid, beyond the current level of $3.8 billion every year. While that commitment is not so unusual, the declaration then adds something not so commonly found in diplomatic documents: the claim that all those U.S. commitments are “sacrosanct.” That’s a word rarely used to describe political positions. Merriam-Webster defines sacrosanct as “holy” or “immune from criticism.” Given the criticism from human rights defenders, Palestinian rights organizers and anti-war activists that has followed Biden’s trip to the region, the notion that continuing U.S. military aid and protection of Israeli apartheid will somehow remain “immune from criticism” seems like wishful thinking on the part of the White House.

There were other points of clear agreement. Biden and his Israeli counterparts signed off on an attack on the Palestinian-led BDS (Boycott, Divestment and Sanctions) movement, promising to “combat all efforts to boycott or de-legitimize Israel,” and to protect Israel at the United Nations and the International Criminal Court. And they agreed to allow all Israelis to enter the United States under the supposedly reciprocal visa waiver program, despite Israel’s refusal to allow all U.S. citizens the same privilege. In fact the State Department’s own advisory warns that “U.S. citizens of Arab or Muslim heritage (including Palestinian-Americans) have experienced significant difficulties and unequal and occasionally hostile treatment at Israel’s borders and checkpoints.”

In 2017 Donald Trump went to Saudi Arabia, where he signed an arms deal worth billions. In 2018 he announced a set of new U.S. policies towards Israel: moving the embassy to Jerusalem, recognizing Israel’s annexation of the Syrian Golan Heights, and declaring the Jews-only settlements across the West Bank and occupied East Jerusalem to be legal. Biden didn’t ever agree with the Trump administration’s positions on Israel, and he called Saudi Arabia a pariah. He could have reversed Trump’s policies on day one in the White House. But now, 18 months into his presidency, Biden has to claim those Trump positions as his own. Consistency, not reversal, describes his Middle East policy. The fist-bump was the least of it.