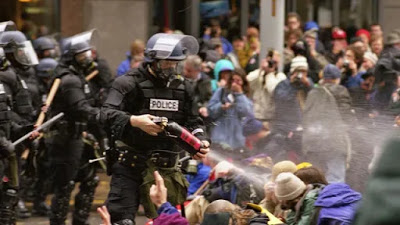 AG Barr: “We Must Have Zero Tolerance For Resisting Police.”

Above Photo:  Cops dealing with protesters in Ferguson, Missouri (source)

Watch these clips in order. The tech is not just used for personalized advertising, but also “criminal investigation” (as defined by the state), which the second clip makes clear near the end.

I’ve been meaning to write for a while about the many scattered reports of the coming increased domestic surveillance and clampdown in the U.S. — a clampdown that stretches from private companies like Facebook, which is planning to open a surveillance backdoor in WhatsApp, to the exponential growth of facial recognition technologyand its use, to the Pentagon’s interest in using marines to fight in “megacities,” to the way climate change panic and chaos may well fuel domestic and global authoritarianism., to the Pentagon’s high altitude surveillance balloons to “deter narcotic trafficking and homeland security threats,” which now being tested over the Midwest.

But let’s start here, with William Barr. In a speech before the Fraternal Order of Police, a national organization that lobbies for police and police officers and is, in general, the umbrella organization for both local cop labor unions and local cop non-union activist organizations.

You can imagine what side, for example, the FOP was on after the police surrounded and assaulted Rodney King in Los Angeles. Dewey Stokes, then-FOP president said, “You have to put things in proper perspective. […] These are not common occurrences. They are the result of stress on the job, emphasis of the system on the criminal and not the victim, and the media’s exploitation of the negatives of law enforcement.” Statements like this are typical of the FOP and tell you all you need to know about where this organization stands and what it stands for — cop culture, in all its ugly brutalizing force.

In his speech, Attorney General Barr said there must be — ready? — “zero tolerance for resisting police” and added that public figures in the media and elsewhere should “underscore the need to ‘comply first, and, if warranted, complain later.'”

“Those who resist must be prosecuted for that crime. We must have zero tolerance for resisting police.”

This matters not because William Barr is the pro-Trump enemy du jour, but because this attitude of subservience to the police as agents of the state is widely and commonly shared in our bipartisan neoliberal world. Kamala Harris, for example, Alameda County and California former “tough cop,” has just unveiled a program that responds to domestic terrorism by expanding the already criminal asset forfeiture program to the property those merely thought to be potential criminals.

The right of the state, and whoever controls the state, to aggressively enforce its dominance must not be questioned, and the police, from Ferguson, Missouri to the streets of Los Angeles, are its most brutal and atavastic representatives.

They are also its most cheered representatives. In the aggregate, we are a deeply prosecutorial country with a long and abiding love of aggressive punishment. Cops on TV are all “good apples,” except for the few, easily identified, easily vilified bad apples, whom the good apples all work to defeat. “Law and order” as a rallying cry will always sell in America. Kamala Harris’s aggressive “tough cop” reputation, even as she brutalized her own black community, may well be one of her strongest electoral assets.

Who but the Bernie Sanders of the world will resist the call that William Barr just issued — that there be “zero tolerance” (a classic American glory phrase, steeped in implied goodness) for resisting police aggression, that the first duty of a citizen is to “comply first, and if warranted, complain later.” (Note the use of “complain,” which infantilizes the protest against unprovoked and often-fatal brutality.)

No neoliberal candidate will dare resist that call.

Given the news, I’m not optimistic.