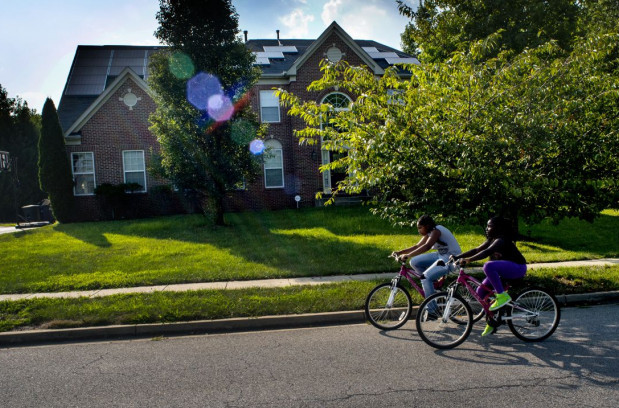 ‘Against All Odds’ Is Required Viewing For White Progressives

Above Photo: Harmony Bryant, 13, and Jayla Bryant, 10, ride their bikes in their neighborhood along Hillrod Lane on Aug. 5, 2014 in Kettering, Maryland. The Bryants were part of an expanding black middle class that was accumulating wealth in Prince George’s County but the housing crash stripped more than half the value from their home. (Photo by Michel du Cille/The Washington Post via Getty Images)

If we’re going to throw terms like “structural racism” around, we should understand what they mean and the work white people have to do. This film lays it out.

“Structural racism” has become a buzzword in white progressive circles. But every time I push a white writer to break down the meaning behind the words without success, or I see a Black Lives Matter sign in an apartment window in a gentrified neighborhood where longtime residents of color are now priced out, I have to ask myself: How much we really know about the theoretically woke words we’re throwing around?

We’re finally starting to call out racial disparities, but do we understand the history that creates them?

We’re finally starting to call out racial disparities, but do we understand the history that creates them? We pledge our allegiance to inclusiveness and shared power, but do we examine the roles our own lives play in maintaining policies, practices and cultures that continue to harm African-American friends and family, neighbors and co-workers?

It is for these reasons that I believe every white progressive (and, really, every white person) should see Bob Herbert’s new documentary, Against All Odds: The Fight for a Black Middle Class.

Herbert presents an airtight case of structural racism in America — and it’s a case I’m laying out at length here in case you don’t see the film. If we are going to throw these words around, we better understand their meaning and use that understanding to inform the work that we — white people — must do.

When 6 million African-Americans fled the horrors of the South during the Great Migration, they discovered new forms of discrimination and exclusion in the North. Some found work in factories, but most worked menial jobs — as servants, janitors, drivers and cooks — while they were charged exorbitant rents for substandard housing in the worst neighborhoods.

One of the only pathways to the middle class that was available for black Americans was self-employment. But without access to capital, it’s hard to grow a business. Herbert’s grandfather managed to open an upholstery business that staved off the worst of the Great Depression for his family. His father, too, opened two stores in the 1960s and ’70s. But when his father was in a position to expand and compete with larger, white-owned businesses, he was locked out by the banks — and that was in New Jersey.

“They weren’t giving bank loans to guys who looked like my father,” Herbert says.

This lack of access to capital is a constant refrain throughout the black experience in America. When black families could finally afford to move out of ghettos, banks wouldn’t give them mortgages. Lenders took maps and drew red lines around neighborhoods where they wouldn’t loan to black families. (Hence the term “redlining.”) Moreover, the federal government wouldn’t insure home loans for black people — it was literally written into the Federal Housing Administration handbook, according to former housing organizer Jack Macnamara.

As a result, black families often resorted to buying homes “on contract,” which meant purchasing them — nat double or triple the value — from shady brokers on a monthly installment plan. There was no opportunity to build equity for black families — when they couldn’t make a payment they were simply tossed out and the seller would cut the same deal with another black family. It is estimated that this legal practice drained at least $500 million from the black community in Chicago alone between 1940 and 1970 (and according to The Washington Post the practice is making a comeback).

Decades of wealth that black families had managed to build up vanished overnight.

Predatory schemes were still rampant in the lead up to the housing collapse in 2008. Rather than having access to prime, fixed-rate home mortgages, black Americans earning annual salaries of $100,000 were more likely to receive toxic, subprime loans (think low teaser interest rates that later skyrocket) than white Americans with an income of just $30,000. Major commercial banks actually incentivized these deals, paying mortgage brokers and loan officers more for the subprime loans and then selling them to eager investors who were promised higher returns.

“Businesses, banks and brokers were deliberately wealth-stripping from communities of color,” says Dr. Maya Rockeymoore, president and CEO of the Center for Global Policy Solutions.

Keeping blacks “in their place”

Racism wasn’t all institutional. Many white citizens and politicians have conspired to limit the social and economic advances of African Americans any time they felt their own status was threatened.

For example, beginning in the mid-1940s, thousands of whites in Chicago participated in a series of riots to keep single black families out of their neighborhoods. In 1951, when an army veteran attempted to move into a rented apartment with his family of four, they were stopped by a mob of 4,000 people that ransacked their belongings and then burned the entire building down. Similarly, in 1959, when a black family moved into their newly-purchased home, a mob of 5,000 people stoned the house, threw lit torches, and chanted “we want blood.”

The history of white rioting has been buried.

Author Beryl Satter says that the riots were “common” and yet the history of white rioting has been “buried.”

“When people think of violence and riots in the street, they always think of the 1960s when black people rioted. But when white people rioted, it doesn’t even have a name,” Satter says.

Meanwhile, politicians stoke hostility towards blacks in more subtle ways. The film includes remarkable audio of Lee Atwater, advisor to Presidents Ronald Reagan and George H.W. Bush, discussing some of the tactics used to secure the votes of racist whites.

Atwater notes that politicians moved from saying “nigger, nigger, nigger” to more covert, racist talking points about “forced busing, states’ rights and all that stuff.” Atwater says elected officials have been forced to adopt “much more abstract” language—often called “dog-whistles”—to communicate that voting for them means “blacks get hurt worse than whites.”

Herbert’s interviews with black professionals render a vivid portrayal of what middle class African Americans continue to experience in their daily lives, even internally.

Karla Swinton, a marketing manager, talks about wearing “a mask” at work so that when she hears “racially offensive” things “you take it in stride, you take a breath, you keep moving.”

Z Scott, a partner at a major law firm and former federal prosecutor, talks about being asked to type for people, or being treated as incompetent and not deserving “the chair you are sitting in.”

“Black professionals, we’re all suppressing a certain amount of rage… and it’s something that you have to manage,” she says.

And then there is the inherent insecurity of trying to provide for one’s family, knowing that you haven’t benefited from generations of government entitlements like tax deductions on mortgage interest, 401(k)s and health insurance — or even benefits under Social Security and the GI Bill — as white families have.

Swinton’s husband, Brent, a professional fundraiser, says, “Being black middle class means wherever you’ve arrived you’ve only been there just in the span of your life.” He describes driving through a nearby white suburb and reflecting, “There is something that takes place over more than one generation that allows them to pass along a much greater head start…. I want to do that for my kids.”

Progressives need to fight to make sure black Americans have someone and something to vote for.

At a recent screening in the nation’s capital, Herbert spoke of his hopes for the film: “I want people to see things that they may not have been aware of. I want them to be appalled by it. And I hope that people will take action and say ‘we are not going to tolerate this anymore.’”

Herbert was joined by Rep. Elijah Cummings (D-MD), who appears in the film and shares his own story of being the son and grandson of sharecroppers. Both men agreed that the easiest way to create change is simply to vote—including in off-year elections.

But progressives need to also fight to make sure black Americans have someone and something to vote for. We need to support candidates who will speak the truth about structural racism in our past and present, and fight for the new equitable policies that are needed if we are serious about equal opportunity — like targeted jobs programs, greater affordable housing and increased public school funding in communities that have been historically and chronically disadvantaged by racist policies and actions.

Indeed, in the wake of the 2016 election, with so much focus on the white working class, we need to be more vigilant—and better students of history—if we are going to find real solutions.

Being a “white progressive” involves incessantly asking tough questions — of oneself, loved ones and social circles — about the ways structural racism is threaded throughout our country, cultural norms and day-to-day interactions. We are not entitled to comfort and confidence — those should be fleeting sensations. There is much to learn and even more to do to truly combat and eradicate structural racism.

As Herbert says toward the end of the film: “I don’t even think the full story of overt racism in this country has been well told… The more subtle forms of discrimination are not addressed at all. People pretend that those subtle forms — which are incredibly debilitating— don’t even exist.”