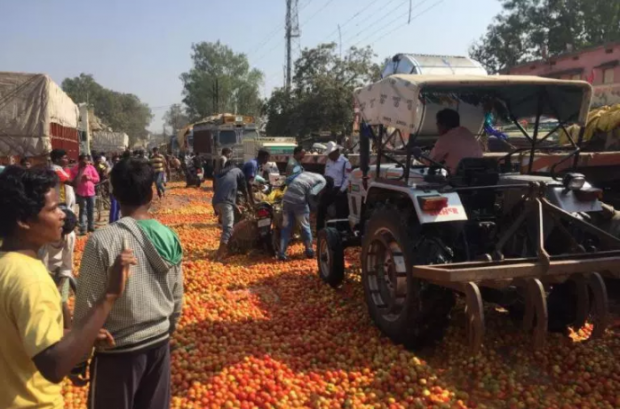 Agriculture To Demonetisation: Made In Washington

Above Photo: From countercurrents.org

A version of the following piece was originally published in June 2016. However, since then, India’s PM Narendra Modi has embarked on a ‘demonetisation’ policy, which saw around 85 percent of India’s bank notes becoming invalid overnight.

Emerging evidence indicates that demonetisation was not done to curb corruption, ‘black money’ or terrorism, the reasons originally given. That was a smokescreen. Modi was acting on behalf of powerful Wall Street financial interests. Demonetisation has caused massive hardship, inconvenience and chaos. It has affected everyone and has impacted the poor and those who reside in rural areas (i.e. most of the population) significantly.

Who does Modi (along with other strategically placed figures) serve primarily: ordinary people and the ‘national interest’ or the interests of the US?

We don’t have to dig too deep to see where Modi feels at home. Describing itself as a major ‘global communications, stakeholder engagement and business strategy’ company, APCO Worldwide is a lobby agency with firm links to (part of) the Wall Street/US establishment and functions to serve its global agenda. Modi turned to APCO to help transform his image and turn him into electable pro-corporate PM material. It also helped Modi get the message out that what he achieved in Gujarat as Chief Minister was a miracle of economic neoliberalism, although the actual reality is really quite different.

In APCO’s India brochure, there is the claim that India’s resilience in weathering the global downturn and financial crisis has made governments, policy-makers, economists, corporate houses and fund managers believe that the country can play a significant role in the recovery of the global economy. APCO’s publicity blurb about itself claims that it stands “tall as the giant of the lobbying industry.”

The firm, in its own words, offers “professional and rare expertise” to governments, politicians and corporations, and is always ready to help clients to sail through troubled waters in the complex world of both international and domestic affairs.

Mark Halton, former head of Global Marketing and Communications for Monsanto, seemed to agree when he praised APCO for helping the GMO giant to:

“… understand how Monsanto could better engage with societal stakeholders surrounding our business and how best to communicate the social value our company brings to the table.”

If your name is severely tarnished and you need to get your dubious products on the market in countries that you haven’t managed to infiltrate just yet, why not bring in the “giant of the lobbying industry.”

As a former client of APCO, Modi now seems to be the go-to man for Washington. His government is doing the bidding of global biotech companies and is trying to push through herbicide-tolerant GM mustard based on fraudulent tests and ‘regulatory delinquency‘, which will not only open the door to further GM crops but will possibly eventually boost the sales of Monsanto-Bayer’s glufinosate herbicide. In addition, plans have been announced to introduce 100% foreign direct investment in certain sectors of the economy, including food processing.

This opening up of India to foreign capital is supported by rhetoric about increasing agricultural efficiency, creating jobs and boosting GDP growth. Such rhetoric mirrors that of the pro-business, neoliberal dogma we see in APCO’s brochure for India. From Greece to Spain and from the US to the UK, we are able to see this rhetoric for what it really is: record profits and massive increases in wealth (ie ‘growth) for elite interests and, for the rest, disempowerment, surveillance, austerity, job losses, the erosion of rights, weak unions, cuts to public services, bankrupt governments and opaque, corrupt trade deals.

APCO describes India as a trillion-dollar market. Note that the emphasis is not on redistributing the country’s wealth among its citizens but on exploiting markets. While hundreds of millions live in poverty and hundreds of millions of others hover above it, the combined wealth of India’s richest 296 individuals is $478 billion, some 22% of India’s GDP. According to the ‘World Wealth Report 2015’, there were 198,000 ‘high net worth’ individuals in India in 2014, while in 2013 the figure stood at 156,000.

Paving the way for plunder

Modi recently stated that India is now one of the most business friendly countries in the world. The code for this being lowering labour, environmental, health and consumer protection standards, while reducing taxes and tariffs and facilitating the acquisition of public assets via privatisation and instituting policy frameworks that work to the advantage of foreign (US/Western) corporations.

When the World Bank rates countries on their level of ‘Ease of Doing Business’, it means nation states facilitating policies that force working people to take part in a race to the bottom based on free market fundamentalism. The more ‘compliant’ national governments make their populations and regulations, the more attractive foreign capital is tempted to invest.

The World Bank’s ‘Enabling the Business of Agriculture’ – supported by the Bill and Melinda Gates Foundation and USAID – entails opening up markets to Western agribusiness and their fertilisers, pesticides, weedicides and patented seeds.

Anyone who is aware of the Knowledge Initiative on Agriculture and the links with the Indo-US Nuclear Treaty will know who will be aware that those two projects form part of an overall plan to subjugate Indian agriculture to the needs of foreign corporations (see this article from 1999). As the biggest recipient of loans from the World Bank in the history of that institution, India is proving to be very compliant.

The destruction of livelihoods under the guise of ‘job creation’

According to the neoliberal ideologues, foreign investment is good for jobs and good for business. Just how many actually get created is another matter. What is overlooked, however, are the jobs that were lost in the first place to ‘open up’ sectors to foreign capital. For example, Cargill may set up a food or seed processing plant that employs a few hundred people, but what about the agricultural jobs that were deliberately eradicated in the first place or the village-level processors who were cynically put out of business so Cargill could gain a financially lucrative foothold?

The Indian economy is being opened-up through the concurrent displacement of a pre-existing (highly) productive system for the benefit of foreign corporations. For farmers, the majority are not to be empowered but displaced from the land. Farming is being made financially non-viable for small farmers, seeds are to be privatised as intellectual property rights are redefined, land is to be acquired and an industrialised, foreign corporate-controlled food production, processing and retail system is to be implemented.

The long-term plan is to continue to starve agriculture of investment and have an urbanised India with a fraction of the population left in farming working on contracts for large suppliers and Wal-Mart-type supermarkets that offer highly processed, denutrified, genetically altered food contaminated with chemicals and grown in increasingly degraded soils according to an unsustainable model of agriculture that is less climate/drought resistant, less diverse and unable to achieve food security. This would be disastrous for farmers, public health and local livelihoods.

Low input, sustainable models of food production and notions of independence and local or regional self-reliance do not provide opportunities to global agribusiness or international funds to exploit markets, sell their products and cash in on APCO’s vision of a trillion-dollar corporate hijack; moreover, they have little in common with Bill Gates/USAID’s vision for an Africa dominated by global agribusiness.

And, finally, to demonetisation

Modi rode to power on a nationalist platform and talks about various ‘nation-building’ initiatives, not least the ‘make in India’ campaign. But he is not the only key figure in the story of India’s capitulation to Washington’s agenda for India. There is, for instance, Avrind Subramanian, the chief economic advisor to the government, and Raghuram Rajan who was until recently Governor of the Reserve Bank of India. He was chief economist at the International Monetary Fund from 2003 to 2007 and was a Distinguished Service Professor of Finance at the University of Chicago Booth School of Business from 1991 to 2013. He is now back at the University of Chicago.

Aside from Rajan acting as a mouthpiece for Washington’s strategy to recast agriculture in a corporate image and get people out of agriculture in India, in a recent article, economist Norbert Haring implicates Rajan in the demonestisation policy. He indicates that the policy was carried out on behalf of USAID, MasterCard, Visa and the people behind eBay and Citi, among others, with support from the Gates Foundation and the Ford Foundation.

Haring calls Rajan the Reserve Bank of India’s “IMF-Chicago boy” and based on his employment record, memberships (not least of the elite Group of Thirty which includes heads of central, investment and commercial banks) and links, place him squarely at the centre of Washington’s financial cabal.

Haring says that Raghuram Rajan has good reason to expect to climb further to the highest rungs in international finance and thus play bow to Washington’s game plan:

“He already was a President of the American Finance Association and inaugural recipient of its Fisher-Black-Prize in financial research. He won the handsomely endowed prizes of Infosys for economic research and of Deutsche Bank for financial economics as well as the Financial Times/Goldman Sachs Prize for best economics book. He was declared Indian of the year by NASSCOM and Central Banker of the year by Euromoney and by The Banker. He is considered a possible successor of Christine Lagard at the helm of the IMF, but can certainly also expect to be considered for other top jobs in international finance.”

The move towards a cashless society would secure a further degree of control over India by the institutions who are pushing for it. Securing payments that accrue from each digital transaction would of course be very financially lucrative for them. These institutions are therefore pursuing a global ‘war on cash’.

Small, wealthy countries like Denmark and Sweden can bear the impact of a transition to a cashless economy, but for a country such as India, which runs on cash, the outcomes so far have been catastrophic for hundreds of millions of people, especially those who don’t have a bank account (almost half the population) or do not even have easy access to a bank.

But, regardless of the large-scale human suffering imposed as a result of demonetisation, it could kill two birds with one stone: 1) securing the interests of international capital, including the eventual displacement of the informal (i.e. self-organised) economy; and 2) acting as another deliberate nail in the coffin of Indian farmers, driving even more of them out of the sector. The US’s game plan remains well and truly on course.

Not really a case of ‘make in India’. Some 50 years after independence, as a state India remains compromised, weak and hobbled. More a case of made in Washington.