Ahed Tamimi And The Pathology Of The Israeli Mind

The trial of Ahed Tamimi—the sixteen year old Palestinian girl who slapped a fully-armed Israeli soldier who was standing in her front yard looking for Palestinian demonstrators to shoot—is supposed to reconvene in a few days. Israeli military courts have a 100% conviction rate, even of children. Ahed is one of several Palestinian youth who have become symbolic throughout the world for the 70-year old Palestinian struggle to regain and retain their own land and their basic rights as human beings. She has already been in prison for three months for attempting to protect her home and family from Israeli soldier-intruders. Her mother Nariman, who went to visit Ahed the day after she was taken to prison, was arrested upon her arrival and has also spent the last three months in jail.

I traveled to Ahed’s village of Nabi Saleh a week ago, to learn more about problems confronting the village as Israelis appropriate their fields and water supplies for an ever-growing illegal (according to the United Nations) Israeli settlement nearby, and in hopes of meeting Ahed’s father Bassem and her cousin Janna Jihad Ayyad. Upon arrival no one was home so I took a seat on the front porch. Soon various people were coming and going, and one of them told me Bassem was away, but that Janna was around. We phoned her and she showed up a few minutes later.

Janna is a precocious eleven year-old who speaks English fluently and has been filming and reporting on the abuses of her people by the Israelis since she was seven. The deaths of two men in her village—her cousin, Mustafa Tamimi, and another uncle, Rushdie Tamimi—served as a trigger for her to begin documenting what was happening in Nabi Saleh. Mustafa was killed by an Israeli gas canister and Rushdie was fatally shot in his groin.

She has risked her own safety many times to document Israeli behavior in Palestine, which over the last 70 years includes driving a million Palestinians off of their land and from their homes, and appropriating for themselves the vast majority of what prior to 1947-48 had been the Palestinian homeland. To some degree she has an advantage over adult reporters, because as she puts it,

“The soldiers catch the big journalists and take their cameras….The camera is stronger than the gun. I can send my message to many people, and they can send it to others.”

At this point she has a Facebook page with 280,000 followers and her own Youtube channel, well worth visiting. Children in Palestine are forced to grow up early and fast. Janna’s uncle Bilal explained,

On the day I visited our conversation took a different direction. After briefly talking about life under occupation and how much she missed her best friend Ahed, I showed her a book I had brought with me, Wildflowers of the Mediterranean. She was quickly transformed from a serious journalist reporting on the disaster that has befallen her people into an animated, enthusiastic student of the natural world. She dashed around Ahed’s yard, bringing in the many spring blooms, searching in the book for the ones she did not recognize, and pointing out the ones she already knew. 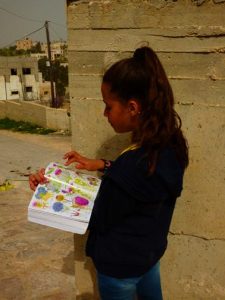 At one point she stood in the very spot in the entryway to the Tamimi household (see image on the right) where Ahed had confronted the Israeli soldiers three months before. Where Ahed had found young Israeli men armed with machine guns bent of perpetuating violence against Palestinians on Palestinian land, Janna was for that moment immersed in the beauty of the good earth. The contrast could not have been more stark. Foreigners arriving with guns and bombs are resisted. Arriving with peaceful intentions one is met with a cup of tea.

I spent two hours with Janna, wandering the hills above the village, identifying flowers and enjoying the impressive limestone geology. The ground everywhere is littered with tear gas canisters, spent concussion grenades and smoke bombs. The Israelis have been harassing the people of Nabi Saleh for 70 years, plenty of time for the spent ammunition to form windrows among the fields of flowers.

The cruelty exhibited by the Israelis in their hungering to imprison the young Ahed Tamimi, whose only wish was to protect her people and her home from intruders and whose only weapon was a mere slap—the inherent cruelty of those hungering to put her in a prison cell for years, or even forever, with some government officials calling for rape and further darker abuse—this display of pathological cruelty by an entire society has people throughout the world wondering what curse has befallen the people of Israel.

One possible answer is that they are obsessed with the hallucination that they are somehow a ‘chosen people,’ that they are somehow better than the rest of humanity, even that they are the preferred favorites of some mythological god. As prime minister Menachem Begin exulted after the Zionist slaughter of Palestinians at the village of Deir Yassin prior to the 1948 war, “God, God, Thou has chosen us for conquest.” According to the Israel Democracy Institute, approximately two thirds of Israeli Jews believe that Jews are the “chosen people”.

This sense of superiority over others is in fact a common human trait, mixed though it always is with a countervailing feeling of inferiority and fear. Albert Einstein in the wisdom of his old age addressed this pathology when he observed,

“A human being experiences himself, his thoughts and feelings as something separate from the rest, a kind of optical delusion of his consciousness. The delusion is a kind of prison for us, restricting us to our personal desires and to affection for a few persons nearest to us.”

The obvious deeper truth made clear in our time through scientific inquiry is that all humans have the same long, deep and difficult history. All humans evolved together in Africa for 200,000 years before any left that continent. All human beings share 99.9% the exact same genetic code and 99.9% the same long, traumatic evolutionary journey.

The human family faces pressing ecological challenges at this particular locus along the course of our Big History, shared by all people, such as, for example, overshoot of the human population and diminution of the richness, beauty and diversity life on earth. None of our challenges are mitigated or even addressed by the mythologies spun by the human mind over the course of our our short-term, 3000-year Little History. Those working for a viable future for all of people and for the biosphere as a whole look forward to the Zionists and the Jews and all Israelis maturing out of their mythological hallucination of separateness and rejoining the family of humanity and the community of life on the journey towards a viable future.