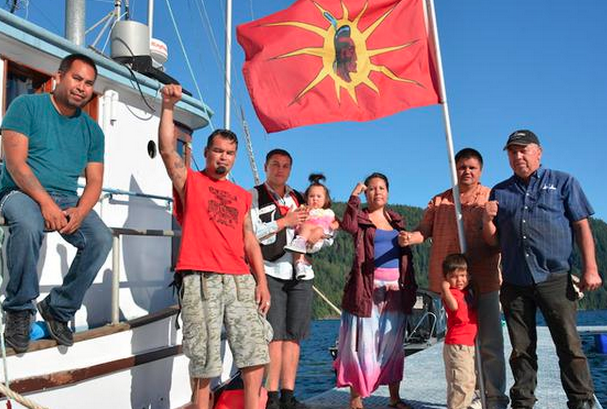 Members of a Vancouver Island First Nation are vowing to risk arrest rather than allow an international fish farming company to anchor an open-net salmon farm north of Tofino.

The Ahousaht First Nation say they set up a boat blockade Wednesday at the site of the new farm, owned by Norwegian-based Cermaq.

The First Nation believes the applications signal a new round of fish farm expansion on the West Coast, with the Ahousaht Fish Farm Committee predicting a four-fold increase in the industry over the next 15 years.

Protesters oppose any new fish farms in the area.

They fear possible diseases bred in fish within the open nets could be passed to clam beds or wild salmon travelling to and from nearby spawning rivers.

When the Province of British Columbia recently issued the biggest salmon farm expansion in over a decade, they knew the public were not onboard with the decision.  A petition with over 110,000 signatures was recently delivered to the Premier.

However, the Norwegian-based companies each courted a First Nation chief and council and once they made their deals, the Province of BC felt it would be clear sailing to grant leases, despite the public demand that this industry get away from our wild fish.  Four more salmon farms were given tenures to release tons of waste daily.

We can’t know what kind of deal was made with each of the three Nations involved, but what we are seeing now is the failure of this scheme.  Governments can’t ignore the people forever.

On September 9, 2015 five members of the Ahousaht Nation stepped onto one of the new salmon farms that Cermaq was busily anchoring in their territory.  The men asked the fish farm crew to leave and declared they would stay until the farm is removed with no replacement tenure.The site is called Yaakswiis. It is a bay on Flores Island in Clayoquot Sound and it lies just south of the Atleo River.  The Atleo was once a highly productive river for all six species of salmon, and trout and has long been utilized by the Ahousaht Nation. There is already a salmon farm just north of the Atleo,

placing a second salmon farm just south of the mouth of this river, is going to seal its fate.  Juvenile salmon leaving the Atleo River are not going to survive.  Attempts to restore the river have been unsuccessful.

This occupation of the Cermaq salmon farm at Yaakswiis is not the first time this has happened.  In the early 1990s, Gwawaneuk Chief Charlie Williams near Kingcome Inlet stepped onto a salmon farm and demanded that it release its moorings from an island that is an ancient burial ground. The farm was removed and a restraining order placed on Chief Williams.  Since then there have been many First Nation led protests around salmon farms – to no avail. (Read more here)

I stand with the Ahousaht.

While this is an entire Ahousaht driven action, Tofino environmental group Clayoquot Action is playing a support role. Funds are needed for access to this remote locationhttp://clayoquotaction.org/

In response to the letter from the Ahousaht Hawiih, and

Cermaq; we the Ahousaht Muuschim and supporters have commenced this action to put a stop to the proposed Yaakswiis fish farm site due to the fact that there was no prior informed consent or consensus amongst the whole of the Ahousaht membership in terms of this new farm.

We are upholding with the utmost respect and safety the responsibility of caretaking our lands and waters and keeping it safe from environmental damage that may be irreversible and detrimental to not only our wild salmon stocks but also to all aquatic life in the surrounding vicinity. We have grave concerns with the location picked for this farm as it was clear from prior consultation with the community that this location was off the table by request of the people. The decision of the MHSS, and Hawiih to move forward with a new fish farm is a grave error.

The fish farm is right where there is salmon, and herring run,

and ground fish breeding grounds; not to mention there is many other marine life that will have negative impacts from the pollution and disease that go hand in hand in with fish farms. We question the supposed safety of any fish farms, open pen fish farms are not only unnatural but have impacts that can adversely affect the ocean for decades. The risk of any more farms in our waters is not worth any monetary gain, we are concerned with the future and keeping our wild salmon stocks healthy and strong.

We need three things before we leave this site and end our peaceful occupation:

We want copies of the protocols the new and old that have been signed by Hawiih and Band Council and they must be made available to all muuschim at the meeting on Monday, we also would like to change the time of the meeting to 5 pm as to be inclusive of those who work during the day and want to be in attendance.

We want assurance in writing from the Hawiih, Band Council, and Cermaq that this farm location at Yaakswiis is off the table for time immemorial and will be protected from any and all forms of resource extraction as it is a key location for our aquaculture and that there is a moratorium on any new farms until the people can make informed decisions on whether to allow fish farms to continue to operate in Clayoquot Sound or not.

We want to know how much money was on the table for this signing, where this money is ear marked to go and where has all the monies received from the fish farm industry to Ahousaht and MHSS since the relationship has been entered has gone.

It is our sincere and humble wish that our Hawiih, Chief and Council, and MHSS would stand with us on this matter. It is our sincere wish that our own leadership would remember their role is to be an advocate for the people not corporations, and that you are all transparent on all resource extraction in our Ahousaht Territories. The responsibility of Hawiih, Chief and Council, and MHSS should place the needs of the people above the needs of the companies that only wish to use our lands and waters for profit. Remember that you speak and represent the people not the companies or Canada’s interests.

In honour of the difficult stand by Ahousaht people for the life of this coast.