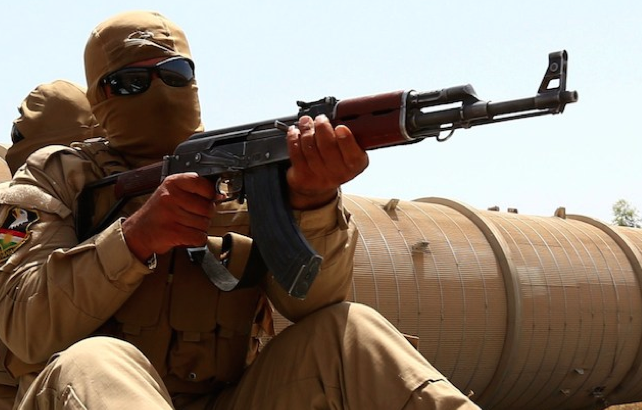 Note: Two articles below make the point that the US air strikes are primarily about protecting the US friendly undeclared Kurdish Oil State.

The U.S. Airstrikes in Northern Iraq Are All About Oil

By John B. Judis

Last night, President Barack Obama announced that he was authorizing American airtstrikes in Iraq. He described his intervention as a “humanitarian effort to help save thousands of Iraqi civilians who are trapped on a mountain” and as an effort “to protect our American personnel.” One word that he didn’t mention is “oil,” but it lies near the center of American motives for intervention.

The United States is conducting airdrops to aid the Yazidis who have fled the advance of Islamic State militants, but it is conducting airstrikes around Erbil, which is to the east. There are American consular personnel in Erbil, but they could be evacuated if necessary. What Obama left unsaid was that Erbil, a city of 1.5 million, is the capital of the Kurdish regional government and the administrative center of its oil industry, which accounts for about a quarter of Iraq’s oil. The Kurds claim that if they were to become an independent state, they would have the ninth-largest oil reserves in the world. And oil wells are near Erbil.

If the Islamic State were to take over Erbil, they would endanger Iraq’s oil production and, by extension, global access to oil. Prices would surge at a time when Europe, which buys oil from Iraq, has still not escaped the global recession. Oil prices have already risen in response to the Islamic State’s threat to Erbil, and on Thursday, American oil companies Chevron and Exxon Mobile began evacuating their personnel from Kurdistan. But oil traders are predicting that American intervention could halt the rise. “In essence we find U.S. air strikes more bearish than bullish for oil as the act finally draws a line for IS and reinforces both the stability in south Iraq and in Kurdistan,” Oliver Jakob, a Swiss oil analyst, told Reuters.

In portraying American intervention in Iraq as a purely humanitarian effort, Obama is following the script he read from in Libya, when he justified American intervention as an effort to prevent a massacre in Benghazi. In a March 28, 2011 address to the nation, Obama painted the American intervention as a response to “brutal repression and a looming humanitarian crisis.” Oil was not mentioned, even though Libya was the world’s sixteenth-largest oil producer in 2009 and a major supplier to Europe. But oil was most likely involved, as became clear when, after preventing a massacre in Benghazi, the United States and its coalition partners stuck around to topple the regime of Muammar Qaddafi. If the Obama administration wanted to prevent the world’s peoples from brutal dictators and repressive regimes or from takeovers by terrorist groups, there are other countries besides Libya and Iraq where it could intervene. What distinguishes these two countries is that they are major oil producers.

The United States should worry about the global oil supply. It is important for global economic and political stability. And having a significant chunk of it fall into the hands of a group like the Islamic State should certainly be a concern. But if Obama is worried about the world’s oil supply, then he should say so forthrightly and not leave himself in a position where he will be unable to justify or explain further intervention after the airdrops to the Yazidis are completed. And the administration should also have a plan for making sure that in sending out the Air Force, it will actually end a dire threat to Iraq’s oil production and put Iraq back on its feet. In Libya, the U.S. and its partners succeeded in getting rid of Muammar Qaddafi, but not in resolving the country’s humanitarian crisis or in keeping its oil flowing. Oil production has plummeted as Libya has been plunged into anarchy after Qaddafi’s fall. The challenge in Erbil and Iraq is even more daunting.

Oil a key motive for U.S. air strikes in Iraq

This week’s U.S. air strikes in northern Iraq are being accompanied with an undertow of “it’s all about oil” talk.

Take for example, Columbia School of Journalism Dean Steve Coll’s observation in the New Yorker, that “Obama’s defense of Erbil (capital of the semiautonomous Kurdish region) is effectively the defense of an undeclared Kurdish oil state.”

It’s no secret that Iraqi Kurdistan has an abundance of oil reserves, nor that U.S. oil companies, like San Ramon’s Chevron Corp., are busy exploring there. Chevron has three “production sharing contracts” with the Kurdish government, covering a combined 444,000 acres, north of Irbil, where it’s in the early testing and drilling stage. And it likes what it sees.

“We are very encouraged with the initial results in the Kurdistan region of Iraq,” the company said in its earnings call two weeks ago. “Exploratory drilling and logging has indicated multiple pay zones in a large structure … the formations have demonstrated the ability to deliver high liquid flow rates.”

Days after the earnings call, the extremist Islamic State, which had been swallowing swathes of Iraqi territory to the south, were suddenly close to the gates of Irbil. Chevron and other energy multinationals, which had been well out of harm’s way, began evacuating personnel.

Asked for an update, a Chevron spokesman said Monday, “We continue monitoring the situation. We remain in regular contact with the Kurdistan Regional Government and are dedicated to supporting the (Kurdistan Region of Iraq) in developing its natural resources.”

“Could it affect operations? Civil wars always do,” said Amy Myers Jaffe, a global energy policy expert at UC Davis. “But the level of danger appears reduced, now the U.S. is engaged, hopefully.”

Oil traders agree. “In essence we find U.S. air strikes more bearish than bullish for oil (prices) as the act finally draws a line for IS (Islamic State) and reinforces both the stability in south Iraq and in Kurdistan,” Oliver Jakob, a Swiss oil analyst, told Reuters.

So, sure – setting aside for the moment that without U.S. intervention, the Yazidi minority group would be worse than they already are – much of this is about oil. Iraq, north and south, has enormous quantities of it. And – sorry – the world will depend on oil to help fill its energy needs far into the future.

Ironically, for Chevron, it would not be the end of the world if Kurdistan was forced offline. “It could be a very profitable place, but it’s small for Chevron,” said Jaffe, referring to the company’s much larger oil holdings in Venezuela and the Saudi Arabia-Kuwait neutral zone, and natural gas in Australia.

A potentially bigger worry for both Chevron and the Kurds, she said, could be if Iraq did stabilize and unite, with Kurdistan under its umbrella. “It could be a problem for Kurds who saw the rest of Iraq as a failed state, and have had freedom of movement for its oil.”

For Chevron, she added, a new arrangement in Iraq could entail the renegotiation of contracts it has with the Kurds, which by the way, Baghdad refused to recognize. “A federal government might want to revisit its export policy,” she said.