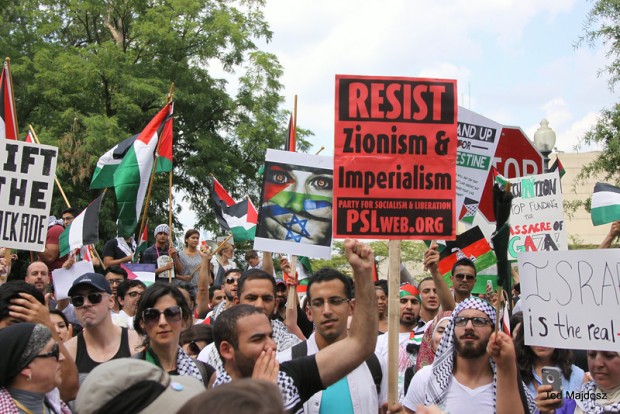 Days of Protest Continue At Israeli Embassy In Washington, DC

Hundreds of peace activists assembled at the Israeli embassy in Washington, DC on Friday in protest of Israeli Defense Force (IDF) air strikes on Gaza. Protestors from groups including Code Pink Women for Peace, Answer Coalition, Emma’s Revolution, and Students for Justice in Palestine displayed banners and signs and banged pots, pans and drums in defiance of a new war waged on Palestine. Embassy entrance gates were closed and security was heavy.

Police had set up barricades across from the Embassy to corral the protestors. According to DC Indy Media, Secret Service detained one independent journalist for standing on the sidewalk on the Embassy side. Since it is not illegal to stand on a public sidewalk, however, police had no cause for arrest.

Anti-war protestors organized rallies at Israeli embassies in major European cities as well, including London, Paris, Athens, and Rome. By Saturday there were solidarity protests in cities around the world.

Thousands rallied at Union Square in New York on Thursday and again on Friday to protest the bombing of Gaza.

The attacks on Gaza were spurred by recent kidnappings and murder of three Israeli youth and a revenge kidnapping and gasoline immolation of a sixteen-year-old Palestinian boy. Mohammed Abu Khdeir was grabbed by an Israeli lynch mob in Jerusalem and later found unrecognizable. The videotaped police beating of his Palestinian-American teenage cousin Tarek Abu Khdeir also drew violent reactions. Rioting broke out and tensions quickly rose across Jerusalem as news spread of the kidnappings. Assaults and acts of retribution escalated across the occupied territories as IDF forces moved in to quell violence.

Missile attacks from Gaza on Israeli metro centers were met with an intense IDF missile and air assault, including drones and F-16s.

The renewed conflict was the result of the collapsed peace talks between Hamas and Israeli government. By Friday night, over 123 people were killed in Gaza and 800 wounded.