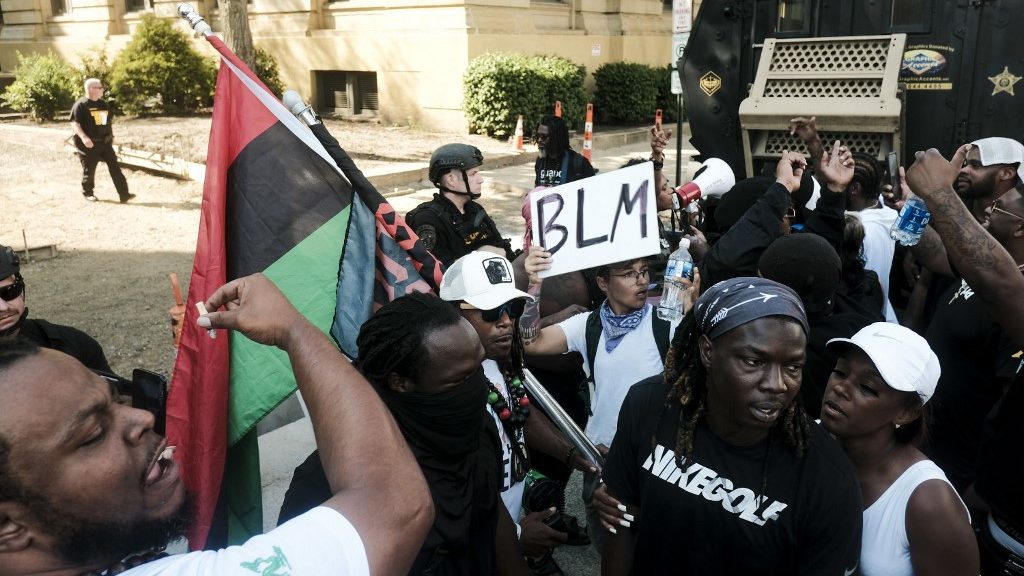 High profile family members of other law-enforcement victims have been arrested and charged for participation in mass demonstrations demanding justice.

Protests have continued in Akron, Ohio after the June 27 police killing of Jayland Walker, 25, who had 90 bullets fired at him by officers, 60 of those rounds struck the victim.

After the release of a police video of the shooting of Walker, who was unarmed, people poured into the streets to demand justice for the African American motorist.

Police claimed that Walker had fired at them during a chase, however, he was not carrying any firearm when he was struck down in the hail of bullets fired by Akron police. The police later claimed they discovered a handgun in Walker’s vehicle after he had already been executed.

This incident represents a continuation of police violence directed towards African Americans across the United States. More than two years since the brutal police killings of Breonna Taylor in Louisville and George Floyd in Minneapolis along with the lynching of Ahmaud Arbery by vigilantes in Brunswick, Georgia, the various law-enforcement agencies have been given even more resources by the federal government to carry out their brutal treatment of Black and People of Color Communities.

In fact, Democratic President Joe Biden has repudiated the demand which grew out of the mass demonstrations of 2020 to defund the police. Biden went out of his way during his State of the Union Address earlier in the year to call for more resources being turned over to the police. Substantial amounts of funds which were ostensibly allocated by the U.S. Congress to address the socioeconomic crisis stemming from the COVID-19 pandemic, have been turned over to law-enforcement departments around the country.

Akron is a city of 197,000 people, the fifth largest municipality in the state of Ohio within a broader metropolitan area with a population of 703,000, which also encompasses Cleveland and Canton. Once known as the rubber capital of the world due to the role of Goodyear Tire & Rubber Company, since 1960, Akron as a municipality has lost approximately 100,000 residents. 31.5% of the people living in Akron are African Americans.

During the Independence Day weekend, Akron erupted in mass demonstrations and rebellion where several businesses reported property damages. It was reported by local police that 49 people were arrested on July 3-4 and charged with rioting. These developments prompted the Mayor Dan Horrigan to declare a state of emergency in Akron.

The Akron Beacon Journal reported on the events saying: “After Mayor Dan Horrigan and Police Chief Steve Mylett gave a 1 p.m. press conference Sunday (July 3) to discuss the video the city released of Walker’s death, hundreds of people gathered outside Quaker Station on Broadway downtown for an Akron NAACP Community Peace Rally. A large crowd rallied at the Harold K. Stubbs Justice Center downtown at around 10 p.m. As chants demanding justice for Walker continued, some began hurling water bottles and other objects at the building. Despite organizers calling for peace and expelling one person who had pulled down a street sign, the situation grew more hectic as police shot tear gas canisters into crowds of protesters. Protesters fled, while some launched smoke bombs into the streets. One protester began using a bat to break windows of snowplow trucks the city had used to block traffic in front of the Justice Center. On South Main Street windows were smashed and planters overturned. Downtown Akron Partnership President and CEO Suzie Graham said there was damage at 19 properties, with an estimated count of 101 broken doors and windows, as well as a broken pane of glass in a bus shelter.”

The unrest in Akron has been downplayed in the national media in the U.S. There was the reporting of the brutal execution of Jayland Walker, yet there has been almost no follow-up on the subsequent demonstrations and arrests. However, other issues have dominated the corporate and government-controlled television, newspaper and radio networks.

Much attention is being paid to the January 6 hearings in the Congress. In addition, a series of mass shootings has shifted the focus to the question of gun control. Not to mention the incessant reporting on the Ukraine war where the actual battlefield events are often characterized in Cold War propaganda terms.

Despite the failure of the White House to make a statement decrying the police killing of Jayland Walker, there are those who continue to advocate for an electoral strategy aimed at putting more Democrats in the House of Representative and the Senate. Nonetheless, there is tremendous discontent among the Democratic Party’s electoral base with specific reference to African Americans. This is potentially a serious problem for the Democratic-dominated House and evenly divided Senate.

Family members and supporters of victims of police brutality converged on Akron to express their solidarity with their counterparts in this Ohio city. Jacob Blake, Jr. was severely wounded by Kenosha, Wisconsin police in 2020, being shot seven times while moving away from the police to enter a vehicle. Blake’s father, already suffering from chronic health issues, stepped< forward to demand justice for his son. The prosecutorial authorities in Wisconsin failed to indict the police officers involved in this heinous act of law-enforcement misconduct.

In addition, the family of Breonna Taylor, George Floyd and Hakim Littleton of Detroit, demanded in public and courtroom settings that the police officers responsible for the death of their loved ones. The response by the courts have been mixed. The murderers of George Floyd were indicted and convicted in state and federal courts. However, no punishment was meted out to the killers of Breonna Taylor and Hakim Littleton.

The activism of the families of police victims has been highlighted in Akron. One report emphasized: “The aunt of Breonna Taylor, who was killed in a botched police raid, and the father of Jacob Blake, another African American permanently paralyzed after getting shot by Kenosha cops, were arrested this week while protesting against police brutality in Akron, Ohio. Bianca Austin and Jacob Blake Sr. traveled together with Families United, a group against police brutality, to protest against the harrowing shooting of unarmed Jayland Walker. Amid the chaotic protest Wednesday night, Austin was arrested and Blake Sr. was transported to a local hospital. Police booked Austin at the local jail on charges of alleged rioting, disorderly conduct, and failure to disperse, while a bench warrant was issued to arrest Blake Sr.”

This type of conduct by the Akron police indicates clearly that they are more concerned with covering up for those officers under investigation in the brutal death of Walker. The same pattern has been repeated in municipalities, suburbs and rural areas throughout the U.S.

An attempt to pass the George Floyd Justice in Policing Act during 2021 failed in the Senate where even some Democrats would not support any significant reforms related to holding the police accountable for their deadly behaviors. The failure of legislation promised by the Biden administration encompasses a wide array of issues.

There was the inability to codify within legislative action the right of women to reproductive freedom in light of the overturn by the Supreme Court of the Roe v. Wade decision of 1973. Today there are questions about whether individual states can investigate and prosecute women for seeking abortion care in states other than where they live.

Moreover, the abortion ban raises questions about the potential future actions of the conservative-dominated court. The 14th amendment to the Constitution purportedly guarantees equal protection under the law, privacy and the right to legal due process. Nevertheless, five justices on the Supreme Court were empowered to make a decision which most people in the U.S. do not support that effectively disregards the rights of at least half of the population.

These decisions call for independent action on the part of African Americans, Latin Americans, all oppressed nations and communities, including women of all nationalities, to gather together in order to ensure that the rights of peoples be protected and enshrined in the law. Until this attitude is adopted among the hundreds of millions of those negatively impacted by right-wing legislation and intrusions into the collective will of the people, the ruling class will continue its program to rob the masses of their inherent rights as human beings.