Alabama Prisons Are On Strike

Above photo: From AL.com.

Occupied Muscogee Creek / Cherokee / Yuchi / Choctaw / Shawnee / Chickasaw land – As of Jan. 1, 2021, incarcerated workers in Alabama’s odious prison system are on strike!  Led by the Free Alabama Movement, incarcerated workers throughout the state of Alabama have put down their work tools and refused to go to work from now until Jan. 31.

The inhumane conditions of Alabama Department of Corrections, their negligence around COVID-19, and their implementation of video visitation equipment in prisons that ADOC claims is “due to COVID,” but is really a front for eliminating in-person visitation, has contributed further to the psychological warfare against everyone incarcerated in Alabama prisons and has fueled this strike.

Officially called the “30 Day Economic Blackout,” the strike was called to order in a powerful statement via video from Free Alabama Movement co-founder Kinetik Justice, who states that this economic blackout is the culmination of six years of reports on the inhumane conditions inside the walls of Alabama prisons by the Free Alabama Movement, and the subsequent foot-dragging of the government to do hardly anything about it. At the core, the ones suffering the most inside Alabama prisons are Black men. 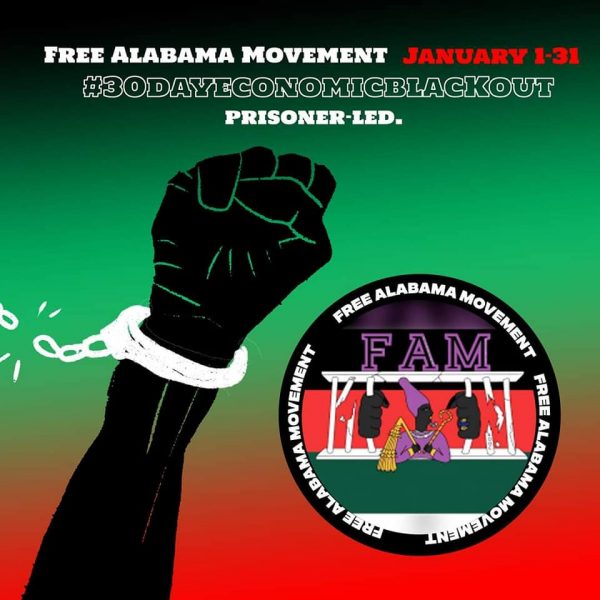 A groundbreaking report from Alabama Appleseed Center for Law & Justice entitled “Death Traps” (https://bit.ly/34SrShU) reveals that Black men are at the highest risk for violence inside Alabama prisons. Out of 48 homicides in Alabama prisons between June 2014 and September 2020, 37 were Black men. They are also 3.3 times more likely than their white counterparts to be murdered within the walls of Alabama prisons.

The Free Alabama Movement, founded and operated by Black men behind the walls, has sought to bring this knowledge to the public, which is one of the main reasons behind the prison strike. Their lives are on the line; this is a matter of life and death for them.

Twice in the last 18 months, the conditions inside ADOC prisons have been revealed to be so shocking that the Department of Justice ruled that the entire Alabama prison system is “unconstitutional under the Eighth Amendment.” Video footage from within the prisons shows deplorable living conditions, overcrowded cells, violence between inmates and excessive force from guards, and many other factors in violation of the Eighth Amendment. On Dec. 9, 2020, the DOJ filed a lawsuit against ADOC over these inhumane conditions, citing understaffing and ongoing violence as two major factors in the lawsuit. (https://abcn.ws/2KMzhZ7)

AP reporter Kim Chandler writes: “Alabama had been in negotiations with the Justice Department since the first 2019 report in the hopes of staving off a lawsuit, but federal officials said the state has ‘failed or refused to correct’ the unconstitutional conditions.

“The 24-page lawsuit said that conditions in Alabama prisons have gotten worse since the initial findings — with homicides increasing and prisons becoming even more overcrowded than in 2016 when the investigation was initiated. ‘The State of Alabama is deliberately indifferent to the serious and systematic constitutional problems present in Alabama’s prisons for men,’ the lawsuit states.” (Dec. 10, 2020)

In a disgusting, careless response, Alabama governor Kay Ivey has vowed to have three Alabama mega-prisons constructed over the next several years, costing Alabama taxpayers more than two and a half billion dollars! Two of the prisons, slated to be built in Brierfield and Tallassee, Ala., have been met with fervent local resistance by residents who do not want a prison in their communities or neighborhoods. (https://bit.ly/34Ri3AW)

Another core of this revolutionary strike is to protest the implementation of video visitation equipment in prisons across Alabama. This equipment, designed by Securus Technologies, has been touted as “a safer alternative to in-person visits during COVID-19,” but there are no guarantees that this equipment would be removed and in-person visits resumed once COVID-19 rates begin to drop.

Many prison abolition advocates in the Free Alabama Movement say that this is a long-conceived plan from ADOC to eliminate in-person visitation altogether, as a form of psychological warfare on those incarcerated workers behind the wall. When incarcerated workers have to deal with cell overcrowding, violence, and heinous living conditions, in-person visitation is for many a brief reprieve from the sickening situations they are in. But the state of Alabama, hoping to break them mentally and emotionally, is seeking to do away with even this small reprieve.

Psychological warfare is not the only reason behind this. Follow the money! Securus Technologies rakes in over $1,750,000,000 a year from this equipment installed in prisons. It currently has 6,000 contracts out with prisons across the U.S. (https://bit.ly/3psMq8z) While Securus profits, the ADOC can cut costs and make more money for its prison-industrial complex. 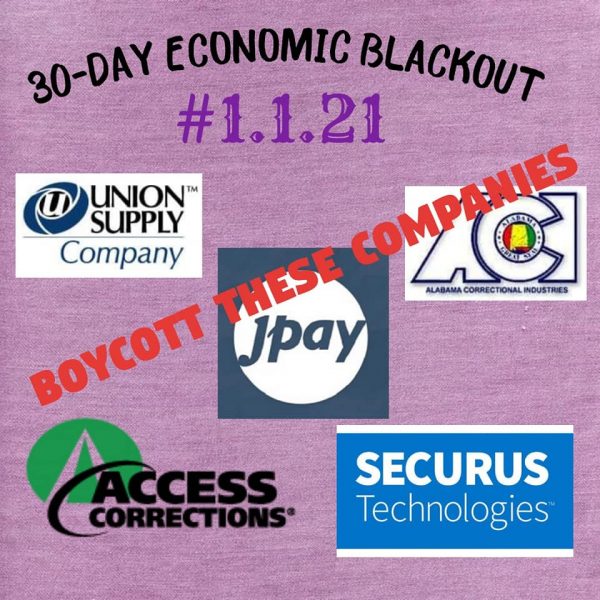 Support the strike! Abolish the prisons!

Although the ADOC has been ruled the “deadliest prison system in the country,” it is important to note that all prisons are inherently deadly, inhumane, and cruel – a massive monument to capitalism-imperialism, colonialism, and slavery. In a Dec. 10 interview, Free Alabama Movement co-founder and abolitionist Swift Justice said: “I personally wouldn’t sit there and try to gauge how inhumane one prison is over another prison in the United States. Any prison that has any human rights violations is inhumane; it’s all equal in our eyes. The issue here in Alabama is that for so long society in Alabama — they just cherish the fact that individuals come to prison and are basically tortured and treated like animals.” (https://bit.ly/3aWcll7).

In the coming month this strike, led by Black incarcerated workers behind the walls of Alabama prisons, will be the revolutionary boost that kicks off 2021.  Halfway through the strike, Joe Biden will be inaugurated as president, but has announced no plans to even address prison reforms. His victory, seen as “revolutionary” by bourgeois liberals, will be challenged at every turn.

The Alabama prison strike/30 Day Economic Blackout will kick off resistance to the decaying neoliberal, capitalist-imperialist system in the U.S. It is critical that progressives unequivocally support the Alabama prison strike, the Free Alabama Movement, and the continued struggle to tear down the walls and abolish prisons once and for all!

Devin Cole is a transgender Marxist organizer and writer. They are the president of Strive (Socialist Trans Initiative), a transgender advocacy organization in northwest Florida, and a member of the Workers World Party – Central Gulf Coast (Alabama, Florida, and Mississippi) branch.