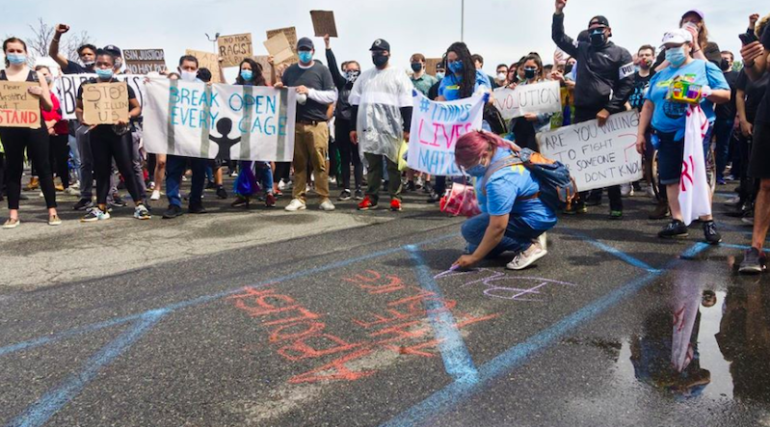 Albany Must Do More To Stop The Criminalization Of Our Communities

Above photo: Make the Road NY. ‘Our communities organized for years to make these victories possible, and we will continue to stand together against injustice.’

As Black, Brown, immigrant, and trans New Yorkers continue to take to the streets, it’s clear that the mass uprising taking place across the state, and indeed the country, is far from over. In New York, this movement moment has already helped produce real results for long-fought campaigns: we have already won major policy victories in the fight for police accountability, including the repeal of 50a (a police secrecy statute), the STAT Act (a data reporting bill), and special prosecutor legislation.

But the criminalization of our communities continues. With Albany legislators slated to return next week, they must take further action to keep community members with their loved ones, and youth in their schools—not in cages. Legislators can and should continue to make progress towards reversing the criminalization of our communities by passing the Protect Our Courts Act and the Solutions not Suspensions Act, and repealing the Walking While Trans Ban.

On June 12th, Black and Brown communities celebrated a landmark victory with the repeal of 50a, for which we had been fighting for years, and finally won in the legislature in the wake of the killing of George Floyd. The next day, Governor Cuomo said, “You don’t need to protest, you won. You accomplished your goal.” Wrong. While we won important progress in Albany, our demands go much further. Our communities organized for years to make these victories possible, and we will continue to stand together against injustice.

Black and Brown Trans women are still being locked up for the mere fact of existing in public and walking through their communities. Black and Brown youth are still being forced into the school-to-prison and -deportation pipeline by police in schools and punitive discipline. And, with ICE resuming its activities as COVID-19 declines, immigrants are at risk of being detained for going to court to access due process.

No wonder that, the day after Cuomo’s tone-deaf statement, as many as 15,000 community members marched to declare that “Black Trans Lives Matter.” Black Trans women continue to take action because they remain at grave risk of abusive policing and discrimination in many forms. One particular statute, known as the Walking While Trans Ban, makes “loitering for the purposes of prostitution” a crime. The law is applied as a catch-all to criminalize trans women of color—often just for standing outside their home, walking to the grocery store or walking with friends. Of those targeted, 90 percent of those charged are Black and Brown. It’s time to finally repeal the Walking While Trans Ban.

Finally, as COVID-19 has subsided in New York, immigrant communities are seeing a resurgence of immigration enforcement activity. All too often, Immigration and Customs Enforcement (ICE) have lurked at and around courthouses around the state to prey upon immigrants showing up for their court appearances. This has both terrorized immigrant community members trying to access the legal system and undermined due process across the state. While litigation has blocked the practice for now, legislators should take action to prohibit ICE from ever engaging in this dangerous practice again. A

The road to justice for Black, Brown, immigrant, and trans communities is long. We know that no single protest, or single piece of legislation, will ensure that we are treated with respect and dignity. But we will not stop demanding the end of the criminalization of our communities. And we expect our legislators and Governor Cuomo to hear us and continue passing legislation to help us get there.