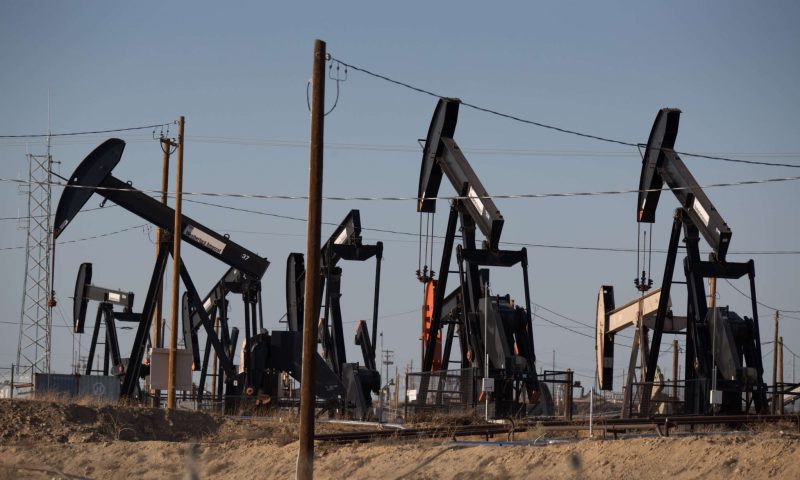 Above Photo: Oil pumpjacks line the horizon in Chevron’s Kern River Oil Field, one of the largest in the United States, located just north and east of Bakersfield, on July 7, 2021, in Oildale, California. George Rose / Getty Images.

As climate change accelerates and environmental disasters proliferate around the world, a Big Oil-funded business lobbying group has decided to attack financial firms that are taking their money out of fossil fuel companies, the Center for Media and Democracy (CMD) has learned.

This month at the annual States and Nation Policy Summit of the right-wing American Legislative Exchange Council (ALEC), a pay-to-play organization that brings together corporate lobbyists and mostly Republican state lawmakers to author model legislation, members of the group’s energy task force voted unanimously to approve a new model policy that would prevent financial companies that end investments in oil, gas, and coal companies from receiving state government contracts or managing state funds.

The bill, the Energy Discrimination Elimination Act, directs state treasurers or comptrollers to maintain a list of firms that boycott fossil fuels. Each government contract with a business that has more than 10 employees must include a verification that the company does not boycott fossil fuel businesses.

The act and its backers claim that fossil fuel divestment will hurt workers and state pension funds, yet it ignores the growing U.S. renewable energy industry and its lucrative stocks. The Department of Energy estimates that renewable energy will account for 80% of U.S. power generation by 2050. At the energy task force meeting today, ALEC staff suggested lawmakers frame the bill as protecting the economic interests of their states.

The model bill claims that “American and European fossil energy producers” are “among the most socially and environmentally responsible companies in the world.” ALEC has a history of climate change denial so extreme that Exxon, which had used ALEC to launder its climate change denial efforts, quit the business group in 2018. At its annual meeting this summer, ALEC members weighed in on several other model bills and resolutions aimed at protecting fossil fuel companies or opposing renewable initiatives.

“This proposed model bill…speaks mostly to the major impact that the fossil fuel divestment movement has made, with institutions and local governments worldwide divesting from fossil fuels to the tune of $1.5 trillion and counting,” Thanu Yakupitiyage, head of U.S. communications for 350.org, told CMD. “This bill cannot stop the reality that continued investments in fossil fuels are bad for communities and the planet. With less than eight years to turn around the worst impacts of the climate crisis, this bill is a desperate attempt by fossil fuel companies and their lobbyists to maintain their profits.”

The “energy discrimination” act is already law in oil-rich Texas, where the Koch-funded Texas Public Policy Foundation (TPPF) celebrated its passage. In an email obtained by CMD, Jason Isaac, a former state representative who directs TPPF’s pro-fossil fuels initiative, told participants in ALEC committee meetings that the energy bill was an “opportunity to push back against woke financial institutions that are colluding against American energy producers.” He described banks and investment firms that decide to divest from and deny loans to fossil fuel companies as using “politically motivated and discriminatory investing practices.”

But the bill is modeled after anti-BDS (the boycott, divestment, and sanctions movement critical of Israel’s treatment of Palestinians) legislation, promoted by ALEC and passed in some form in 33 states, that prohibits states from contracting with companies that boycott Israel. These bills may have violated free speech rights, as the U.S. Court of Appeals for the Eighth Circuit struck down Arkansas’ law, writing that the law was too broad and that supporting or opposing boycotts is constitutionally protected expressive activity.

“We have recently seen a concerted legislative attack on the right to boycott,” Nicholas Robinson, senior legal adviser at the International Center for Nonprofit Law, told CMD. “It should concern everyone who cares about free speech when a state government punishes those who engage in a boycott.”

In late November, 15 Republican state treasurers sent a letter to U.S. banks announcing that they will begin “collective action” against companies that boycott fossil fuels. The officials wrote that they aim to “select financial institutions that support a free market and are not engaged in harmful fossil fuel industry boycotts for our states’ financial services contracts.”