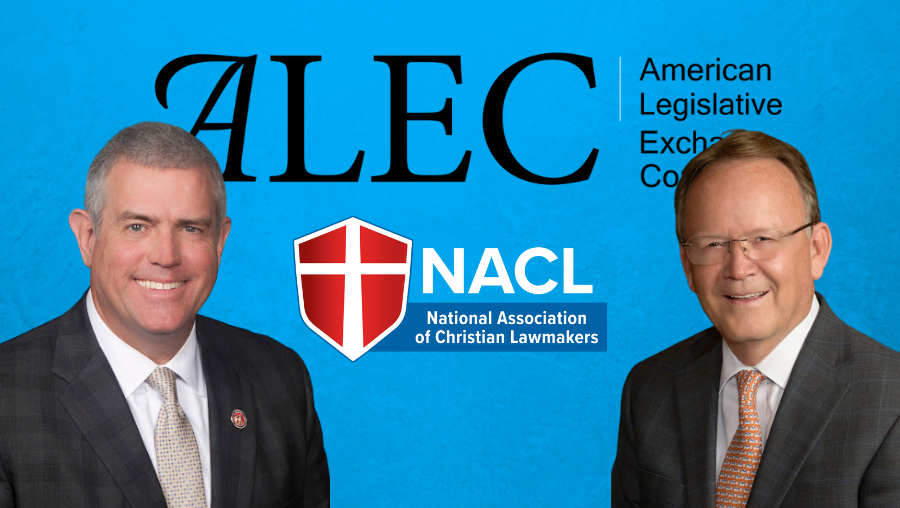 The American Legislative Exchange Council (ALEC), a pay-to-play network of conservative state lawmakers and business lobbyists that writes model legislation, claims that it no longer works on social policy. But videos of ALEC-led events, obtained by the Center for Media and Democracy (CMD), tell a very different story.

At the 40th anniversary meeting of the Council for National Policy (CNP) in May, ALEC leaders boasted about their extensive efforts to advance state legislation to severely restrict access to abortion and limit the rights of trans students, as well as voter suppression bills.

CNP is a secretive network of far-right Christian political figures and donors that works behind the scenes to influence Washington.

“We’ve had a history of working on other issues like gun rights and social issues and things like that, which has not ended well for ALEC,” said CEO Lisa Nelson at a “Saving American Through the States” action session at the group’s meeting. “Because of our intersection of business and legislators we kind of stick to the fiscal issues.”

However, right after saying that, Nelson explained how her organization is creating model “election reform” policies “through” the Honest Elections Project, a dark money voter suppression group tied to the influential Leonard Leo, CMD reported. Nelson states specifically that ALEC has “acted as a resource for legislators” and planned to develop a “model policy” with the Honest Elections Project at its July meeting.

Mississippi Speaker of the House Phillip Gunn and Utah State Senate President J. Stuart Adams then discussed their anti-abortion efforts. Adams is the current national chairman of ALEC, and Gunn was the most recent chairman. Adams and Gunn are both former ALEC chairs of their states.

Gunn touted Mississippi’s House Bill 1510 from the 2018 legislative session, which banned abortion after 15 weeks following a woman’s last menstrual cycle with no exceptions for victims of rape or incest. More than 500 public health scholars filed an amicus brief opposing the law that details the risks to children from unwanted pregnancies and to women in states with abortion restrictions.

The Supreme Court took up the case one week before the ALEC panel, and oral arguments are scheduled for December.

We think that’s going to be a landmark case. All of us know that the United State Supreme Court composition has changed. We believe, in a way, that is more pro-life. They say that Amy Coney Barrett is one of the most active, pro-life people in America, so we believe that she brings a new dynamic to that court. We think our case, our law that we passed in 2018, will be transformative in the arena in abortion. We’re proud of that.

Adams told the crowd that his Utah legislature “copied Mississippi’s anti-abortion bill and joined with them in their lawsuit,” presumably the Supreme Court case regarding the law.

The ALEC legislative leaders and Florida State Rep. Danny Perez, an ALEC board member who is in line to become the next Speaker of the House, discussed their anti-transgender legislation as well.

Perez talked about the successful anti-transgender sports bill in Florida, which bans trans girls and women from playing on public school sports teams according to their gender identity. Gov. Ron DeSantis signed the bill into law at a private Christian academy that is not subject to the law, on the first day of Gay Pride Month.

Gunn said that this year his state passed the same anti-trans law, which he called “the Fairness Doctrine.” While telling the crowd that his state hasn’t faced much pushback from the business community, Gunn said that if the NCAA were to act, “they’re committing discrimination against women.”

Adams chimed in about the anti-trans bill in Utah.

“We tried to do something similar to Florida and Mississippi,” he said. “It made it through the House, came to the Senate. We thought we had it done, but then there was pretty good backlash from the Jazz and other sports organizations…and it stalled in the Senate.”

‘ALEC From A Biblical Worldview’

From the audience, Arkansas State Sen. Jason Rapert (R), also an ALEC member, encouraged people to support the pay-to-play organization and described how the group has supported spin-off networks to directly deal with policies that ALEC purports not to work on.

“There’s a lot of great peer legislative organizations, and as you know we formed an entity that is specifically addressing the election integrity issues, the pro-life issues, as well as the other, you might say, hot-button issues,” said Rapert.

“We created the National Association of Christian Lawmakers [NACL], which is basically ALEC from a Biblical worldview,” he continued. “And so it allows us to deal with those issues that [Nelson] said is not the direct mission [of ALEC].”

The group adopted a “Model State Heartbeat Act” in July that bans abortion at the time of a detectable “fetal heartbeat,” or roughly six weeks after a woman’s last menstrual cycle. The term is “medically inaccurate,” however, because at that stage, an embryo does not have a developed heart, and the “beat” is actually electrical impulses. The sound one hears is generated by the ultrasound machine. The bill also uses the term “unborn child” to refer to an “embryo” beginning at fertilization.

The model bill was adapted from Texas’ extreme six-week abortion ban, which the Supreme Court refused to block on Sept. 1, allowing the nation’s most restrictive abortion law to stand. Rapert announced on Twitter that he would “update [NACL’S] law to mirror the Texas SB8 bill” and presented the NACL model bill as the standard.

Sen. Brian Hughes, the author of Texas’ bill, is a member of both ALEC and NACL.

We are proud of @ChristLawmakers member @SenBryanHughes for this historic ProLife victory. The NACL adopted the #Texas #HeartbeatBill as a model law in July 2020 & we urge every state in the nation to adopt the law ASAP. https://t.co/Ft1OokVXz3 @FoxNews @ABC @NBCNews @LifeNewsHQ https://t.co/wGoLlNEnws

As in Texas’ ban, NACL’s model bill enables “any person” other than a local or state employee to bring a civil action against anyone suspected of performing an abortion, “aiding and abetting” an abortion, or even “intending” to perform, aid, or abet an abortion. The penalty is at least $10,000 per abortion plus court and lawyers’ fees.

Voting is not a religious matter, but that didn’t stop NACL from publishing a July resolution in favor of voter ID. Hughes was also the “lead advocate” for Texas’ voter suppression bill, SB 1.

At the 2019 ALEC Annual Meeting, NACL was provided with a platform to solicit new members and state chairs, CMD reported. According to Rapert, NACL secured nine state chairs and many members at that meeting in Austin, Texas.

NACL’s fiscal sponsor is Rapert’s Holy Ghost Ministries, which paid him $32,000 for five hours of work per week in 2019.

In addition to providing a forum for NACL at its meetings, ALEC regularly shares its attendees list with the National Pro-Life Women’s Caucus, a project of Susan B. Anthony List, to invite ALEC lawmakers to anti-abortion events at the conferance hotels.

At its annual meeting this summer, ALEC shared its list with the Christian Right Family Research Council so that it could invite legislative members to a “Values Action Dinner” at the hotel to promote anti-trans legislation in the states “to save adolescents from experimentation,” CMD reported.

ALEC and Rapert did not respond to CMD’s emails asking about the origins of NACL and ALEC’s role in creating social policies it claims not to work on.

Close Ties to ALEC and Council for National Policy

Nearly half of NACL’s state chairs are affiliated with ALEC: