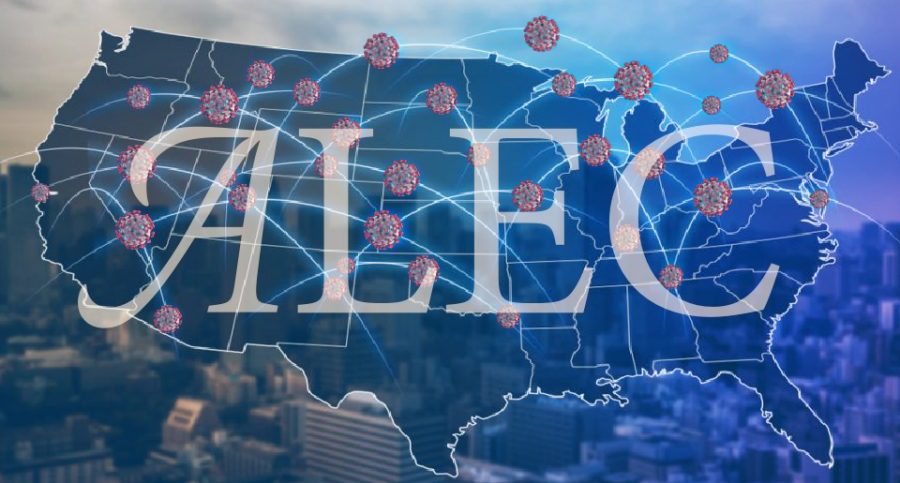 Documents obtained by the Center for Media and Democracy (CMD) show that a powerful corporate lobby front group, the American Legislative Exchange Council (ALEC), is playing a leading role in the right-wing movement to push for early reopening of the economy amidst the coronavirus pandemic that has cost the United States 61,680 lives to date.

ALEC is a corporate pay-to-play operation where legislators and corporate lobbyists vote behind closed doors to adopt model legislation on a broad range of public policy issues.

At a time when many hard-hit states and medical experts are lamenting the lack of federal leadership in dealing with the health crisis, the ALEC documents call for action to “bring the economy back to life through a free market approach that gets big government out of the way.”

In an email to legislators obtained by CMD, ALEC touts that “your ALEC team has been value-pushing your ideas and solutions into the mainstream” with “9 across the States podcast episodes with guests such as Newt Gingrich,” “30 policy prescriptions,” and hosting of “9 calls with top government officials and policy experts.”

ALEC is also coordinating a sign-on letter from “policy leaders and elected officials” to President Trump and state leaders urging them to “reopen the economy and get people back to work.” The letter praises Trump for his “Opening Up America Again” plan and thanks him for a “disaster response [that] is locally executed, state managed and federally supported.”

EMPOWER THE STATES TO SAFELY OPEN THE ECONOMY (p. 1)

View the entire document with DocumentCloud

Recent polling shows ALEC’s aggressive position on resuming commercial activity to be outside the mainstream of public opinion. Three in four voters (73 percent) think we need to continue social distancing measures despite the impact on the economy, 80 percent want more testing before schools and restaurants reopen, and 65 percent said “they did not want to go back to work without more thorough testing.”

ALEC writes in the letter that, “It is possible and preferable for employers to implement best practices to protect the health of their customers and employees – without micromanagement from the government,” but industry practices during the pandemic suggest otherwise.

“Essential” businesses that have stayed open have repeatedly jeopardized the health of their workers, including “thousands of employees across the country” at meat processing plants and shift workers in over 55 of Amazon’s fulfillment centers who have contracted the coronavirus.

A number of governors and health experts have warned that reopening the economy too early could make the coronavirus pandemic worse.

Meanwhile, ALEC is attempting to use the national crisis to leverage movement on its pro-corporate policy agenda. The sign-on letter states in ALEC fashion that a “proven formula of tax relief, deregulation, and lawsuit reform” are keys to rebuilding the economy.

ALEC and the Koch influence network pushed hard for the massive 2017 tax giveaway to corporations and the wealthy that not only has not paid for itself, as Secretary Mnuchin notoriously argued it would, but as of January had led to a national deficit that is 28 percent greater than the Congressional Budget Office projected before the tax cuts.

Exploiting the opportunity of the coronavirus crisis, ALEC has put together a “policy prescriptions” wish list on its site composed of model bills it has drafted and recommends legislative members push for.

Emails obtained through records requests by CMD show that ALEC has been working closely with the Trump administration to convince members that now is the time to reopen. ALEC’s CEO Lisa Nelson wrote in an email to legislators Tuesday that ALEC hosted a call with Vice President Mike Pence (who once quipped, “I can say I was for ALEC before it was cool”) and over 300 members of the “ALEC family” to discuss reopening the economy on April 22.

Pence said on the call that the country “will look much different — and much better — by Memorial Day.”

Nelson also stated that ALEC would be hosting calls about reopening the economy with Labor Secretary Eugene Scalia (April 29) and Education Secretary Betsy DeVos (May 5).

On March 30, ALEC hosted a conference call for its members and partners that featured National Federation of Independent Business‘s Senior Director of Government Relations Kevin Kuhlman and Job Creators Network‘s President and CEO Alfredo Ortiz to discuss how to help “businesses in their communities access capital and restart their businesses.”

ALEC legislators and lobbyists will have an opportunity to put their words into action in July, as ALEC announced this week that it will be going ahead with its plans for an in-person Annual meeting in Orlando Florida on July 15-17. Nelson wrote that the conference will “explore solutions that will empower our attendees with freedom-based policies as we rebuild our states.”

Florida ranks eighth in the country for the most COVID-19 cases.

“Save Our Country Coalition”

ALEC CEO Nelson serves on the national leadership council of the recently launched “Save Our Country Coalition” (SOCC). The right-wing effort is chaired by ALEC’s favorite economist Art Laffer, who writes its annual state economic booklet “Rich States, Poor States” alongside Stephen Moore and Jonathan Williams. Moore is also on the leadership council.

Mary Kiffmeyer, a Minnesota state senator who is an ALEC co-chair of the state, is on the leadership council, and Linda Upmeyer, the former speaker of the Iowa state House and a member of the ALEC board of directors, is a member of the steering committee.

SOCC lists the following as its “key principles to abide by in order to reopen US society and preserve the American way of life”:

ALEC is funded by and deeply tied to the Koch political network. The latest available IRS filings show Charles Koch gave ALEC $334,000 in 2018, and Koch’s Americans for Prosperity was a “Vice Chairman” sponsor of the 2019 ALEC Annual Meeting.

The Koch connections go far beyond ALEC. On the “National Leadership Council” are:

On Save Our Country’s “Steering Committee” are:

Several business executives are also part of the leadership council, including Gristedes Foods CEO John Catsimatdis, a billionaire Trump donor who has advised the president on his coronavirus response in private conversations.

Several far-right extremists have leadership roles in the Save Our Country Coalition, including:

As Blackwell works with the Save Our Country Coalition, Family Research Council president Tony Perkins has spoken with Trump on the phone, urging him to pressure governors to relax restrictions on churches and businesses. The Family Research Council holds a weekly call with Trump administration officials, who have included Attorney General Bill Barr, HUD Secretary Ben Carson, and Chad Wolf, the acting secretary of Homeland Security.

A memo released by Barr on April 27 directed Justice Department lawyers to prioritize litigation against “overbearing” state and local COVID-19 safety measures that discriminate against “religious institutions and religious believers.”

Arn Pearson contributed to this report.

David Armiak is research director with the Center for Media and Democracy. David joined CMD in 2015, has conducted extensive investigations on dark money, corporate corruption, and right-wing networks, and is responsible for filing and analyzing hundreds of public records requests every year. David has a strong research interest in social movements and political power, and has delivered many talks on the subject. He has a Bachelor’s degree in philosophy and anthropology from Boston University and a Master’s degree in Anthropology from the University of Wisconsin-Madison.

Alex Kotch is an investigative reporter based in Brooklyn, New York, and a contributor for the Center for Media and Democracy. A campaign finance expert, Alex helped launch money-in-politics website Sludge, and his work has been published by more than two dozen media outlets including International Business Times, The American Prospect, The Nation and Vice.com.