March 6, 2017 — It’s been nearly three years since the brutal massacre of 46 mostly young progressives by a neo-Nazi-led mob in the Ukrainian city of Odessa. Government repression and right-wing attacks against Odessans demanding justice for that atrocity have been constant, but now have entered a new and much more dangerous stage.

On Feb. 23, Alexander Kushnarev, the father of one of the young people murdered on May 2, 2014, was arrested by agents of the federal Security Service of Ukraine (SBU). Oleg Zhuchenko, chief prosecutor for the Odessan region, claims Kushnarev had been planning to kidnap and torture a member of the country’s Rada, or parliament.

After Kushnarev was arrested, his home was searched and police claimed they found literature that “promotes national hatred between Ukrainians, Russians and Jews.” According to the online Odessan news site Timer, photos of the literature “show only copies of a memorial book for victims of the May 2 massacre and a pamphlet about the history of Ukrainian nationalism.”

The Rada deputy, Alexei Goncharenko, a member of a parliamentary bloc allied with Ukrainian President Petro Poroshenko, was in fact missing for a short time. But he quickly reappeared and was interviewed on the Ukrainian television channel EspresoTV, stating that his abduction had been staged by law enforcement officers.

Kushnarev may have been selected for a government frame-up because Goncharenko had been at the scene of the 2014 massacre and was photographed standing over the dead body of Kushnarev’s son.

Kushnarev’s arrest may be the opening shot of a wider repression of Odessans who have been demanding an international investigation into the events of May 2, 2014. Since he was taken into custody, the homes of other relatives of the victims of May 2 have been searched by police, including that of Victoria Machulko, president of the Council of Mothers of May 2 and a frequent target of both SBU and Right Sector harassment.

Ominous reports are now surfacing of plans to arrest other relatives and supporters and extract “confessions” of plans to commit violent acts against the government.

Background to the current crisis

In the winter of 2014, Ukrainian President Viktor Yanukovych was promoting a trade deal with Russia, while the Rada wanted to orient politically and economically toward the European Union. The EU and the United States both had big stakes in the outcome.

Yanukovych, who was widely suspected of serious corruption, became the target of peaceful protests that were quickly joined by right-wing paramilitary groups, leading to his violent ouster. Some of the rightists, particularly the neo-Nazi Right Sector, maintain strong ties to the new government.

Suspicions of a U.S. role in the coup increased after a conversation between Assistant U.S. Secretary of State Victoria Nuland and the U.S. Ambassador to Ukraine, Geoffrey Pyatt, became public. The two officials seemed to be discussing how to intervene in the crisis to ensure that their favored opposition figure became the new leader.

(1) Nuland had previously bragged that the U.S. had spent some $5 billion supporting “democracy” in Ukraine – funding anti-government NGOs.

(2) Nuland also made a big show of showing U.S. support for the protesters by handing out baked goods during the anti-government actions.

(3) The coup appealed to those who consider themselves Ukrainian “nationalists,” many of whom are the political descendants of World War II fighters who alternated between collaborating with and opposing the Nazi occupation of their country. Coup opponents, on the other hand, were largely ethnic Russians, who make up a large part of the population in eastern Ukraine and who remain fiercely anti-Nazi.

Opposition was especially strong in Crimea, the militarily strategic peninsula that had been part of Russia for hundreds of years until 1954, when it was administratively transferred from Soviet Russia to Soviet Ukraine. After the coup, Crimea held a referendum in which voters overwhelmingly decided to rejoin Russia. Unrest also developed in the eastern Dombass region, where anti-coup self-defense forces declared several independent “people’s republics.”

Odessa: The Pearl of the Black Sea

Odessa was a special situation. Ukraine’s third largest city is a major commercial seaport and transportation hub on the Black Sea. It’s also a multi-ethnic cultural center where Ukrainians, Russians and many other ethnic groups live in relative harmony. Although less than a third of the city’s population is ethnic Russian, more than three-quarters speak Russian as their first language and another 15 percent speak Ukrainian and Russian equally. Odessa also has a strong collective memory of the brutal occupation it suffered under Nazi-allied Romanian fascists during WWII.

All these factors resulted in strong anti-coup sentiments among many Odessans, some of whom began agitating for a change to a “federalist” form of government in which voters could choose their own local governor. At present, governors are appointed by the federal government, now in the hands of authoritarian anti-Russians in bed with neo-Nazis.

The massacre at Kulikovo Pole

In May of 2014, Odessa was hosting a big soccer match. Thousands of fans were pouring into the city. In Ukraine, as in many countries, many soccer fans are political. Some are overtly right-wing.

On May 2 – just three months after the coup – these right-wing fans held a militant nationalist march. They were joined by neo-Nazi activists who steered the crowd toward Kulikovo Pole (“field,” or square), where pro-federalist petitioners had set up a small tent city.

A huge mob of these right-wingers descended on the camp, set fire to the tents and chased the petitioners into the nearby five-story House of Trade Unions, which they then pelted with Molotov cocktails, setting the building ablaze.

At least 46 people died that day in the massacre at Kulikovo square. Some were burned to death, some suffocated from the smoke, others were shot or fatally beaten after jumping from windows to escape the flames. Google “Odessa massacre” and you’ll find scores of cellphone videos of the siege, with the faces of the perpetrators clearly visible, while police officers stand idly by, watching the carnage. 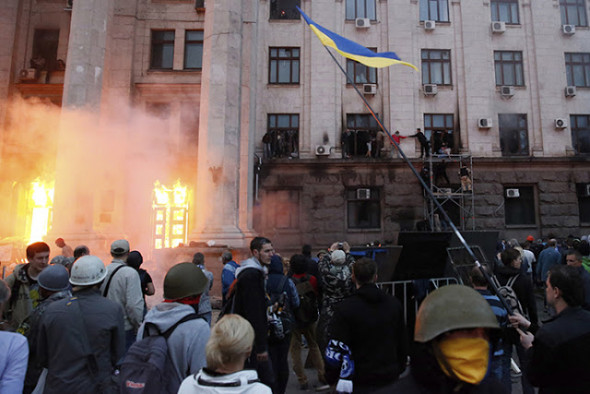 And yet, 34 months after this tragedy, not a single person has ever stood trial for taking part in the massacre.

Almost immediately, relatives, friends and supporters of the murdered formed the Council of Mothers of May 2 and demanded an international investigation. Several bodies, including the prestigious European Council, tried to investigate, but each effort was blocked by the Ukrainian government’s refusal to cooperate.

Every week since the massacre, Council members and supporters gather in front of the House of Trade Unions to lay flowers, say prayers and remember their dead. And almost every week local members of Right Sector show up to harass the relatives, almost all of them women and old men, sometimes physically attacking them. 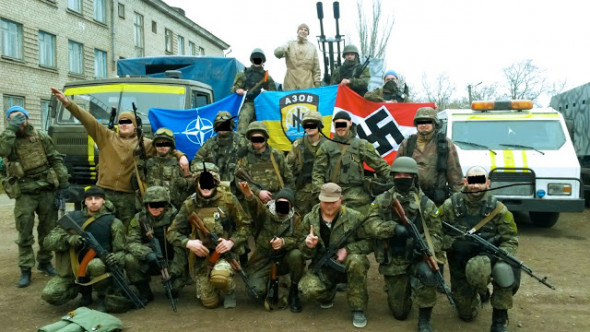 Continuing pressure on the Council of Mothers

The following are just some examples of what has been happening:

In the spring of 2016, the Council of Mothers called for a large second anniversary commemoration of the massacre. The fascist organizations demanded the Odessan city government ban the memorial and threatened mass violence if it did not. Meanwhile, the SBU announced that a cache of explosives had been found in Odessa, supposedly linked to anti-coup activists. Mothers’ Council President Victoria Machulko, whose apartment had already been raided by the SBU, was ordered to report for questioning at 8 am the day of the planned memorial and was detained until 10 that evening, forcing her to miss the memorial. Odessa authorities also announced they had received information about a bomb threat at Kulikovo and had closed the square – until midnight on May 2. Despite the threats and repression, some 2,000 to 3,000 Odessans turned out for the May 2 memorial, joined by international observers from a dozen countries, including the United States. (4)

June 7, 2016: Nationalists carried out a siege of the Odessa Court of Appeals, barricading the courtroom and threatening to set fire to the building and kill the judges hearing the case of Yevgeny Mefёdova, a progressive held in prison since the massacre of May 2. None of the nationalists were arrested.

July 13: representatives of the Polish Senate, specialists in human rights, were in Odessa to meet with witnesses of the massacre. Nationalists physically blocked the representatives’ hotel entrance.

Oct. 9: During the weekly memorial at Kulikovo square, nationalists tried to grab a flag of Odessa held by a 79-year-old woman, causing her to fall and break her arm.

Oct. 22: Right-wing activists interrupted a film showing held in commemoration of those who died on May 2, causing it to be cancelled.

Sergey Sternenko, leader of the Right Sector in Odessa (https://www.facebook.com/sternenko), has carried out a campaign demanding that Professor Elena Radzihovskaya be fired from her job at Odessa University, claiming she is guilty of “anti-Ukrainian” activities. The professor’s son Andrey Brazhevskiy was one of those murdered at the House of Trade Unions.

Sternenko has led a similar campaign calling for the dismissal of Aleksander Butuk, a blind associate professor at Odessa Polytechnical University. Professor Butuk’s ”crime” was that he was inside the House of Trade Unions but managed to survive the fire and participate in the weekly commemorative vigils.

Despite this pressure from the government and neo-Nazis, the Council of Mothers of May 2 has continued to hold their memorials every week at Kulikovo square. As long as they are able to be active and public, Odessa remains a critical outpost of resistance to fascism in Ukraine.

That resistance is now under the most severe attack since 2014. An immediate response is needed!

The Odessa Solidarity Campaign is calling for:
(1) the immediate release of Alexander Kushnarev,
(2) the dropping of all charges against him and
(3) an immediate end to all government and right-wing harassment of members and supporters of the Council of Mothers of May 2.

You can help by contacting Ukrainian Ambassador to the U.S. Valeriy Chaly and raising the above demands.

This statement was issued March 6, 2017, by the Odessa Solidarity Campaign

The Odessa Solidarity Campaign was founded in May 2016 by the United National Antiwar Coalition after UNAC sponsored a delegation of U.S. human rights activists to attend the second memorial of the Odessa massacre held at Kulikovo square on May 2, 2016.