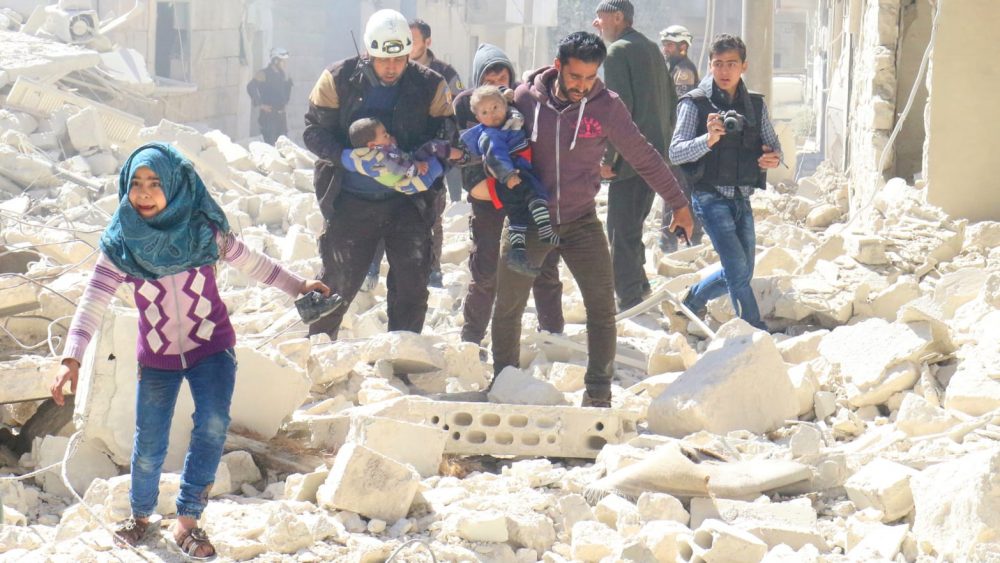 All Civilian Lives Are Equal, But Some Are More Equal Than Others

Planet Earth circa 2020: this is Orwell’s world; we’re just living in it.

Who better to resurrect in this pandemic-protest moment than a leftist so lefty he ditched a life of relative English privilege to fight Franco’s fascists in the Spanish Civil War – only to turn communist dogma’s fiercest critic and earn the ire of his former friends on the intellectual Left? After all, today’s – like Orwell’s – time of disease, rebellion, and endless war reminds one of perilous power of platitude. Old Georgie’s literary “newspeak” forebodings – “War is Peace; Freedom is Slavery; Ignorance is Strength” – remain relevant, naturally, but now we’ve added the reform-snuffing “All Lives Matter” to the mix.

For the sake of personal sanity, I’ll table the domestic racial justice applications of this absurd non-concept. Instead, let’s test it in another field of perennial morbidity: America’s endless imperial wars. Do all foreign lives matter? Surely at least the civilian ones should. I mean, Ellen and Michelle’s born-again-buddy George W. Bush kicked off this latest round not of expeditionary war not in the name of mere (post-9/11) counter-terror, but a veritable and fantastically grandiose “Freedom Agenda.” Only, in practice – cue Orwell’s head-shaking about universalist theories in general – Washington’s agenda has proven rather uneven to say the least. In fact, when it comes to foreign civilian lives – even the wee babes among them – Orwell’s cheeky Animal Farm wisdom consistently applies: some lives matter more than others.

Enter the latest Syria sanctions. As Max Blumenthal’s stunning and comprehensive recent investigative report illustrates, an ongoing but recently tightened U.S. blockade will only hurt the most vulnerable of citizens – not, and never, regime elites – with the misfortune to live in the swathes of Syria under President Bashar al-Assad’s control. This ought to seem strange since a broad alliance of neoliberal and (faintly) conservative establishment politicians and pundits have spent nearly a decade vigorously lobbying for regime change ostensibly to save those very same Syrian civilians. Could it be that Beltway elites and their defense industry-moneymen are now in the petty-vengeance business against an (admittedly unsavory) Assad government that had the temerity to seek help from the twin bad-boys of Russia and Iran, and then basically won the bloody civil war? But of course.

Think about it a moment: Washington’s record speaks for itself. Seen from the Potomac’s shores, the value of a civilian life almost directly correlates with how the US Government of the moment feels about the regime that man, woman, or child momentarily lives under. Consider it the obscenity of the arbitrary. A few examples should suffice, but one could fill volumes with consistent exemplars.

“Heroic” Libyan rebels – and proximate civilians – mattered once, and only once, President Barack Obama decided their bizarre but harmless-to-the-homeland dictator Colonel Gaddafi had to go. Yet, ten times as many Yemeni lives-extinguished (including at least 85,000 starved-to-death children) didn’t and don’t, because their killers are Washington’s oil-rich Saudi allies. In fact, a complicit US military even lent those theocratic state-terrorists a vital murder-logistics hand. See how the macabre game works?

Sometimes the value of the very same civilians can even invert within just a handful of years according to an always capricious Washington’s callous calculus. Exhibit A in this phenomenon must be those ever-embattled Syrians. Their lives matter if they oppose the Assad regime and/or are (well, maybe) gassed by that Washington adversary. That applies even if they’re devoted Islamists affiliated with the jihadi franchise (you know, Al Qaeda) that piloted a few planes into American buildings on 9/11. Yet once the Assad regime held, and if certain Syrians found themselves in its territorial fiefdom, they were apparently rendered fair game in the resultant round of Washington’s crippling sanctions – which are sure to end or curtail more than a few lives.

Of course, the same goes for the victimization-as-a-way-of-life Kurds. Washington has used, abused, ditched, and rediscovered this the world’s largest stateless group since at least 1919 – and certainly with particular panache since the days of Henry “the realist” Kissinger. Taken to its logical (or is it absurd?) extreme, Washington’s value-of-life taxonomy even dithers over what constitutes a full-blown genocide. To wit, the lives of Holocaust’s victims mattered – not that the US did much to stop the mass murder at the time – because their killers were villainous Nazis; but those of the Armenian genocide didn’t (and don’t) matter since their butchers were the now NATO-allied Turks. In fact, so far as a criminally hedging Washington is concerned, that Armenian extermination didn’t officially happen at all. One must spare allied feelings, after all (and 100 years after the fact).

So how can the other 96 percent of the world’s people – unlucky enough to be born beyond our “sea to shining sea” – save themselves? Well, unfortunately, philosophical “doctors” have long agreed that the Washingtonian strand of strategic-ethical schizophrenia is one of the most difficult to pin down. Indeed, the broad consensus of history “physicians” agree this particular civilian-empathy disorder demonstrates acute morphing and mutation abilities to resist either detection or treatment. Frankly, it’s hard to know if or when the US Government will determine that a particular human life matters. Still, here’s a handy heuristic for all the foreign civilians out there wondering whether Washington will ascribe any value to their lives when the time [of judgment] comes:

Anyway, the anxious foreigner should still take these hardly comprehensive rules of thumb with a grain of salt. After all, they were composed with the obtuse breeziness inherent in an authorial-setting of a comfortable recliner in a fairly affluent corner of an American university town, and on a device probably constructed in the sort of foreign factory where conditions are so abysmal the workers leap to their deaths with some regularity. Truth is, given Washington’s heartlessly sordid track record, my shorthand list probably won’t save you. Apologies, and all that.

Only a collective commitment to empathy can do so. That requires both personal and communal journeys – quests even – to learn what’s really afoot, thus know, then feel, then (and here’s the hard bit) live the values of justice and decency. That ought not – and probably, practically, can’t – mean sending assault-rifle totting American 20-year-olds off on humanitarian crusades. We’ve seen how that ends. But it does demand that US foreign policies consistently value and prioritize all civilian lives and never make an already too-cruel world worse.

Finally, I sure hope Americans’ collective pivot to propriety doesn’t require others to see what I can’t unsee, in order to know what I can’t “unknow” – all largely catalyzed by my too-sensitive recoil from the sight of the first (but hardly last) teenager’s splattered brains on my first (but again, not last) stint as an immoral invader.

An altogether different literary voice than George Orwell, the melancholic booze-soaked Welshman Dylan Thomas, articulated the salient rejoinder better than most. His morbid muse was a child burned to death during the Nazi Blitz on London:

The majesty and burning of the child’s death.
I shall not murder
The mankind of her going with a grave truth…
After the first death, there is no other.

Only that English child, unlike her soon-to-starve Syrian descendant, was “lucky” enough to expire painfully within American-allied borders. She, at least, could be mourned. Thank heavens for small mercies…

Danny Sjursen is a retired US Army officer and contributing editor at Antiwar.com His work has appeared in the NY Times, LA Times, The Nation, Huff Post, The Hill, Salon, Mother Jones, and Tom Dispatch, among other publications. He served combat tours in Iraq and Afghanistan and later taught history at West Point. He is the author of a memoir and critical analysis of the Iraq War, Ghostriders of Baghdad: Soldiers, Civilians, and the Myth of the Surge. His forthcoming book, Patriotic Dissent: America in the Age of Endless War (Heyday Books) is available for pre-order. Follow him on Twitter @SkepticalVet and see his website for speaking/media requests and past publications.