All Confusion And Contradictions In Trump’s Apocalyptic America

Above photo: All photos by Andre Vltchek.

Americans are angry. I suspected they would be, but I got confirmation that they are, all over the place: in Miami, Washington D.C., Baltimore, Minneapolis, New York, and Boston. Basically, everywhere I went, while “taking pulse and temperature” of this country where I used to live, cumulatively, for more than a decade, I felt frustration and bewilderment.

“What is your job?” Shouted an African-American lady, right in the middle of the Union Station in the nation’s capital. Obviously, it was a rhetorical question, as she almost immediately answered her own query: “There are no jobs!”

Mr. Floyd got murdered by perverse, sadistic police officers. The economy is collapsing, at least for the poor and the middle class. The COVID-19 pandemic is like a rollercoaster, up and down, up and down, with no end in sight.

People are confused, while the government is increasingly aggressive. Much of the so-called “progressive media” is suddenly not behaving progressively at all. Racism is sometimes fought against with brand new types of racism. Anti-racist movements get periodically infiltrated by the extreme right-wing groups, as I witnessed in Minneapolis.

The U.S. government is basically confronting countries like China, Venezuela, Russia and Iran. Not just verbally, but militarily. And the reason why our world is not in the middle of WWIII, yet, is because of tremendous restrain and wisdom of the U.S. adversaries.

At home, no jobs, no coherent policy on how to fight against the COVID-19; no national unity in the moment of disaster.

What I have been witnessing so far were some jerky, inconsistent moves on the part of the governments (the federal and the state ones), as well as the ensuing confusion, complimented by half-hearted, and patchy solutions. Quite the opposite of what I experienced in Asia, be it in socialist China and Vietnam, but also in the far from the socialist nations such as Thailand, South Korea, the Philippines.

Just a quick reality check, and it becomes clear that the U.S. system already failed, squarely and patently: 30 million people out of jobs since the pandemic began. Three million infected, and probably, by now, much more. Over 130.000 U.S. citizens lost their lives. Of course, it all depends on how the total number of victims is calculated. Still, no matter how it is done, even if the lowest numbers are correct, the United States is the most affected country on Earth, which is an absolute shame, considering that it is still one of the richest. 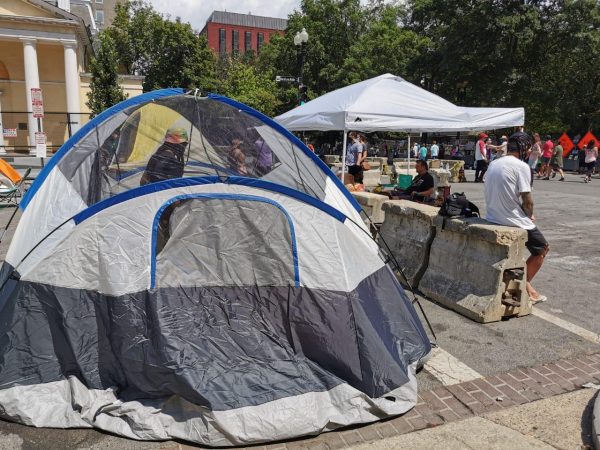 The Trump Administration is, of course, aware of all this, and just a few months before the Presidential elections, it is desperately searching for someone else to blame for this enormous national disaster. The President and his men are frantically pointing fingers in all directions: from China (P.R.C.) to the World Health Organization (WHO). From the Communist Party of China, from President Maduro to the U.S. state governors and those very few “disobedient” members of the mass media who still dare, at least occasionally, to challenge the official narrative.

Conspiracy theories are abundant. Demonstrations and protests are taking place all over the nation. In New York City, the murder rate is up. Sirens are howling. People are uttering clichés. “Follow the money,” I hear everywhere.

Government, mass media, as well as a great majority of the so-called ‘progressive’ media (do not confuse it with left-wing media, which hardly exists in the United States, anymore), are blaming socialist China, as they are blaming Russia, Iran, and other independent-minded countries.

This is clearly a political fight. The pandemic is there, of course, but for the White House, it is nothing else other than background noise and stench. On all fronts, the U.S. regime is fighting for its survival. Trump is clashing with various foreign countries, those which have a real, left-wing ideology.

Much is at stake. The survival of the entire repulsive system is now in question. If this terrible scheme collapsed, the whole world would rejoice; it would benefit. But the majority of North Americans would lose. Even those who like to paint themselves as ‘progressives’ or ‘different ‘or “also victims”. And so, there are thousands of conspiracies aimed at discrediting the fury which followed the killing of Mr. Floyd. There are countless theories about the origins of the pandemic, as well as its management, or, more precisely, mismanagement.

For both the Trump and his Democratic Party opponents, it is now absolutely essential to discredit morally and socially much more successful countries like China, Russia, even Cuba.

Monstrous propaganda tsunami has been unleashed in the United States, but also the U.K. It is unprecedented and overwhelming. Alternative voices are silenced. Censorship, even amongst the so-called ‘alternative’ Western publications, is becoming bulletproof. And it all happened literally overnight. While my essays used to be reprinted just 2-3 months ago by at least 20 major outlets in the United States and Canada, now it is at most five which dare to publish me. My internationalist, unconditionally left-wing angle did not change at all. But true colors of the U.S. and Canadian “progressive” and “independent” media got exposed. Simultaneously, my work has been gaining great support in non-Western countries. This says a lot about the situation!

Back to Trump. He is attacking foreign countries, horrified that people could notice how optimistic and compassionate some other nations are. And how nihilist, over-rated, empty and depressing is the United States.

He is also antagonizing those who are now bringing down statues of Western bigots, genocidal cadres, slave owners, and conquerors.

He is clearly soiling his pants.

In the same breath he is smearing the health officials, who dare to paint bleak (read: realistic) picture, and urging him to put people’s interests above those of the economy, particularly the private sector.

“Five months into a still-raging pandemic that has killed more than 130,000 Americans, the long-simmering tensions between President Donald Trump and the health experts who staff his government have escalated from private griping to shrugging disagreement to now open dispute.

The result, people at those agencies say, is a new sense of demoralization as they continue their attempts to fight a once-in-a-generation health crisis while simultaneously navigating the whims of a President who has shown little interest or understanding of their work.

That Trump does not trust nor follow the advice of experts such as Dr. Anthony Fauci, the nation’s top infectious disease specialist, is hardly new. The President has not attended a meeting of his coronavirus task force in months, and recently its sessions have been held outside the White House, including on Wednesday at the headquarters of the Department of Education. Fauci was told to participate in the meeting remotely by videoconference, preventing him from participating in a midday task force press briefing…”

Precisely, nothing new. Except that even CNN, one of the mouthpieces of the empire, is finally noticing!

It is all about spreading nihilism, on both domestic and foreign fronts.

China is getting attacked in the most extreme, unreasonable, and even bizarre fashion by both President Trump and his team, but also by their adversaries. After winning the fight against the COVID-19, the P.R.C. has been blamed for virtually everything, from withholding data, negatively influencing the WHO, and even for the manufacturing of the virus in one of its laboratories based in Wuhan, and then spreading it to all corners of the world. “Chinese Virus,” the White House has been calling it, while no one knows yet for certain, where it actually really originated. Naturally, Beijing and entire China have been indignant.

None of the U.S. government accusations have been proven. Allegations after allegations have been ridiculed by the U.S. medical, scientific community, and often by the academia. But the administration already went too far, and it is clearly unable to stop its own attacks anymore. Trump ignores ridicule, hoping that his macho, vulgar and provincial rhetoric would appeal to certain group of uneducated, extremist part of the population, and win him the second term.

Even some individuals related to the U.S. diplomatic community in China, such as Tzu-i Chuang Mullinax and Roseanne Freese, are voicing disagreement with the official White House narrative.

Analyzing the uprising which followed the murder of Mr. George Floyd (who happened to be COVID-19 positive), I spoke to dozens of Americans of all races and social standings. The majority of them have been outraged by the government’s handling of the epidemy and the unrest. Not one person that I spoke to actually blamed China or any other foreign country, directly, for the dire situation in the United States.

Anti-Chinese rhetoric is clearly a political football played by both Republicans and Democrats. The same goes for the anti-Russian sentiments, including belittlement of the Russian foreign aid sent to the United States, at the very beginning of the pandemic.

The strategy of the U.S. government is simple; some would say primitive: “Whatever terrible is happening inside the country, just counterattack and blame everything on the political opponents, and if you can’t, attack the foreign countries; China, Russia, even Iran or Venezuela. Or smear the United Nations agencies, like WHO.  Guide insults to all corners of the world, but also don’t forget to send the battleships.”

There is much that is going wrong in the U.S., very, very wrong. Tents with homeless people could now be spotted all around the downtown Washington D.C. The White House has been converted into a fortress. And while millions of American people are marching, protesting against the endemic racism and discrimination, the K.K.K. and its affiliates like Proud Boys, are burning cities and infiltrating legitimate anti-racist demonstrations (something that I will soon be addressing in my essays).

Images are apocalyptic. The situation is explosive.

This is one of the most dangerous moments in world history. But, shockingly, not much is being written about the urgency and threat which our planet is facing! 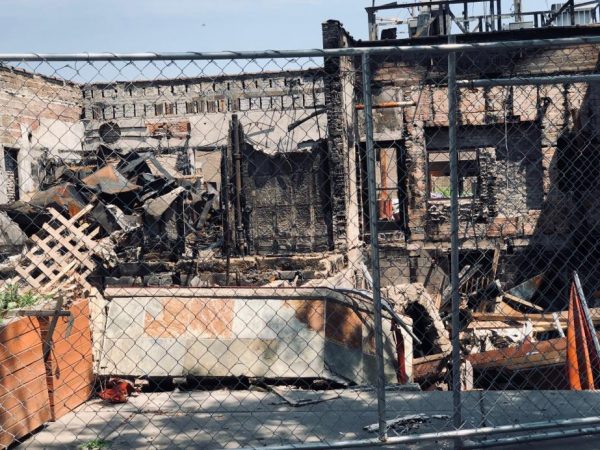 Andre Vltchek is a philosopher, novelist, filmmaker and investigative journalist. He has covered wars and conflicts in dozens of countries. Six of his latest books are “New Capital of Indonesia”, “China Belt and Road Initiative”, “China and Ecological Civilization” with John B. Cobb, Jr., “Revolutionary Optimism, Western Nihilism”, a revolutionary novel “Aurora” and a bestselling work of political non-fiction: “Exposing Lies Of The Empire”. View his other books here. Watch Rwanda Gambit, his groundbreaking documentary about Rwanda and DRCongo and his film/dialogue with Noam Chomsky “On Western Terrorism”. Vltchek presently resides in East Asia and Latin America, and continues to work around the world. He can be reached through his website, his Twitter and his Patreon.