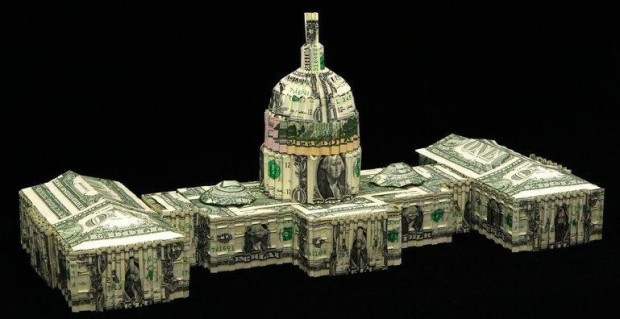 Above: U.S. Capitol building Made wilth dollar bills by Orudorumag11 from Deviant Art.

Note: Next week there will be key votes in the US Senate on Fast Track Trade Promotion Authority. See what you can do to stop it here. The article below shows the kind of corruption we are up against. It covers the US House of Representatives where a vote was held last week. The vote was 218 in favor of TPA. That is the exact number for a majority in the US House of Representatives (9 did not vote in the House). Now TPA only needs to pass in the Senate when they vote this week and it will go to the president’s desk for his signature.

The battle over TPA has become a conflict between people and money. The people won in the House two weeks ago but then the Republican leadership working closely with President Obama, along with key Democrats, manipulated the rules for a re-vote. But rather than a re-vote they came up with a scheme to avoid a re-vote on Trade Adjustment Assistance which they lost in the House and which stopped TPA from becoming law. Leadership created a convoluted process that now appears to be on the verge of success. It will make it very hard to stop the Obama trade agreements that will dramatically shift power over the global economy and all levels of US government to corporations.

While a wall of phone calls have been coming in to Congress from across the political spectrum, more is needed and, sadly, we do not see it materializing. We should be shutting down all of the streets around Congress next week. Anger should be shown in the home offices of US Senators (there are some protests planned, but will they show the anger?). I fear we have all done a lot, but not enough to combat the massive amounts of money that is flooding Congress. President Obama will get his pay-0ff when he leaves office in big donations to fund three Obama Centers in Chicago, NYC, and Hawaii, as well as funding of his non-profit and big speaking fees.

This debate highlights the intense corruption of government and the economy by big business interests and shows that while our movement of movements showed a lot of power, we must do more if we are going to combat the deep corruption of the United States.  KZ

Many think our government is for sale. However, by taking a look at the facts below provided by the Open Secrets, it is easy to understand where they are coming from. Looking back at Friday the 12th, the House voted on Trade Promotion Authority (TPA), the controversial bill that gives power to the executive branch to negotiate treaties. TPA limit’s Congress’ ability to better a trade deal by subjecting members of Congress to 90 days of reviewing the trade agreement, prohibiting any amendments on the implementing legislation, and giving them an up or down vote. TPA passed with a mere 219-211 vote with only 218 needed to pass. The real shocker comes from the amount of money each Representative received for a yes vote. In total, $197,869,145 was given to Representatives for a yes vote where as $23,065,231 was given in opposition.

The fifth highest paid legislator is somewhat of a “hero” in comparison to others. Representative Steny Hoyer (D-MD) received $1.6 million for a yes vote and only $282,710 for a no vote. Despite of his high contribution from those in favor of TPA, he still voted a solid nay.

We also have other hero stories.

Democrats are not the only heroes in this voting session. GOP members spoke very loud and clear.

Those numbers are absolutely staggering. Corporations are taking control of what policies are approved or blocked in the U.S. We cannot sit around while corporations decide what is “good” for America or not! This is a democracy, not a plutocracy! Contact your representatives and let them know that you do not want them to vote in favor of TPA!

Paola Casale is a graduate of Otterbein University. She works for Economy In Crisis as a journalist who loves to dig up the truth. Paola meets with members of Congress in D.C. to discuss international trade agreements and how to aim towards fair trade instead of free trade.