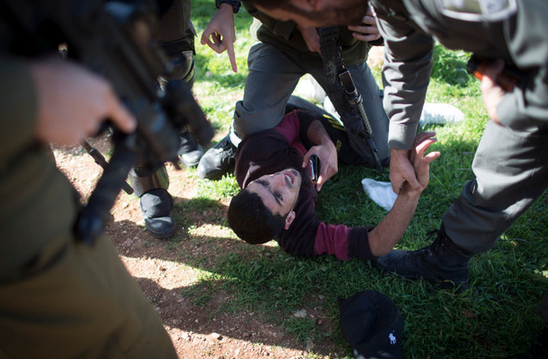 Dozens of alumni and former staff members of an elite Jerusalem high school have stated their refusal to serve in the Israeli military, and call on future graduates of the Israel Arts and Sciences Academy to reject the draft.

“Refusing to serve in the Israeli military is not an easy choice, but a moral stance against a collective mood manifested in racism and violence on every street these days,” the letter, published yesterday, states.

The racism and violence of this “collective mood” in Israel, encouraged by lawmakers who called for genocidal measures against Palestinians, reached a fevered pitch this summer as Israel’s bombs rained down on Gaza. Entire families were erased there under the command of Israeli colonels like the Givati Brigade’s Ofer Winter, who told his soldiers that they were engaged in a war to “wipe out” an “enemy who defames” God.

The letter calling for refusal to serve in the army takes a stand against the “pressure coming from one’s home, friends, professional environment and the media, and to not take part in the crimes done in our name.

“The refusal to serve means also resisting the militaristic indoctrination process we all went through since our childhood in schools, youth movements, national ceremonies, in high school — and which continues in our adult lives,” the statement adds.

The letter’s nearly sixty signatories, as of the time of publication, include both Palestinians and Jewish Israelis.

In addition to Israel’s oppression in the occupied Gaza Strip and West Bank, the statement criticizes the “separation-regime based on the notion of an ethnic superiority of Jews over Palestinians” which has “institutionalized a system of ethnic-based discrimination in the ‘48 territory,” referring to present-day Israel.

The signatories also mention “oppression mechanisms” used against “Mizrachi, Ultra-Orthodox, Ethiopians, women, residents of the periphery and the poor wherever they are” in Israel.

“Backed by the military, Israeli governments are exploiting the weakened populations for ethnic cleansing and dispossession projects across the Green Line, in the Negev and the Galilee, using them to fight the so-called ‘demographic war,’” the letter states in regard to Israel’s violent efforts to maintain a Jewish demographic majority.

The letter implies that some of the signatories have previously served in the army.

“When we were teenagers some of us did not have the knowledge, the courage or the proper networks of support to allow such an act” of refusal, the signatories state, “and we want you to know that there are voices like ours as well as different frameworks that support those who refuse or consider refusing.”

The intervention against militarism from the Israel Arts and Science Academy graduates comes amid growing efforts from the Palestinian community in Israel to confront mandatory conscription and voluntary recruitment to the army.

The recent Refuse — Your People Will Protect You campaign endeavors to give legal and financial support to conscientious objectors from the Druze community so they have alternatives to the many state and private benefits conditioned on army service.

Young people from the Druze religious minority, unlike the majority of the estimated 1.7 million Palestinian citizens of Israel, are required to serve in the military.

Druze youth Omar Saad was imprisoned last year for refusing to serve and spent 190 days in detention as punishment.

Students and faculty at the Hebrew University in Jerusalem protest attempts to recruit Palestinian Christians to Israel’s army in May. (Ryan Rodrick Beiler / ActiveStills)

Saad’s mother was one of many speakers, including prominent community leaders and political figures, who spoke at a conference organized by Palestinians in Israel this summer to push back against the state’s new sectarian efforts to voluntarily recruitChristians into the army.

The Electronic Intifada reporter Sawsan Khalife’ described the June meeting as “one of the largest assemblies of Palestinian community leaders inside Israel in the last decade.”

Earlier this year, fifty Israeli youths sent an open letter to the prime minister stating their refusal to serve in the army in protest of the military occupation of the West Bank and Gaza Strip, where Palestinians’ human rights are violated “on a daily basis.”

One of the youths, Uriel Ferera, was finally exempted from serving in the military on 21 December after serving 177 days in military prison for his conscientious objection.

Another refuser, Udi Segal, went on hunger strike in November to protest his imprisonment.

Uriel Ferera, photographed in April, was exempted from the army this month after serving 177 days in prison. (Yotam Ronen / ActiveStills)

Israel’s summer campaign of violence in Gaza, which claimed more than 2,200 Palestinian lives, also generated protest within one corner of the military.

A group of reservists serving in the military’s elite intelligence apparatus known as Unit 8200 declared in an open letter to Netanyahu their refusal to “take part in actions against Palestinians” and “continue serving as tools in cementing the military’s control over the Occupied Territories,” as The Washington Post reported in September.

As The Electronic Intifada’s Ali Abunimah noted at the time, “What generated particular outrage was the letter-writers’ revelation that Unit 8200 eavesdrops on Palestinians in order to use personal information to coerce them into collaboration with Israel.”

“While such extortion – for example against Palestinians from Gaza needing to travel for life-saving medical treatment — has long been documented by human rights organizations, it has been rare for it to be acknowledged in this manner by those tasked with doing the extorting,” Abunimah added.

Like it did following the reservists’ letter, and after the fifty youths’ pledge to refuse, Israel’s political establishment has lashed out in response to the Israel Arts and Sciences Academy alumni statement.

Deputy Education Minister Avi Wortzman accused the signers of “using the name of the school to gain media attention” and claimed that the Israeli military “has been and remains the most moral army in the world.”

One of the tasks of this “most moral army” is the arrest and imprisonment of Palestinians living under Israeli military rule in a bid to suppress any efforts to resist the occupation.

Referring to statistics compiled by the United Nations monitoring group OCHA, Ali Abunimah commented for The Electronic Intifada last week: “Israel carried out an average of 96 ‘search and arrest’ raids every week during the year, up from 75 per week in 2013. These assaults often take the form of night raids on homes, terrorizing entire families and communities.”

There were 6,500 Palestinians in Israeli prison as of 1 October, according to the Palestinian human rights and prisoner advocacy group Addameer.