A new study measured the mental health of Philadelphia residents before and after blighted lots had been converted into green spaces.

Almost one in five American adults report some form of mental illness; more than 16 million adults experience depression alone every year. Yet patient mental health services only account for an estimated 5 percent of total medical care spending in the United States.

Noting that “spending time and living near green spaces have been associated with various improved mental health outcomes, including less depression, anxiety, and stress,” a group of researchers from the University of Pennsylvania set out to determine if by changing the places near where people live, they could affect change in mental health outcomes.

Their conclusion may come as little surprise to those of who know the health benefits of green space: “Greening vacant urban land significantly reduces feelings of depression and improves overall mental health for the surrounding residents.”

But just how much improvement local residents reported is surprising. 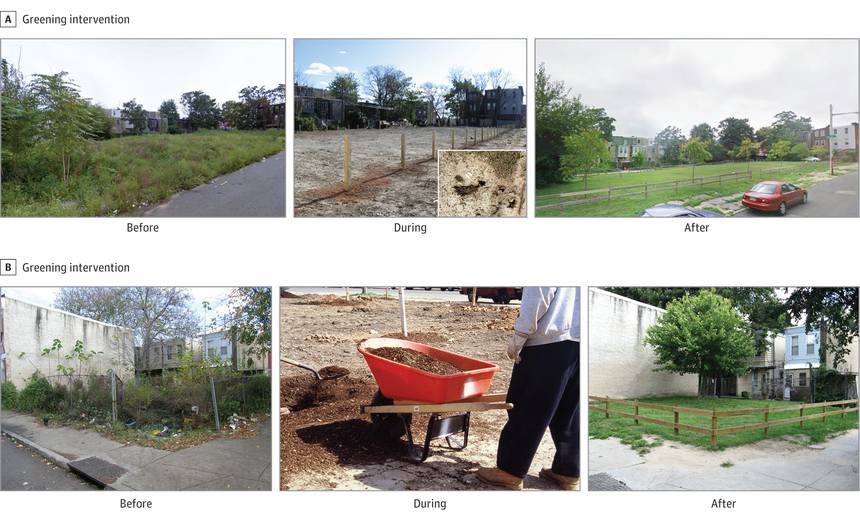 They found that those living within a quarter of a mile radius of the 206 newly landscaped lots had an average 41.5 percent decrease in feelings of depression and a nearly 63 percent decrease in self-reported poor mental health compared to those who lived near the lots that had not been cleaned. For areas below the poverty line, feelings of depression among residents who lived near the newly green lots decreased by more than 68 percent.

The scientists used the Kessler Psychological Distress Scale (K6) – a screening tool used to assess mental illness in the community – to survey residents near the lots. The surveys were administered 18 months before the lots were worked on, and once again 18 months after.

Tellingly, there was little difference in mental health reported by respondents living near both the lots which underwent trash clean up and those that had nothing done, suggesting that the value is in the creation of green space. And speaking of value, the lots were transformed for about $1,600 each and cost around $180 per year to maintain. Thus, the authors say, vacant lot greening may be an attractive intervention for policy makers seeking to address urban blight and promote health.

“Dilapidated and vacant spaces are factors that put residents at an increased risk of depression and stress, and may explain why socioeconomic disparities in mental illness persist,” says lead author Eugenia C. South, MD, MSHP, an assistant professor of Emergency Medicine and a member of the Center for Emergency Care and Policy Research at Penn. “What these new data show us is that making structural changes, like greening lots, has a positive impact on the health of those living in these neighborhoods. And that it can be achieved in a cost-effective and scalable way – not only in Philadelphia but in other cities with the same harmful environmental surroundings.”

Given the large number of vacant lots across the United States – land often blighted or heaped with trash and overgrown vegetation – this strategy could be very effective in helping people. Imagine a program to turn lots into other green spaces as well, like food forests or pollinator habitats that would provide added benefits.

“While patient-level therapies for mental illness will always be a vital aspect of treatment,” note the authors, “changing the places where people live, work, and play may have broad population-level effects on mental health outcomes.”

The study, conducted by researchers from the Perelman School of Medicine and the School of Arts & Sciences at the University of Pennsylvania and other institutions, was published in JAMA Network Open.