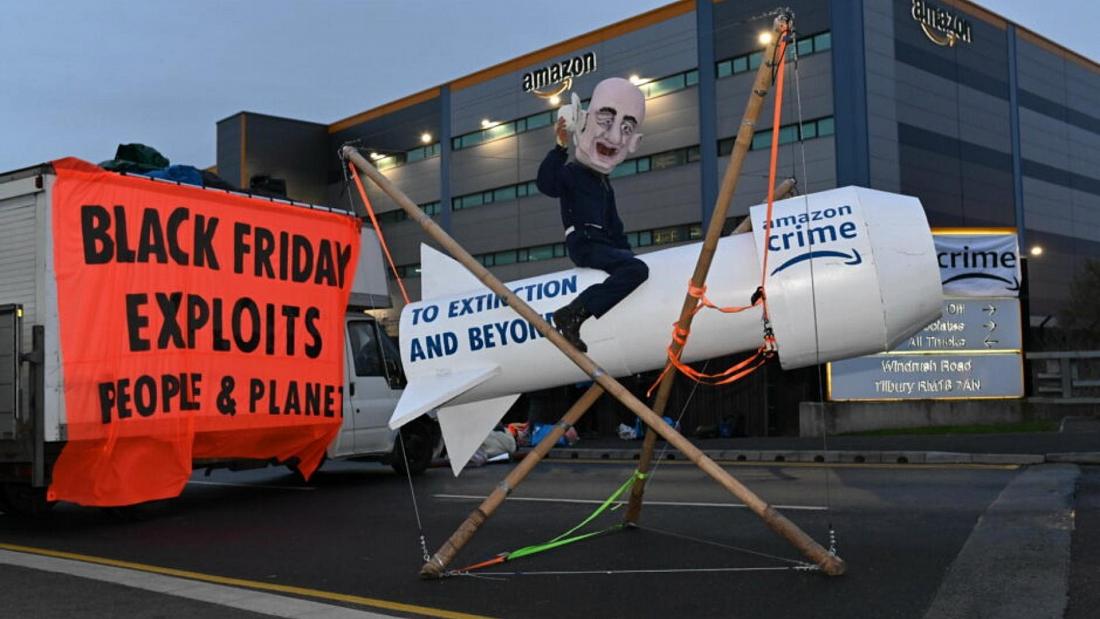 Above Photo: An activist dressed as Jeff Bezos rides a rocket outside of an Amazon depot. Extinction Rebellion.

A total of 15 Amazon fulfilment centres in the UK, Germany and the Netherlands have been blocked by Extinction Rebellion ahead of major global discount day, Black Friday.

The emissions created by Black Friday sales are “phenomenally’ high”. Research from money.co.uk has found that shoppers could emit over 386,243 tonnes of carbon emissions in 2021.

That is the equivalent of 215,778 return flights between London and Sydney, and the same weight as 3,679 blue whales.

In the UK, activists from across the country are taking part, with 13 blockades in Doncaster, Darlington, Newcastle, Manchester, Peterborough, Derby, Coventry, Rugeley, Dartford, Bristol, Tilbury, Milton Keynes and Dunfermline.

These sites account for just over 50 per cent of Amazon deliveries in the UK.

The aim of the protest is to disrupt Amazon’s business on what is one of the biggest shopping days of the year in order to force the global giant into changing its “highly climate-destructive corporate practices”.

The impact it has on the environment by pushing and delivering cheap goods has also previously come under fire. In 2018 alone, Amazon emitted 44.4 million metric tonnes of carbon dioxide — greater than the carbon footprint of Switzerland.

“Amazon promises us everything we want, anytime we want it, at the best price, all to make us happier,” says Anne Thoday, a grandmother and social worker from Derbyshire who is taking part in the action today.

“But in reality, they are manipulating us into spending money we don’t have to buy things we don’t need, using data they collect by spying on us.

“That’s why I’m here today: To tell people that a life without consumer manipulation, worker exploitation and planetary destruction is possible – and that it’s not an inconvenience, but a happier life.”

Action For Exploitation And The Environment

Amazon has also come under criticism for the treatment of its staff, with 1,000 ambulance call-outs to its UK depots since 2018 and 178 to its Tilbury site where a worker died this month.

Chris, a former Amazon employee from Newcastle, says that working for the company provided first-hand experience of how little they care about anything other than making money and how poorly workers are treated.

“With new warehouses popping up every month, taking action against Amazon has become an absolute necessity.”

Extinction Rebellion says the action is taking place on Black Friday in order to confront the exploitative and environmentally destructive business practices of one of the world’s largest companies.

Amazon’s business model has enabled massive growth. As its empire grows, so does its exploitation.

The group says that this major shopping event epitomises an obsession with overconsumption that is not consistent with a liveable planet. Amazon and companies like it have capitalised on our desire for convenience and stoked rampant consumerism at the expense of the natural world, trapping consumers inside a cycle of buying our way to oblivion.

“We can no longer live under a system based on manipulated overconsumption coupled with continued, destructive economic growth at a time of imminent ecological collapse,” Chris adds.

“Amazon’s business model has enabled massive growth. As its empire grows, so does its exploitation.”

The group is asking people to send the company a message today by cancelling their Amazon Prime membership. The action comes on the same day as Progressive International and multiple unions launch a global campaign called “Make Amazon Pay”.

“Today’s actions show the scale of resistance to Amazon’s exploitation at every link in its chain of abuse,” says Casper Gelderblom, Make Amazon Pay coordinator at Progressive International.

“Workers throughout the supply chain are demanding what’s rightfully theirs when even Jeff Bezos admits their labour paid for his recent joy ride to space.

“From Amazon’s fulfilment centres to its tech hubs, and from garment factories to call centres, workers are joining forces with activist allies to demand justice from a corporation that takes too much and gives too little.”

But it’s not just on Black Friday that activists are planning to disrupt Amazon and bring attention to the corporation’s list of “crimes”. Gelderblom says they’ll be keeping the pressure on until justice is delivered.

“This year, our strikes and protests stretch across all six inhabited continents. But we are only just beginning. We will continue to raise our voices even louder to Make Amazon Pay.”