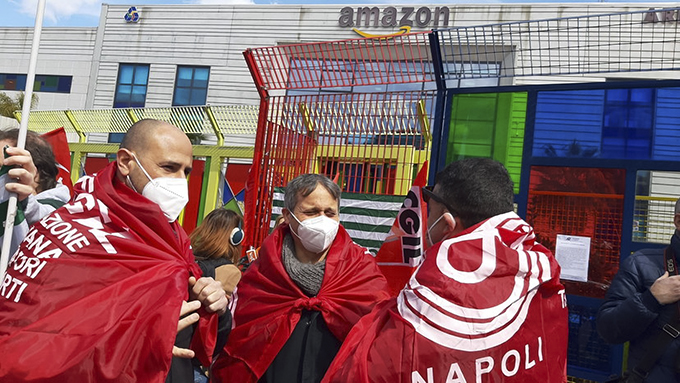 Above photo: When an employee comes to work at Amazon the employee entrance has a huge sign overhead: Work Hard, Have Fun, Make History – The Italians have modified that slogan for the Strike!

On Monday, March 22 workers throughout the Amazon logistics system went on a one-day strike in Italy. This is the first time in the world that there has been a nationwide/system wide strike against Amazon.

The Stansbury Forum interviewed Leopoldo Tartaglia from the SPI CGIL – Sindacato Pensionati Italiani – Italian Pensioners Union CGIL, about the strike, Amazon operations in Italy, and the particular features of the Italian labor movement.

Stansbury Forum (SF): Thanks Leo for helping us understand this historic national strike against Amazon. Can you please give us the basic details about the strike?

Leopoldo Tartaglia (LT): It can be said with certainty that the strike was successful, especially among the drivers where participation was around 75%, with peaks of up to 90%. This probably delayed a substantial chunk of deliveries on March 22, but of course it is impossible to know how many customers were unable to receive packages from Amazon. There are around 19,000 Amazon drivers in all of Italy. For the 9000 direct employees in the warehouses (fulfillment centers) and the delivery stations   participation was around 70-75% on average nationally, with peaks in the northern sites, and a little lower in the south of Italy. Among the 9000 temporary agency warehouse workers, participation in the strike was 25-30%, but that level was considered a positive by the trade unions given the total blackmail of these workers because their contracts are only temporary, and they have the minimum hope of having their employment renewed.

Even in the media, the strike was given great prominence. Newspapers, television and radio that rarely give coverage to workers’ struggles, were all over the strike and reported on the conditions of uber-exploitation and of excessive workloads both in warehouses and for the drivers. Some center-left parliamentary deputies have made demands on Amazon, and the Minister of Labor (Andrea Orlando del Democratic Party) has made it known that he intends to summon for talks Amazon Italia and Assoespressi, the employers’ association that groups together the delivery companies that work for Amazon. It is too early to see what other effects the strike will have. The three national trade unions, CGIL, Confederazione Italiana Sindicati Lavoratori (CISL) and Unione Italiana del Lavoro (UIL) aim to resume negotiations both with Amazon and Assoespressi to arrive at supplementary contracts that regulate schedules, shifts, work positions, stabilization of temporary workers. In recent months, meetings had been held with both Amazon and with Assoexpressi, but no agreements were reached, and the bosses were unwilling to continue negotiations.

SF: How long has Amazon been in Italy? How many facilities are there? What is the total employment – warehouse workers and drivers (independent contractors?).

LT: Amazon arrived in Italy in 2010 and has since invested over $5.8 Billion euros in building out its operations. There are now 8 fulfillment centers in Italy with two new centers scheduled to be opened in 2021 in Novarra and Modena. There are 2 sortation centers and 26 delivery stations for the last “kilometer”! Amazon employs 9,500 warehouse permanent employees, 2,600 of whom were new hires in 2021. Within the warehouse however there are temporary workers from temp agencies. Their numbers vary but by national labor agreements their total should not exceeed 15-20% of permanent employees. Union estimates are that there are tens of thousands of Amazon courier drivers throughout Italy. They are employed by independent contractors or are IC’s themselves.

In Italy, national collective bargaining agreements apply to all workers in the sector, regardless of whether they are members of the trade union or not. Normally, national collective labor agreements are signed by the trade federations of CGIL, CISL, UIL, which are the most representative organizations in terms of members and votes when electing Rappresentanze Sindicali Unitarie (United Trade Union Councils) in the individual workplace. In recent years, problems have arisen with what we refer to as “pirate contracts”, that is substandard contracts signed by employer organizations and minority unions but which, from a legal point of view, have the same value as those signed by the most representative unions, at least until someone appeals to the labor judge and the judge (sometimes) orders the company that has followed the “Pirate contract” to apply the one signed by CGIL, CISL, UIL.

SF: If they are already covered by national agreements, why are the workers striking? What are the demands of the unions in the strike? Was the strike successful? What are the next steps?

LT: There is a broad range of demands that the Unions are making, both for the direct employees and for the subcontractors. In fact, in recent years, at the local level, different agreements have been reached mainly to ameliorate the working conditions inside single warehouses and, in many cases, also to improve the salaries linked to local productivity, based on the minimums established by the national collective agreements.

Amazon has always refused to discuss with Unions the conditions of the subcontractors, mainly drivers, who are an essential part of the work force and of Amazon’s business model.

So, the strike was mainly motivated to force the company to act to improve the general working conditions of the subcontractors.

But the whole workforce’s conditions are at the core of the struggle. Here are some of their demands:

Reduction of fines penalties (damaged vehicles etc.)  and excessive working hours
Reduction of the working time for drivers
Bargaining on the organization of internal shifts and work rotation
Stable jobs for the fixed term and temporary workers
Full respect by the company for safety and health provisions, particularly considering the present pandemic.

SF: How do multiple unions in one facility work together or compete with each other? How does that impact bargaining?

LT: This issue exists on two levels: One is the relations among the single federations/confederations which usually are both of competition (to get new members, to win workers votes for the RSU’s, and to convince workers to choose the services offered by their confederation.) and cooperation, mainly through the RSU – Workplace Councils, for collective bargaining. Obviously, the bargaining is damaged by the lack of unity among Unions.

The second level is about the relations among federations who unionize different workers in the same facility (in the case of Amazon workers covered by national collective agreement of Logistics and those covered by the national collective agreement for temporary agencies). In this case, often, the different group of Unions, unfortunately, are working separately, despite the fact that everyone says that it is necessary to work together.

The March 22 strike was called by the three national federations: Cgil, Cisl and Uil. Both Amazon’s direct employees and the subcontractors – particularly drivers organized as self-employed, or by cooperatives, or both, were involved.

Also the strike was called for the temporary agency workers by the Cgil Nidil Federation (atypical workers), and the same federations of Cisl and Uil.

SF: What kind of support from US Amazon workers would be helpful?

LT: Any form of solidarity is welcome. I think in the medium term, through the Global Unions, it will be necessary to build international coordination of different Amazon’s national and local Unions all over the world.

SF: Are Italian Amazon workers talking about the union vote in Bessemer, Alabama?

LT: Frankly speaking I don’t think so. Unfortunately there is  big fragmentation of the working class, and it is  increased by the difficulties of information and language. I don’t know how many Italian union leaders are even aware of the Bessemer situation.

Peter Olney is retired Organizing Director of the ILWU. He has been a labor organizer for 40 years in Massachusetts and California. He has worked for multiple unions before landing at the ILWU in 1997. For three years he was the Associate Director of the Institute for Labor and Employment at the University of California.