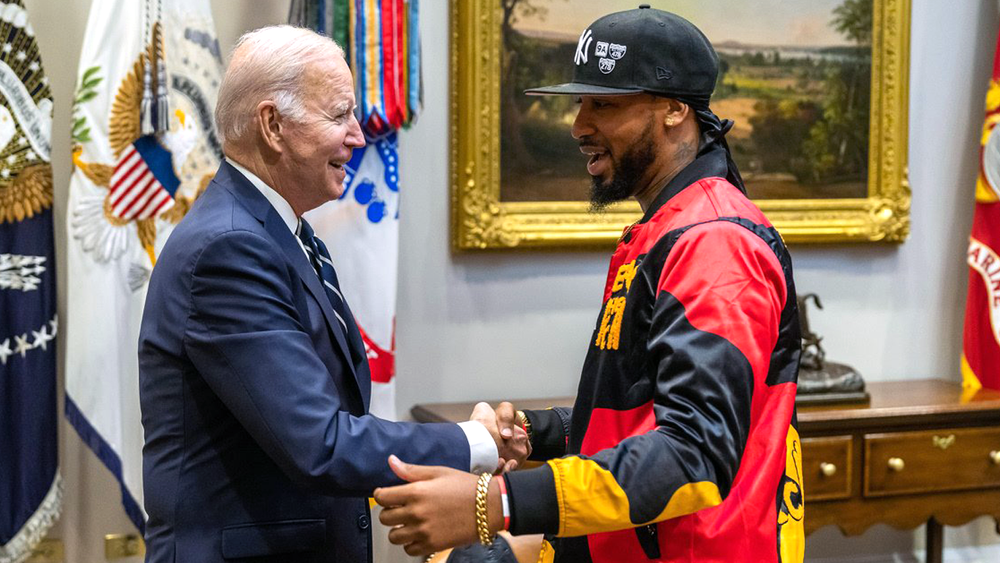 The president promised to halt federal contracts to union busters.

But the deal was just re-awarded to Amazon while the company was crushing a union drive.

The Biden administration has re-awarded a massive $10 billion federal contract to Amazon, even as the president is facing mounting pressure to fulfill his promise to halt such contracts to companies that refuse to remain neutral in union elections. The contract decision came as Amazon responded to its workers’ first successful union drive by busting the organizing drive that followed.

At issue is Biden’s 2020 promise to “ensure federal contracts only go to employers who sign neutrality agreements committing not to run anti-union campaigns.”

Amid revelations of Amazon’s aggressive efforts to shut down a union drive among its workers, Sen. Bernie Sanders (Ind.-Vt.) last month sent a letter to Biden “asking you to fulfill that promise… to make sure that federal dollars do not flow into the hands of unscrupulous employers who engage in union-busting, participate in wage theft, or violate labor law.”

A day later, Nextgov reported that Biden’s National Security Agency (NSA) ratified a $10 billion cloud computing contract for Amazon, which hired the brother of Biden’s top aide as a lobbyist days after the 2020 presidential election. The contract for the company’s web services division is codenamed “Wild and Stormy,” and is distinct from another massive Pentagon cloud contract on which Amazon is also currently bidding.

A few days after Amazon received the NSA contract, the Amazon Labor Union lost its second union election bid by a 2-to-1 margin at another Staten Island warehouse, after Amazon mounted a furious campaign to halt the organizing drive.

In effect, while Amazon was doubling down on its union busting, the Biden administration was delivering a massive federal contract to the company, signaling to Amazon executives that he is so far not interested in fulfilling his pledge to use the government’s purchasing power to be “the most pro-union president.”

Meanwhile in Congress, lawmakers are advancing legislation that could give Amazon new tax breaks and give $10 billion to company founder Jeff Bezos’s space company. Most Democratic senators also voted Wednesday to reject a measure from Sanders demanding that tech companies that receive government subsidies remain neutral in union elections.

Doubling Down On A Disputed Contract

Amazon first received the NSA contract from the Biden administration last summer, months after Biden pledged to make such deals contingent on union neutrality. But the contract was soon challenged by Microsoft, which alleged that its own competing proposal had not been properly evaluated.

In the interim, Biden could have signed an executive order to rescind such contracts for employers that do not remain neutral in union elections — but he has declined to do so.

Now, his administration has gone a step further, ratifying the lucrative contract even as Amazon has been making international headlines trying to stop union drives at the company, as well as fielding allegations that it has been violating labor law in the process.

The details of Amazon’s contract — and the dispute — will remain classified, due to an exemption in public records laws for national security.

Biden’s contract pledge underscored how much power federal, state, and local governments have in creating fair conditions for union elections. Major corporations rely on those governments for contracts and subsidies, giving public officials the power to make that money contingent on companies treating workers fairly.

The Amazon Web Services deal is a case in point. That division, which oversees its government contracting, fuels the company’s overall profits. Indeed, the company received double the amount of operating income from the division— $18.53 billion — as from the rest of its sprawling North American operations. If Biden — and state governments — predicate their contracts on Amazon remaining neutral in union elections, it would force the company to choose between union busting and massive profits.

That was the core of Biden’s 2020 campaign pledge.

“Today, I am renewing my request to President Biden to fulfill that promise,” Sanders said Thursday at a Senate hearing. “In my view, however, the time for talk is over. The time for action is now. Taxpayer dollars should not go to companies like Amazon who repeatedly break the law. No government — not the federal government, not the state government, and not the city government — should be handing out corporate welfare to union busters and labor law violators.”

Also on Thursday, Amazon Labor Union President Chris Smalls reported that during a White House visit, Biden had told him that Smalls had “gotten [Biden] in trouble.”

Biden was likely referring to his statement in April to a union group where he said “Amazon, here we come” — a statement that Press Secretary Jen Psaki walked back almost immediately.