“We have been bombarded with misinformation and lies for the past month in the bathrooms, break rooms, at the entrance,” Amazon JFK8 Staten Island worker Natalie Monarrez.

New York City – On the heels of Amazon’s scorched earth, and likely illegal, union-busting campaign in Bessemer, Alabama that defeated workers’ attempt to unionize, Status Coup has obtained photos from inside Amazon’s Staten Island warehouse, known as JFK8, that show the company’s aggressive union-busting in the face of efforts by current and former workers trying to form a union.

The union drive organizers, who have formed Amazon Labor Union [ALU], recently filed a complaint with the National Labor Relations Board after Amazon erected a chain-link fence around the warehouse parking lot in order to force the ALU organizers to a location with less foot traffic–seemingly to prevent them from getting workers to sign a union card.

At one point, the fence had a “Beware of Dog” sign up (not clear what dogs folks needed to be aware of).

But Amazon’s union-busting is even fiercer inside the warehouse, submerging workers with anti-union visuals throughout their 10-12 hour workday.

“We have been bombarded with misinformation and lies for the past month in the bathrooms, break rooms, at the entrance,” Amazon JFK8 Staten Island worker Natalie Monarrez told Status Coup on Wednesday outside the warehouse as ALU workers attempted to hand out union cards to workers coming in and out of their shifts. 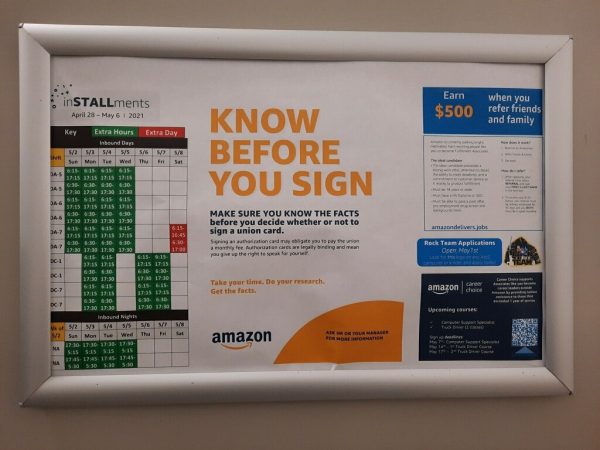 On the wall is a “Know Before You Sign” billboard, referring to what workers should know before they sign their name to a union card, which serves as organizers’ main measuring stick in terms of workers’ interest in possibly unionizing.

“Signing an authorization card may obligate you to pay the union a monthly fee,” the billboard goes on to say. The messaging escalates to all-out fear-mongering and in some cases, straight-out lies, like the following: “Authorization cards are legally binding and mean you give up the right to speak for yourself.”

An alternate version of the same “Know Before You Sign” billboard places a “We’re increasing your pay!” notice next to the anti-union messaging. The pay increase is an increase of 50 cents to $1.50 an hour starting May 16 “depending on eligibility.”

Monarrez sarcastically told Status Coup outside the warehouse on Wednesday as organizers handed out union cards to workers.

Other messaging tells workers “We are here for you” and urges them to reach out to your manager of HR immediately. “We want to hear from you and work with you.”

But, if you talk to actual workers, going to HR is a one-way trip to nowhere—even during a pandemic.

“I went to HR [in March 2020] and said there’s a senior citizen I work with who has diabetes; she’s more vulnerable to this COVID, so can I get her an N95 mask because I know you guys have them here because all of HR, the executives, and managers had N95 masks on. And the HR representative just looked at me and without even hesitating said ‘we’re not giving them out to the workers, you have to have a doctor’s note.’”

Other anti-union messaging posted inside the warehouse say “don’t be fooled by the vest,” referring to yellow union vests ALU organizers are wearing outside as they attempt to talk to workers and get them to sign union cards. 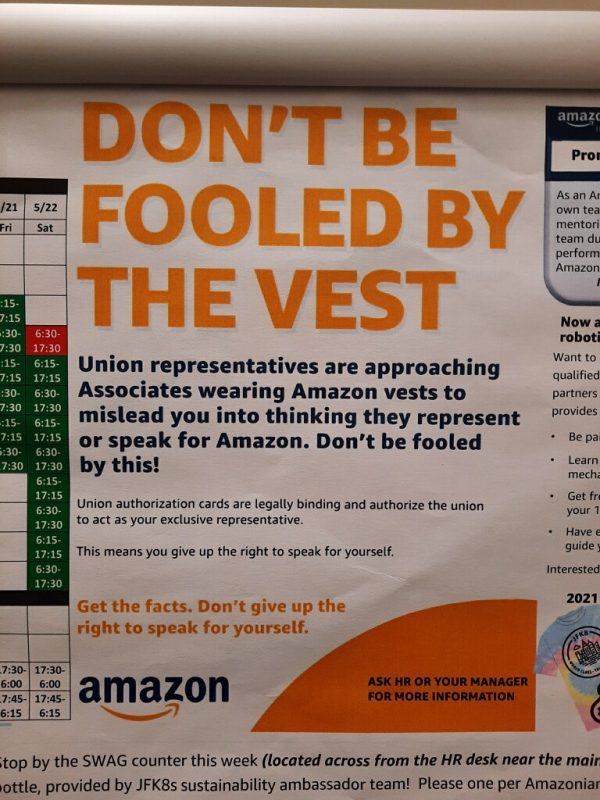 That poster added: “Union representatives are approaching Associates wearing Amazon vests to mislead you into thinking they represent or speak for Amazon. Don’t be fooled by this!”

Derek Palmer, an ALU leader and Amazon JFK8 Staten Island worker, called out Amazon’s fear-mongering, telling Status Coup: “They’re trying to say we’re misleading people and misleading associates which isn’t true at all. I’m just showing them how long I’ve been here and the amount of work I’ve put in so associates will relate to that.”

Palmer continued: “I just think it’s sad that they underestimate the intelligence of their workers while trying to make more vulnerable employees paranoid. It comes off as desperation.”

A smaller sign says “Don’t Be Misled” with an additional fear-mongering tactic that suggests ALU organizers might bother workers outside of work.

“Organizers may even call you or try to visit your home!” the sign reads, adding that “no leader from Amazon will ever approach you outside of work or ask you for personal information and signature.”

Another smaller sign reads “Protect Your Signature,” adding that workers should “know who you are talking to and what you are signing before you sign something.”

The anti-union signs have also been put up in the bathrooms, leaving workers with no real area to go without being targeted by the anti-union onslaught.

Amazon’s anti-union campaign also attempts to cast doubt on the financial integrity of The Congress of Essential Workers [TCOEW], a group started by fired Amazon worker Christian Smalls that is separate from ALU that consists of current JFK8 Staten Island workers.

“TCOEW’s lack of financial accountability should matter to you,” a TV-screen message says, adding that ALU’s website says “union dues will be taken from each paycheck, equal to roughly one hour’s wages” if they are able to successfully unionize.

“We used all donations to organize against them all year they seem to have forgot that,” Christian Smalls, founder of TCOEW, told Status Coup.

The heavy anti-union campaign inside the warehouse during the early stages of ALU’s union drive is certainly a sign of things to come if the organizers develop momentum. Unlike Alabama, New York is a fairly strong union state; in 2020, 22 percent of workers were unionized as opposed to a measly eight percent in Alabama.

There also seems to be stronger labor cops on the beat judging by New York Attorney General Leticia James’ lawsuit against Amazon for its “flagrant disregard” of worker safety during the COVID-19 pandemic and for illegal retaliation against Christian Smalls for trying to organize workers to obtain safer working conditions.

You can watch our full livestream interviewing Amazon workers outside the Staten Island warehouse here.