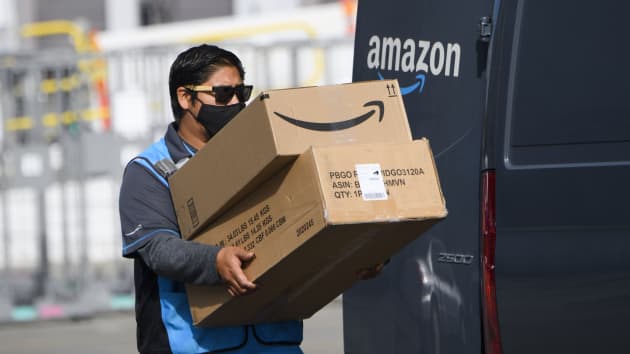 Above photo: An Amazon.com delivery driver carries boxes into a van outside of a distribution facility on February 2, 2021 in Hawthorne, California. Patrick T. Fallon | AFP | Getty Images.

Amazon drivers at some U.S. facilities will soon have an extra set of eyes watching them when they hit the road to make their daily deliveries.

The company recently began testing AI-equipped cameras in vehicles to monitor contracted delivery drivers while they’re on the job, with the aim of improving safety.

Amazon has deployed the cameras in Amazon-branded cargo vans used by a handful of companies that are part of its delivery service partner program, which are largely responsible for last-mile deliveries. The cameras could be rolled out to additional DSPs over time, and Amazon has already distributed an instructional video to DSPs, informing them of how the cameras work.

Deborah Bass, an Amazon spokesperson, confirmed to CNBC that the company has begun using the AI-equipped cameras across its delivery fleet. Some details of Amazon’s plans were previously reported by The Information.

“We are investing in safety across our operations and recently started rolling out industry leading camera-based safety technology across our delivery fleet,” Bass said in a statement. “This technology will provide drivers real-time alerts to help them stay safe when they are on the road.”

DSPs are contracted delivery providers, usually distinguishable by Amazon-branded cargo vans, responsible for picking up packages from Amazon delivery stations and dropping them off at doorsteps.  The program, launched in 2018, has allowed the company to quickly scale up its last-mile delivery capabilities and compete with shipping partners such as UPS and FedEx.

Amazon’s DSP program has faced criticism for lax safety protocols in the past. Investigations by NBC News, ProPublica and BuzzFeed News identified safety issues and described poor working conditions at some DSPs, based on interviews with drivers and former Amazon employees.

The cameras could help improve safety, but privacy advocates and several DSP drivers said they’re concerned about potential privacy tradeoffs. The drivers, who asked to remain anonymous out of fear of retaliation from Amazon, described the cameras as “unnerving,” “Big Brother” and “a punishment system.”

Some drivers said they’re concerned the AI-equipped cameras will add further pressure to a job that already involves an intense workload of delivering hundreds of packages a day.

Footage collected by the cameras can be used for employment decisions, according to a privacy policy issued by Amazon in accordance with the cameras. The drivers told CNBC they’re subject to disciplinary actions, up to firing, depending on the severity of the safety infraction logged by the camera.

“I don’t think [Amazon] even knows yet all the ways they will use the video that is collected by these devices,” said Evan Greer, deputy director of the digital rights group Fight for the Future. “It just means that every Amazon vehicle will now also be an Amazon surveillance camera. And right now there are essentially no laws in place to govern what Amazon can do with all that footage once they collect it.”

Had to split it into 3 parts. Here's part 2. These cameras will not only monitor Amazon drivers but also constantly record video to the front and both sides of the vehicle, and analyze it with AI. Amazon says openly they plan to use it to "investigate" things like "package theft" pic.twitter.com/bX1Jn5YeZJ

Amazon already has more than 2,000 surveillance partnerships with police departments across the U.S. It seems almost certain that they will create easy ways for to share the footage they collect from their fleet of vehicles with law enforcement agencies. https://t.co/1yPeN8YXPW

In the instructional video, which was seen by CNBC, Amazon says the cameras record “100% of the time” when drivers are on their route.

Amazon is using an AI-powered camera made by Netradyne, a San Diego-based start-up that was founded in 2015 by two former senior Qualcomm employees. The camera, called Driveri, has four lenses that capture the road, the driver, and both sides of the vehicle. Netradyne did not immediately respond to a request for comment.

The cameras are equipped with artificial intelligence software capable of detecting 16 different safety issues, including if drivers fail to stop at a stop sign, distracted driving, speeding, hard braking and whether the driver is wearing a seatbelt. One DSP driver in Kentucky said the cameras can also detect when a driver is yawning.

Certain safety violations will cause the camera to issue an audio alert, such as, “Maintain safe distance,” “No stop detected,” and “Please slow down,” according to the video, which is narrated in part by Karolina Haraldsdottir, a senior manager for last-mile safety at Amazon.

“Safety is our top priority at Amazon and it’s our hope that this new system will give drivers and DSPs peace of mind while out delivering smiles to our customers,” Haraldsdottir says in the video.

When the camera detects that an employee is engaging in unsafe driving behavior, it triggers the camera to upload footage to a “secure portal” that’s accessible by Amazon and the DSP. An Amazon spokesperson didn’t respond to questions asking how the footage is secured.

Drivers have some control over the camera, which doesn’t record audio. A button on the camera allows drivers to upload footage manually, and drivers can turn off the cab-facing cameras when the ignition in their van is switched off, allowing for some privacy during their lunch break or while making a phone call.

While Amazon maintains that the camera doesn’t provide Amazon or DSPs with a “live feed,” certain safety triggers flagged by the camera in real time may cause Amazon to reach out to the driver while they’re on the road.

For example, if a driver is caught yawning, the camera will instruct them to pull over for at least 15 minutes, the Kentucky driver told CNBC. If the driver doesn’t comply, they may get a call from their DSP asking them to pull over, they added.

Amazon can also use the footage for more than just enforcing safety measures. In the video, Haraldsdottir also explains that the footage can be used in incident investigations. This could include things like collisions with other vehicles or pedestrians, as well as package theft.

“Video footage can be one of the best tools for getting facts about a situation quickly,” Haraldsdottir says in the video, before it cuts to a scenario where Driveri footage was “used to exonerate a driver from blame in safety incidents.”

The privacy policy states that footage can be handed over to law enforcement or used as evidence in legal proceedings when necessary.

Amazon isn’t the only logistics company relying on this technology. Last year, UPS tested forward-facing cameras equipped with sensors that issue safety alerts in vans in several cities as part of a “initial proof of concept” trial, said UPS spokesperson Dan McMackin. The test drew some pushback from the Teamsters labor union.

The AI capabilities are equally concerning, experts say, given that it allows Amazon to rely on software to review the footage at scale, which has the potential to produce errors in judgment.

Additionally, previous research on AI systems have shown the technology presents racial and gender bias, such as Gender Shades, a landmark 2018 study that revealed facial recognition technology is highly inaccurate for Black people.

“When you layer a surveillance technology on top of a system that’s already discriminatory, it sort of automates, amplifies, exacerbates that discrimination, without rules in place to protect workers,” Greer said.

DSP employees who may have been uncomfortable with the technology weren’t given an opportunity to opt out, one Amazon driver in California, who asked to remain anonymous, told CNBC. The driver was required to electronically accept the terms and conditions to have the camera installed, “otherwise I would not be able to work for Amazon,” they said. CNBC obtained a copy of the terms and conditions that were sent to the driver.

Greer said the AI-equipped cameras send a message to workers that they can’t be trusted.

“It sends this message of we don’t trust you, we are watching you,” Greer said. “That just strikes me as wrong.”