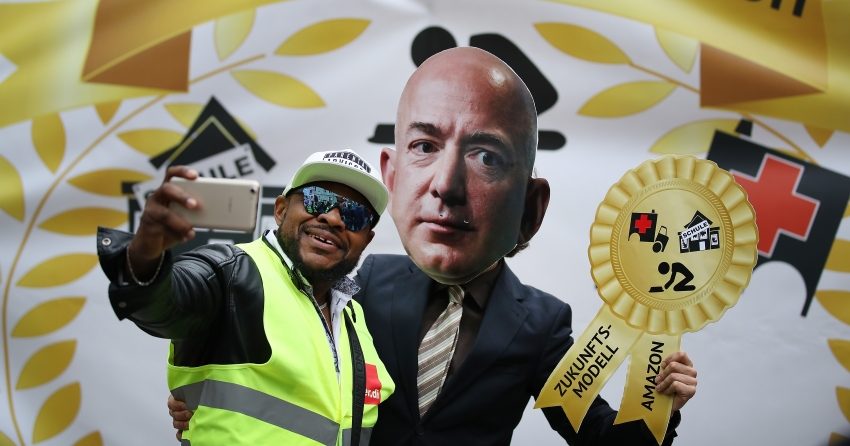 Above photo: An Amazon warehouse worker shoots a selfie with an activist dressed as Amazon CEO Jeff Bezos during a protest gathering outside the Axel Springer building on April 24, 2018 in Berlin, Germany. Sean Gallup/Getty Images.

Amazon worker organizing is going international. A new coalition of Amazon employee activists from Spain, France, German, Poland and America has announced itself with a list of demands for improved pay and safety—and they say that this is just the beginning.

The new group, called Amazon Workers International (AWI), is a significant new formal attempt to combine the well-established labor activism of Amazon workers in Europe with the grassroots organizing that has targeted Amazon in America in recent months. The group’s letter, sent to CEO Jeff Bezos and Stefano Perego, the VP of Europe Customer Fulfillment, asks the company to lock in temporary gains that workers have made during the pandemic, and for broader improvements in Amazon’s historically poor relationship with its warehouse workers. Among the demands in the letter: making permanent the wage increases and extra break time instituted in response to the coronavirus crisis; granting two weeks of paid sick leave, and extending the unlimited unpaid sick leave program that the company just ended in the U.S.; working in good faith with unions; reinstating the workers who have been fired for their activism; and ending “all forms of casual and temporary employment,” which the group calls an abuse of corporate power.

“At a time when officials and employers are attempting to return to a false sense of normalcy, Amazon—which profited during this period—could set a standard of prioritizing the health of its workers and the public. Instead, you continue leading the race to the bottom,” the letter says. “We demand that you stop treating essential workers as disposable and that you start cooperating with those advocating otherwise. Stop firing and start listening.”

Asked for a comment on the letter’s demands, the company did not respond directly to the points raised by AWI. Instead, a spokesman cited recent pay increases, along with increased cleaning, social distancing, masks and other safety measures the company has introduced, and said, “We encourage anyone interested in the facts to compare our overall pay and benefits, as well as our speed in managing this crisis, to other retailers and major employers across the country.”

One of the Americans working with AWI is Christian Zamarron, an Amazon warehouse worker in Chicago who helped to lead walkouts over unsafe working conditions last month. Zamarron has seen the power of European Amazon worker organizing firsthand—he traveled to gatherings of the company’s worker activists in Germany last October, and in Madrid in March. “Unity is growing. Coordinated international campaigns will start more and more,” he says.

Such organizing has deeper roots in Europe, where labor laws are more friendly, unions are often more powerful, and political expectations of corporations are higher. (In France last month, unions managed to get a court order that forced Amazon to suspend its operations in the entire country over charges of inadequate workplace safety.) Zamarron says his European counterparts have learned as they go—for example, workers in Germany have learned that they need to act in solidarity with Polish workers, or else the company will simply shift German warehouse operations over to Poland when there are any disruptions.

The European workers involved in AWI, who responded to questions as a group, have been sharing ideas across national borders since 2015. While they are realistic about the task ahead of them, they say that international collaboration is a necessity when trying to change an international behemoth like Amazon. “What we learned in our many years of struggle is, that if you want to organize at Amazon, you will have to think long term, build a broad base of workers who stand behind the cause and are willing to take action. You have to be prepared to take more defeats than earning victories,” they say. “And it should be clear, that this struggle can’t be won only in one country or even in one facility. The Amazon management quickly learns how to counteract organizing activities, so you have to be able to spontaneously react to this.”

They say that they eventually hope to expand AWI and bring in Amazon workers in Asia and in Latin America, as well. And while they fully expect the company to try to ignore their efforts for as long as possible, they know that in Europe they have already won the PR battle. “A good reputation is very important to them,” they say. “In Germany and other European countries the reputation is very bad. The company is sometimes even the synonym for bad working conditions.”

Even as the coronavirus has shut down businesses across the world, Amazon—perfectly positioned for a world of stay-at-home orders—has boomed so much that Jeff Bezos has gotten more than $20 billion richer this year. But the crisis and its profits have also brought a spasm of protests and walkouts, and a deluge of bad press over the company’s retaliatory firings and smear campaign against workers who spoke out.

Labor unrest is not a niche issue for the trillion-dollar company. The “safety strikes” at Christian Zamarron’s workplace were not isolated to a handful of people—they included a majority of the employees on the shift. After seeing hundreds of his coworkers sign petitions and take actions already, Zamarron is optimistic that an international movement can actually work. “Everything has to start somewhere,” he says. “It’s learning from each other, and how we tackle each of our situations. We have very similar problems.”

Hamilton Nolan is a labor reporter for In These Times. He has spent the past decade writing about labor and politics for Gawker, Splinter, The Guardian, and elsewhere. You can reach him at Hamilton@InTheseTimes.com.