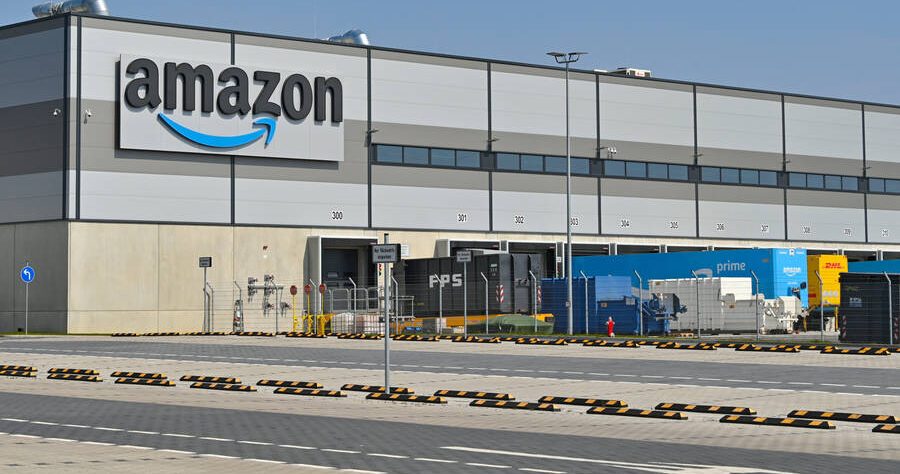 Amazon Warehouse Workers Walk Off The Job In Illinois

Capping Off a Year of Labor Action at Amazon.

For the first time, Amazon is experiencing a multi-site U.S. work stoppage. It comes at the end of a year marked by union organizing and labor militancy at the retail giant.

Coming just three days before Christmas to ensure maximum impact, the action caps a year of intense organizing and protest by Amazon warehouse workers who have been on the frontlines of both the Covid-19 pandemic and extreme weather events.

Organized by the labor network Amazonians United, the walkouts occurred during the morning shifts at the company’s DIL3 facility in Chicago’s Gage Park neighborhood and at the DLN2 warehouse in the nearby town of Cicero.

Miin told In These Times that at his warehouse in Gage Park, 65 out of an estimated 100 workers signed onto a petition demanding a $3‑per-hour raise and safe staffing. The petition was delivered to management a month ago, but the workers never received a response. ​“They’re not taking us seriously, so we’re walking out,” he said.

At the DLN2 delivery station in Cicero, Miin explained that management explicitly promised double-pay for those working on Thanksgiving, but only gave one-and-a-half time pay. He also said that new hires at the facility did not receive a promised $1,000-dollar sign-on bonus.

“We have not received the bonuses we were promised. There are people here who were hired as permanent workers, and then they took their badges away and made them temporary workers,” one Cicero worker told reporters on Wednesday. ​“They are staffing this place unsafely, making people work too fast.”

The Cicero workers say they are demanding a $5‑per-hour raise and a return to 20-minute breaks, alleging managers recently reduced their break time by five minutes.

“We’re willing to go back to work. We will work hard to make sure everyone gets their Christmas gifts, everyone gets their packages. But we just want to be treated fairly,” another Cicero worker explained. ​“This is the busiest month of the year. If Amazon can meet our demands, treat us right like human beings, we will make everybody’s Christmas a beautiful one.”

Asked for comment about the workers’ allegations, Amazon senior PR manager Barbara Agrait told In These Times: ​“We respect the rights of employees to protest and recognize their legal right to do so. We are proud to offer employees leading pay, competitive benefits, and the opportunity to grow with our company.”

The walkouts come as Amazon’s safety policies are under scrutiny after six workers were killed when a tornado ripped through a delivery station in Edwardsville, Illinois on December 10. Following that tragedy, at least 500 Amazon employees on the East Coast signed petitions calling for an end to the company’s ban on workers bringing their cellphones into warehouses, which limits their ability to get updates about severe weather events or other emergencies.

Amazonians United is a solidarity union of Amazon workers scattered across the country, functioning as a union but without seeking legal recognition through the National Labor Relations Board (NLRB). Since 2019, its members have organized petition campaigns and work stoppages to successfully win paid sick leave, pay increases and safety measures.

By not seeking legal recognition, Amazonians United’s strategy is decidedly different from that of established unions like the Retail, Wholesale and Department Store Union (RWDSU), which lost a high-profile union certification vote at an Amazon warehouse in Bessemer, Alabama this spring but will get a revote after the NLRB found that the company illegally intimidated workers during the election.

“We are a union. We’re a solidarity union. We take care of each other,” Miin said of Amazonians United, contending that in the legal realm of NLRB certification votes, the company has more power because it can hire high-priced lawyers and union busters. ​“We’re focused on building power where we have power, which is on the shop floor. Our union is our relationship with each other as coworkers. We build our union by engaging in struggle.”

The Chicago-area walkouts are supported by Warehouse Workers for Justice (WWJ) — a worker center based in Joliet, Illinois that also organizes and advocates for Amazon employees.

“Just one week ago we saw the high cost of Amazon’s relentless pursuit of profit in the tragedy in Edwardsville, Illinois,” said Marcos Ceniceros, WWJ’s interim executive director. ​“Since then, Amazon hasn’t slowed its pace at all and is putting workers’ health on the line every day with no regard for their lives or livelihoods. We stand in solidarity with Amazonians United as they fight for the fair and safe working conditions we all deserve.”

Wednesday’s work stoppage was expected to last at least until the end of the morning shift, and Miin said he and his coworkers would wait to see management’s response before deciding on next steps. Employees at the Cicero facility allege that supervisors made illegal threats not to allow them back to work, but that they plan to return anyway.

“We know we’re being treated unfairly, and we’re doing something about it,” Miin explained, hoping other workers would follow Amazonian United’s example. ​“If we can in any way be encouragement or inspiration for others, we want our coworkers and all workers to see that we can get organized, we can fight back — and that when we fight, we win.”