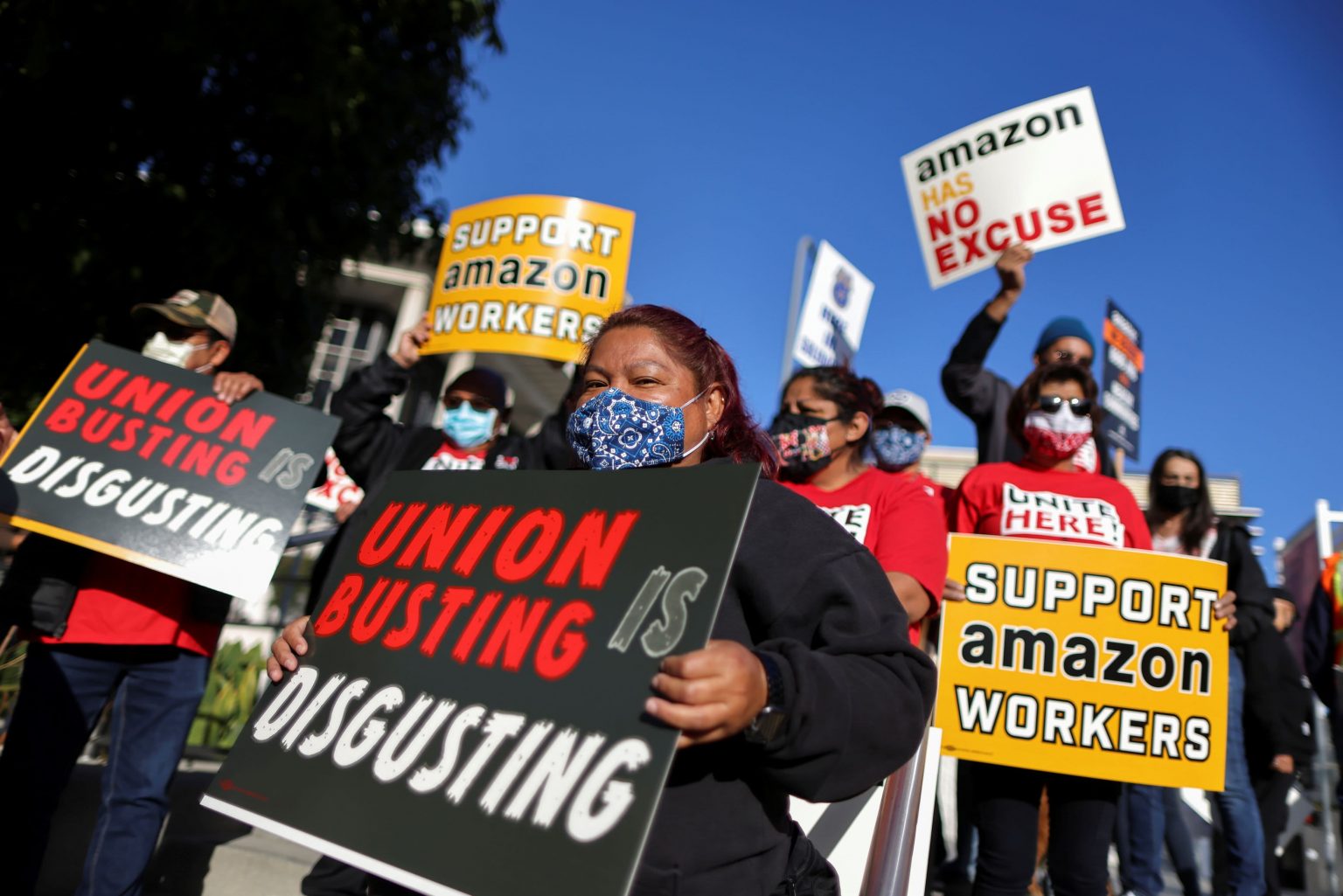 Amazon hasn’t recognized the Amazon Labor Union and, like Starbucks, is continuing to union bust and fire organizers.

On April 1, the Amazon Labor Union (ALU) achieved a historic victory when 55 percent of workers at a Staten Island warehouse voted to form the first Amazon union in the United States. The news shook the labor movement around the world as millions celebrated and the victory of these hyper-exploited workers against one of the richest men in the world.

Amazon has still not recognized the union, and has been trying to challenge the election results. In doing so, the company is delaying the start of the negotiation process for a first contract. The union busters who harassed thousands of workers at the JFK8 warehouse moved on to LDJ5, which is five times smaller, to prevent a second victory for ALU. As if this were not enough, Amazon is firing pro-union workers and organizers.

One of the most outspoken pro-union workers during the union drive was Alicia Johnson, a 56-year-old Black immigrant who lives in the deep Bronx and worked at JFK8 as a Picker Packer. Her commute to work took more than two and a half hours, after which she worked her 12 hours night shift and did the same commute again to get the little rest that this grueling schedule allowed.

She wasn’t new to unions; she used to work in a unionized hospital. Based on that experience, she believed that unionizing Amazon would provide job security and improve working conditions, allowing more sick and vacation days, more breaks — in short, help her be treated as a human. So she didn’t hesitate to express her support for the union. She was brought to a captive audience meeting with the union busters just once, compared to her coworkers who went multiple times. As she spoke out against their lies, they thought it would be better to keep her out of those meetings.

But when Alicia asked Amazon HR to secure a workplace accommodation for her leg injury — a basic right guaranteed to workers — she was fired, despite bringing the required medical documentation. Amazon’s excuse was a supposedly low rate of productivity, based on algorithms made by high-tech machinery designed to treat workers like robots, not people. Amazon claimed she had been written up multiple times, but she had never heard of these write ups. Alicia knew what was happening: this was a clear case of retaliation.

Another pro-union worker from JFK8 who was recently fired was ALU organizer Tristan “Lion” Dutchin. He is a 27-year-old son of a Guyanese family who lives in Crown Heights, Brooklyn. Like Alicia and thousands of workers from the Staten Island facility, his commute exceeds two hours. In a previous interview, he explained, “The day Amazon fired me, they had me work almost the whole day then sent me home, telling me not to return. Even when targeting me, they made sure to get every last bit of work out of me that they could.”

Tristan spoke out in favor of the union inside the warehouse and to his co-workers. He was also a well-known public face of the union — he spoke at rallies and gave interviews, and you can find many pictures of him in ALU-related articles. Like Alicia, he is confident that his firing was retaliatory.

Other workers, union organizers, and supporters were also fired for organizing, including Mat Cusick, James O’Donnell, and Gabby Rivera. This is not the first time this happens at the Staten Island Amazon facilities: two years ago, the company fired the main ALU organizers, including Chris Smalls, Jason Anthony, and Gerald Bryson.

The retaliation against workers who are organizing is not only happening in Staten Island — it is Amazon’s nationwide policy. According to More Perfect Union, Amazon is penalizing workers who staged a walkout in Shakopee, Minnesota. In a warehouse in Liverpool, New York, a couple who both are organizers suffered retaliation. Ashley Mercer told VICE she was transferred to work alone cleaning parking lots and her partner, Jason Main, was suspended and later terminated him for “not using a step stool to move totes full of merchandise.” Ezra Hudson in Bessemer, Alabama was also fired and his co-workers protested at HR on April 30 in response.As Jacobin explains, union busting at both Amazon and Starbucks is getting worse, and the National Labor Relations Board (NLRB) is doing almost nothing to stop it. As Amazon worker Most Daly told us, “We voted for the union, but the labor board hasn’t even recognized the union. That’s not right.” The NLRB gave Amazon a chance to have a hearing to challenge the recent elections, which is happening on May 23.

Beyond these targeted terminations, Amazon fires people constantly, and the company’s pace of work and lack of time to rest makes the job grueling and hard to keep up with in the long term. But we should not normalize those firings either — these back-breaking productivity rates are organized around profits and not human bodies. They want to take the last drop of sweat out of our labor.

A recent article published in City & State NY points out that across the country, Amazon warehouses saw a spike in injuries last year, but the increase is even higher in New York. Annie McDonough explains:

Amazon’s signature productivity metrics – measuring workers’ “rate” and “time off task” – are used to increase efficiency and keep up with the rapid rate of delivery that Amazon offers. But failure to meet those quotas have resulted in discipline for workers, and critics have said those quotas lead to a dangerous work environment that encourages employees to sacrifice safety for productivity.

The grueling working conditions also achieve the goal of generating insanely high turn-over rates, which makes organizing a gargantuan task. To prevent new Amazon facilities from unionizing, the company cracks down on organizing efforts before they grow. On Staten Island, the goal is to weaken ALU in their fight for union recognition and a first Amazon contract.

Corporations won’t let Generation U easily challenge their multibillion dollar profits. That’s why they are also attacking union organizers from the other national high-profile unionizing processes, like Starbucks. Retaliatory firings across the U.S. include the Memphis 7; Michael Vestigo in Overland Park, Kansas; Billie Nyx at the Maple St. store in New Orleans; Laila Dalton at the Scottsdale & Mayo Store in Arizona; Daniel Rojas in Buffalo; and others.

The struggle to unionize more workplaces and fight for new contracts will be met with many obstacles that will be needed to be fought back. Fighting against union busting, retaliation, and firings will strengthen every worker who is organizing to improve their working conditions and have more power in the workplaces. This struggle will also show the way forward for every worker who is thinking of organizing their own workplace.

We must show our strongest solidarity with the fight against union busting, and defend every worker from retaliation.