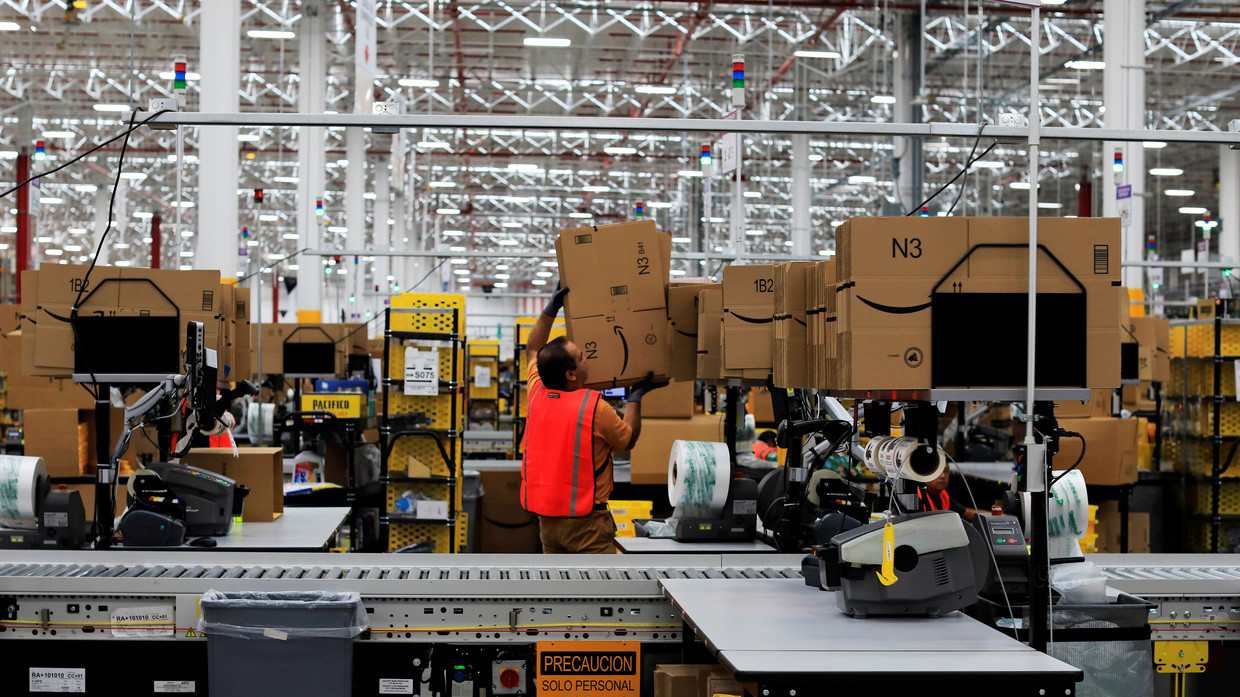 Above Photo: An employee is seen at the new Amazon warehouse during its opening announcement on the outskirts of Mexico City, Mexico July 30, 2019. Picture taken July 30, 2019. Carlos Jasso/Reuters.

Amazon and its hyper-neoliberal cheerleaders are polishing turds again. Jeff Bezos, the billionaire spaceman, and his company are about to ‘lift the working class’ by creating new ‘factory towns,’ Bloomberg writes.

“Plentiful new jobs at higher wages in places with cheaper housing sounds like a solution to inequality,” investment adviser Conor Sen wrote in a piece for the news agency.

Bloomberg and Amazon are putting such a shine on this idea, it reminds me of those Victorian texts where the working class living on the master’s land would bow and doff their caps every time his carriage passed them on their way to a 14-hour shift in his mine or mill.

Old books are full of those cheery commoners thanking landlords and industrialists for allowing them to live and work in poverty. Have we really come full circle?

Bloomberg believes that Amazon (yes, Amazon) has the solution to the problem of the ‘lower class’. Apparently, “the campaign against economic inequality has put a bullseye on cities” because local governments are being encouraged to raise minimum wages in the US and build more housing – what rotters! Raising wages and building houses is the real problem, according to Bloomberg, which is why cities have an overflow of ‘lower classes’.

According to Bloomberg, Amazon has the solution through new types of communities: burgeoning ‘factory towns’ built around Amazon warehouses. These are reached via glittering new highways that lead away from cities and the wealthy; towards places where it’s cheaper to build, buy and rent housing. What a fantastic idea, Bloomberg and Amazon! No one has ever done that before!

In my home county of Nottinghamshire, Bestwood Village – made famous by D.H. Lawrence in his novel ‘Sons and Lovers’ – has what was called ‘a model village’. There are many ‘models’ all over Nottinghamshire where the mines once were. The older ‘models’ were usually built by the mine owners and other industrialists. They all followed the same blueprint: rows of cheap, two-up-two-down workers’ cottages, usually a church, sometimes a school and, in the mining communities, always a pub and a grocery shop – all owned by the industrialist.

John Steinbeck in ‘Grapes of Wrath’ wrote about similar ‘company towns’ where fruit pickers lived in California – all rents and groceries were paid to the landowners or the mine owners who had full monopoly over the workers’ pay.

In parts of Derbyshire and Lancashire, during the last industrial revolution in the UK, there were similar ‘mill towns’ where industrialist mill owners held all the means of production, all of the property, and the food.

Let me remind or even teach Bloomberg that this was not a good thing for the working class, it was not a hand up for the poor. What was happening then was extreme exploitation, capitalism at its most successful. The land owners, and those who owned the means of production, had complete control over the working class.

In Bestwood Village, it is noted that the socially progressive Duke and Duchess Beauclerk saw the poor condition of the miners’ families living in a corner of their land in the 1880s. The Duchess kindly used her social contacts and great organisational abilities to raise money for a school in the village. But they didn’t even pay for it themselves; they went cap in hand to their rich mates.

When the Duke died, apparently the route of his funeral procession was filled with mournful and grateful miners and their families. The reality and the rhetoric were, of course, completely different, and the reality remained grim – the miners and the mill workers continued to live in squalor and work in dangerous conditions until the mills closed and the mines were nationalised.

There was no quaint ‘village life’ – just poorly educated, poorly paid people living in poverty while landowners grew fat and their lackeys behind the desk learned how to stretch out their middle-class bureaucratic elbows.

There were exceptions, though. The Quaker chocolatiers, the Cadbury family, created their own ‘factory town’, Bournville Village on the southwest side of Birmingham, England, which was completely different from the model villages in mining communities. The housing there was exceptional for the time, with the managers of the factory and the Cadbury family themselves all living in the village with the workers. Of course, the workers were expected to be godly and good, and no alcohol was allowed.

Milton Hershey, an American philanthropist, humanitarian and the owner of Hershey’s chocolate also provided workers at his factory in Pennsylvania with decent housing, social spaces, green lawns and free schooling for the children of the workers.

However, these two examples are exceptions and both were relatively short-lived social experiments. Besides, life in these model villages wasn’t ideal as there was a strong moral code forced on the workers in Bourneville and Hershey.

What has happened since Amazon moved out of cities, into the Rust Belts of America and deindustrialised communities in the UK, is not a new form of community or a new type of ‘factory towns’.

In the UK, workers in Amazon’s large warehouses literally live in the same cottages that miners once occupied, but now these buildings are over 100 years old, full of damp and owned by private landlords. The highways are soulless A-roads with no bus stops or pavements, just warehouses flanking either side as lorries thunder up and down, 24 hours a day. The communities with social clubs and gyms that were created through workers’ cooperatives and trade unions are long gone.

These are not places that can save the ‘working class’. They are places of exploitation – new satanic mills where those who have been socially cleansed from cities are forced, and where the only hope of the existing working-class population is a 12-hour shift at Amazon.