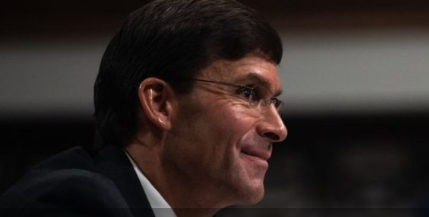 Above Photo: From Defense.gov

Always working a little harder than most to stay a step below reality, US Secretary of Defense Mark Esper made especially candid remarks this week that America’s INF pullout was timed for a targeting of forces against China.

Speaking to Fox on August 21st, Esper said: “We want to make sure that we, as we need to, have the capability to deter Chinese bad behavior… China is the number one priority for this department. It’s outlined in the national defense strategy, why we think it’s a long term strategic competitor and one that is pursuing a maximization campaign, if you will, throughout the indo-Pacific theater, whether its politically, economically or militarily…”

While American military exercises in the Pacific have played out on China’s doorstep at an accelerating rate since the Pivot to Asia was announced in 2011 with the most recent US-Australia Talisman Sabre bi-annual exercise and US-South Korea Ulchi Freedom war games this month, China has not remained idle.

In response to America’s vast array of military infrastructure built up on China’s border, China has responded by the unveiling of cutting edge anti-ballistic missile technologies, including hypersonic weaponry to counteract the American threat. A large part of China’s defensive response includes the Russian S400 anti-missile system which is also being adopted by India, Turkey, Syria and the United Arab Emirates as a unified system which renders the American THAAD and ABM systems impotent and obsolete. Although unconfirmed, American generals have freaked out that China is building a joint China-Cambodia naval base in Preah Sihanouk Province that gives China easy access to coastal waters on the Gulf of Thailand and ready access to the South China Sea.

America’s military impotence when faced with the new cutting edge technologies unveiled by Russia and China was outlined in a recent report released by the US Studies Center at the University of Sydney which stated that “America no longer enjoys military primacy in the indo Pacific and its capacity to uphold a favorable balance of power is increasingly uncertain.” Referring to China’s advanced anti-aircraft weapons, the report says “Chinese counter-intervention systems have undermined America’s ability to project power in the Indo-Pacific region” which the authors say, could be rendered impotent within the first 8 hours of conflict.

Rather than use this information to propose a new security doctrine premised on cooperation and dialogue as China has offered on countless occasions, the report’s authors join the fantasy world of Esper calling instead for a “collective defense” strategy akin to a Pacific NATO, whereby all of America’s Pacific allies could join in an anti-Chinese military alliance together, and relieving America of the burden of carrying WWIII on its own.

We know that this Pacific NATO has been discussed for some time and was at the heart of recent Pacific Vanguard naval drills conducted between the USA, Australia, Japan and South Korea in May 2019 which saw the participation of 3000 soldiers, two Japanese destroyers, a South Korean destroyer and two Australian frigates in their first joint war game. This outlook was also behind the August naval drill played out by Malaysia, USA, New Zealand and Australia in Guam. The USA has 54 000 troops in Japan and 28 000 in South Korea.

When China and Russia conducted their first long range joint air patrol in the Asia Pacific in July 2019, South Korea and Japan scrambled jets to intercept the Chinese and Russian aircraft, with South Korea firing hundreds of warning shots. Backed up by the USA, both Asian countries screamed loudly (and without evidence) that their air space had been violated.

In response to the belligerent comments by Esper and the Australian report, the Chinese Foreign Ministry said “China is firmly on a path of peaceful development and our national defense policy is defensive in nature”. China has gone further by providing a cooperative framework under the Belt and Road Initiative which is built around the brilliant political agenda of providing diplomatic solutions to geopolitical points of tension through economic development strategies that enrich all participants. This approach has provided China great payback through the defusing of tensions with other nations claiming territory within the South China Sea- especially under the pro-BRI orientation of Malaysia’s Dr. Mahathir Mohammed and the Philippines’ President Duterte.

Not feeling at ease being caught in the crossfire of a nuclear exchange, Japan and South Korea have also gone so far as to create a new trilateral cooperation agreement with China on August 21 premised on “next generation exchange projects in three countries… We hope to discuss future-oriented partnerships and regional affairs, including North Korea.” The agreement also enables international join investment in all countries operating under the BRI framework. Together the three countries account for over a quarter of the world’s productivity and have everything to gain by working together.

Those American military officials promoting the obsolete doctrine of Full Spectrum dominance are dancing to the tune of a song that stopped playing some time ago. Both Russia and China have changed the rules of the game on a multitude of levels, and can respond with fatal force to any attack upon their soil with next generation weaponry beyond the scope of anything imagined by ivory tower game theorists in the west.

The ship of world history has changed course away from the rapids of war and economic collapse, as the Belt and Road Initiative has grown to proportions not imagined possible just a few years earlier and the coming months will be decisive as the west does some soul searching and decides which future it would like to have.