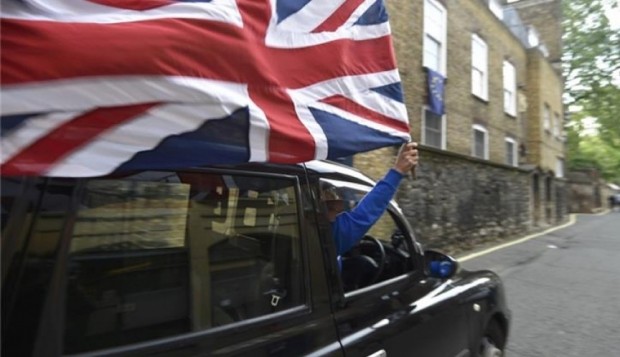 America Should Exit From NATO And National Security State

Above Photo: The Leave campaign won “because the EU establishment have made it impossible, through their anti-democratic reign, for the people of Britain to imagine a democratic EU,” DiEM25 said. (Photo: Reuters)

In its reporting on Brexit, the New York Times asks an interesting question: “Is the post-1945 order imposed on the world by the United States and its allies unraveling, too?”

Hopefully, it will mean the unraveling of two of the most powerful and destructive governmental apparatuses that came out of the postwar era: NATO and the U.S. national-security state. In fact, although the mainstream media and the political establishment elites will never acknowledge it, the irony is that it is these two apparatuses that ultimately led to the Brexit vote:

The Times points out:

Refugees have poured out of Syria and Iraq. Turkey, Jordan and Lebanon have absorbed several million refugees. But it is the flow of people into the European Union that has had the greatest geopolitical impact, and helped to precipitate the British vote.

But what was it that gave rise to that massive refugee crisis?

The answer: It was the U.S. national-security state’s regime change operations in the Middle East, including NATO’s bombing campaign as part of its regime-change operation in Syria.

What did U.S. and NATO officials think — that people would simply remain where they were so that they could get blown to bits with the bombs that were being dropped on them, by the U.S. assassination program, or by the massive civil-war violence that came as a result of the U.S. and NATO regime-change operations?

People don’t ordinarily behave in that fashion. Most people prefer to live rather than die and will do anything they can to survive. That’s why those refugees fled to Europe—  to escape the horrific consequences of interventionism by NATO and the U.S. national security state in the Middle East.

I wonder if deep down, those who are lamenting and groaning about the Brexit vote realize that: If there had been no U.S. invasion and occupation of Iraq, no regime change in Libya, no U.S. and NATO bombing and interventionism in Syria, there wouldn’t have been a massive refugee crisis in Europe and, almost certainly, a rejection of Brexit by a majority of British voters.

How’s that for dark irony?

Like the U.S. national-security state, NATO is a Cold-War era governmental apparatus, one whose mission was ostensibly to protect western Europe from an attack by the Soviet Union, which was America’s and Britain’s World War II partner and ally.

But as everyone knows, the Cold War ended more than 25 years ago. A question naturally arises: Why then didn’t NATO go out of existence once the Cold War was over?

The following statement by the Times perfectly reflects how the mainstream media and the political establishment elites just don’t get it:

NATO has rediscovered its purpose in the aftermath of Russia’s intervention in Ukraine. Yet the Baltic countries still worry whether the military alliance would truly defend them against Russian aggression, and the alliance has had trouble defining its role in fighting terrorism or dealing with the migrant flow.

What the Times is insinuating is that NATO is just as necessary today to protect western Europe (and now eastern Europe) from Russian aggressiveness as it was during the Cold War era.

But there is something wrong with that picture, something that the Times and the political establishment elites don’t want to focus on — that it was NATO and the U.S. national-security establishment that precipitated the crisis with Russia over Ukraine.

After the Cold War ended, not only did NATO decide to remain in existence, it began absorbing Eastern European countries that had formerly been in the Warsaw Pact. When the expansionary efforts finally reached Ukraine, NATO strived to absorb that country as well, which it came very close to doing thanks to a pro-U.S. coup that had all the earmarks of a successful CIA regime-change operation. Absorbing Ukraine into NATO would have meant U.S. bases, troops, tanks, and missiles on Russia’s border and the U.S. takeover of Russia’s longtime military base in the Crimean port of Sevastopol.

There was never any chance that Russia was going to permit that to happen, which led to Russia’s annexation of Crimea and the onset of the Ukraine crisis.

After all, imagine that the Warsaw Pact had remained in existence and had begun absorbing Cuba, Venezuela, Chile, Nicarargua, Guatemala, and Mexico, with aims of installing Russian military bases on Mexico’s border with the United States. What do you think the reaction among U.S. officials would have been to those provocative acts?

But what do we get from the mainstream media and the political establishment elites? That NATO is just an innocent party, one that is a force for good in the world, rather than a corrupt Cold War dinosaur-like apparatus whose mission is to provoke crises in order to justify its continued existence.

As I detail in my new ebook The CIA, Terrorism, and the Cold War: The Evil of the National Security State, it’s no different with the U.S. national-security apparatus that was also brought into existence to wage the Cold War against the Soviet Union and which fundamentally changed America’s government structure for the worse. After all, don’t forget: China and North Korea are national-security states as well. Totalitarian regimes are almost always national security states.

In itself, that’s problematic, but one thing is certain: The Cold War is over. It ended more than a quarter-century ago. Rather than be dismantled, which is what should have happened back in 1989, the national-security state, having lost its official enemy with the end of the Cold War, decided to go into the Middle East and provoke trouble with invasions, occupations, sanctions, interventions, and regime-change operations. All that brought us anti-American terrorist attacks, the war on terrorism, a formal assassination program, a massive secret surveillance program, indefinite detention, torture, secret prison camps, and other dark things that characterize totalitarian and communist regimes.

And yet the mainstream media and the political establishment elite just don’t get it: They see the national-security state as a protector and as a force for good in the world, rather than as a major purveyor of death, destruction, crises, chaos, and loss of liberty, peace, and prosperity.

It’s time for Americans to do some real soul-searching. It’s time to do some fundamental post-World War II alterations here at home. A great place to begin would be a dismantling of both NATO and the national-security state. An American exit from these corrupt and expensive Cold War-era apparatuses would lead the way to freedom, peace, prosperity, and harmony with the world.