Below is a final speech given by Bill Blum the author of numerous books and editor of the Anti-Empire report. Blum died recently and he is sorely missed. A memorial service will be held for him tomorrow in Washington, DC. We are unable to attend because we will be in Venezueala helping to stop a US coup. If you can be in Washington, DC we urge you to attend the memorial. It is being hosted by Covert Action Magazine and will take place on Saint Patrick’s Day, Sunday, March 17, from 4:00 to 7:00 PM, in the Washington Ethical Society building at 7750 16th St. NW (corner Kalmia Street), Washington, D.C. 20012.  Special guests—to be announced—will be speaking including Bill’s wife Adelheid and his son Alexander—both whom are coming from Germany. There will also be videos of Bill, a question and answer period, and a reception with food and drinks.

— The S4 bus line stops at 16th St and Kalmia, right in front of the door.

— The Silver Spring metro station is a short 15-minute walk away.

—  Sunday parking is ample and unrestricted on both sides of the street.

[William Blum left the State Department in 1967 because of his opposition to what the United States was doing in Vietnam. In the mid-1970’s, he worked in London with former CIA officer Philip Agee and his associates on their project of exposing CIA personnel and their misdeeds. Blum has since served as a freelance journalist in the United States, Europe and South America and has published numerous classic anti-establishment gadflies that have been translated into 15 languages. Among them are Rogue State: A Guide to the World’s Only Superpower (2005, 2014), America’s Deadliest Export: Democracy – The Truth About U.S. Foreign Policy and Everything Else (2013), and Killing Hope: U.S. Military and CIA Interventions Since World War II (1995, 2014), which Noam Chomsky called “far and away the best book on the topic.” Blum is a recipient of Project Censored’s award for “exemplary journalism” and you can follow his work at williamblum.org. The following is a speech Blum recently delivered at the Left Forum (2018), which you can also watch at our CovertAction Youtube channel. See the final speech on our panel entitled “Covert Action: Persistent Attacks Against ‘Democracy and Freedom,’ Past and Present.”]

Each of you I’m sure has met many people who support American foreign policy, with whom you’ve argued and argued. You point out one horror after another, from Vietnam to Iraq to Libya; from bombings and invasions to torture. And nothing helps. Nothing moves these people.

The most basic of these basic beliefs, I think, is a deeply-held conviction that no matter what the US does abroad, no matter how bad it may look, no matter what horror may result, the government of the United States means well. American leaders may make mistakes, they may blunder, they may lie, they may even on many occasions cause more harm than good, but they do mean well. Their intentions are always honorable, even noble. Of that the great majority of Americans are certain.

Frances Fitzgerald, in her famous study of American school textbooks, summarized the message of these books: “The United States has been a kind of Salvation Army to the rest of the world: throughout history it had done little but dispense benefits to poor, ignorant, and diseased countries. The U.S. always acted in a disinterested fashion, always from the highest of motives; it gave, never took.”

And Americans genuinely wonder why the rest of the world can’t see how benevolent and self-sacrificing America has been. Even many people who take part in the anti-war movement have a hard time shaking off some of this mindset; they march to spur America — the America they love and worship and trust — they march to spur this noble America back onto its path of goodness.

Many of the citizens fall for US government propaganda justifying its military actions as often and as naively as Charlie Brown falling for Lucy’s football.  The American people are very much like the children of a Mafia boss who do not know what their father does for a living, and don’t want to know, but then they wonder why someone just threw a firebomb through the living room window.

This basic belief in America’s good intentions is often linked to “American exceptionalism”. Let’s look at just how exceptional America has been. Since the end of World War 2, the United States has:

This is indeed exceptional. No other country in all of history comes anywhere close to such a record. But it certainly makes it very difficult to believe that America means well. 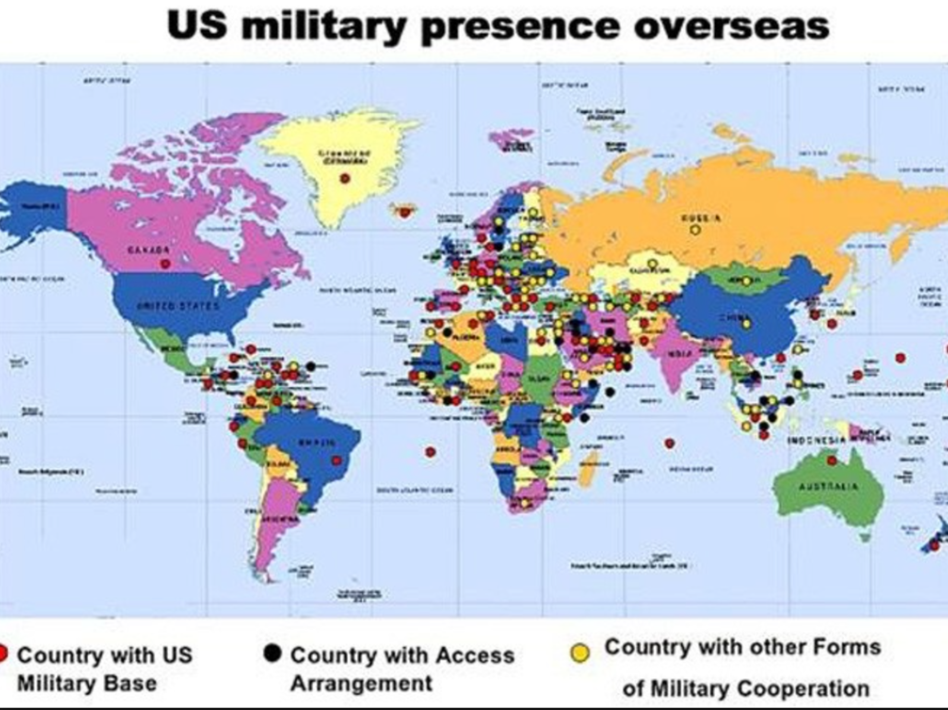 So the next time you’re up against a stone wall … ask the person what the United States would have to do in its foreign policy to lose his or her support. What for this person would finally be TOO MUCH. Chances are the US has already done it. Keep in mind that our precious homeland, above all, seeks to dominate the world. For economic reasons, nationalistic reasons, ideological, Christian, and for other reasons, world hegemony has long been America’s bottom line. And let’s not forget the powerful Executive Branch officials whose salaries, promotions, agency budgets and future well-paying private sector jobs depend upon perpetual war. These leaders are not especially concerned about the consequences for the world of their wars. They’re not necessarily bad people; but they’re amoral, like a sociopath is.

Take the Middle East and South Asia. The people in those areas have suffered horribly because of Islamic fundamentalism. What they desperately need are secular governments, which have respect for different religions. And such governments were actually instituted in the recent past. But what has been the fate of those governments?

Well, in the late 1970s through much of the 1980s, Afghanistan had a secular government that was relatively progressive, with full rights for women, which is hard to believe, isn’t it? But even a Pentagon report of the time testified to the actuality of women’s rights in Afghanistan. And what happened to that government? The United States overthrew it, allowing the Taliban to come to power. So keep that in mind the next time you hear an American official say that we have to remain in Afghanistan for the sake of the women.

After Afghanistan came Iraq, another secular society, under Saddam Hussein. And the United States overthrew that government as well, and now the country has its share of crazed and bloody jihadists and fundamentalists; and women who are not covered up properly are sometimes running a serious risk.

Next came Libya; again, a secular country, under Moammar Gaddafi, who, like Saddam Hussein, had a tyrant side to him but could in important ways be benevolent and do some marvelous things. Gaddafi, for example, founded the African Union and gave the Libyan people the highest standard of living in Africa. So, of course, the United States overthrew that government as well. In 2011, with the help of NATO we bombed the people of Libya almost every day for more than six months. 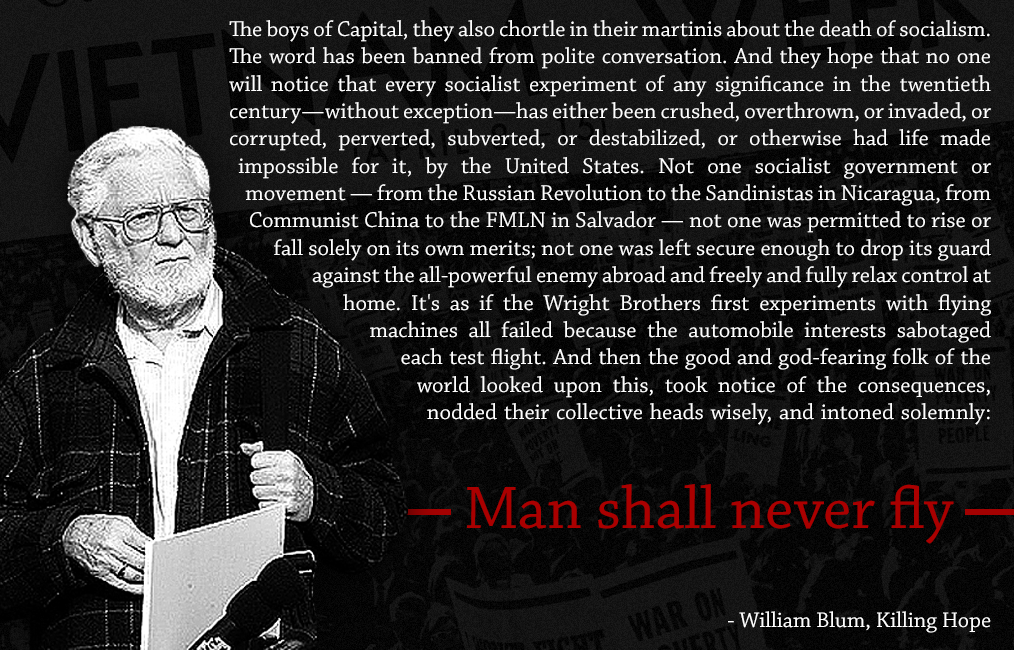 Can anyone say that in all these interventions, or in any of them, the United States of America meant well?

When we attack Iran, will we mean well? Will we have the welfare of the Iranian people at heart? I suggest you keep such thoughts in mind the next time you’re having a discussion or argument with a flag-waving American.